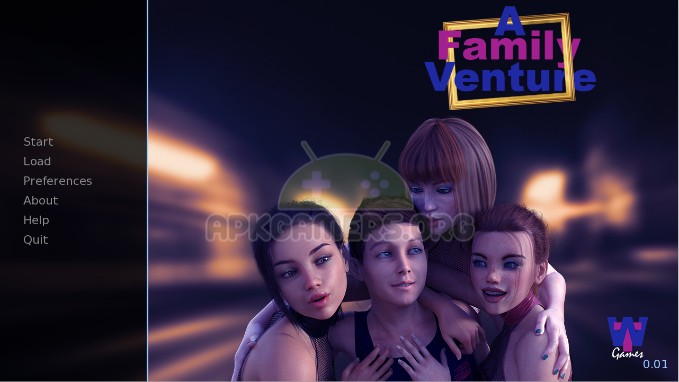 A Family Venture APK Android Port – Tony owes a huge amount of money to the Mafia, but when he ends up in prison, the responsibility of the debt falls to his only son, the mc, Ryan. Help Ryan develop his relationship with his mother and two sisters. With his father gone, there is nothing stopping the development of his Oedipal complex. And don’t forget the weekly payments to the mafia, because if they don’t receive their money, they will still take what they are owed in other ways.

v0.03b
294 new images
2,371 lines of dialogue
11 New events
New character
2 commission pieces from N7, a moderator at F95, and Frayed 80, a member of our “Family with Benefits” tier.
Note: Hint system works mostly, but is acting a bit funny, I’m not going to invest any of my time fixing it due to requests to change the hint system to be on the phone interface. I will add a bugfix file in the next couple days that will make this change, and fix any other bugs we may find.

0.07b Beta
This is the subscribestar supporter version. No incest or DRM mods are needed anymore and will break the game.
•Tons of bug fixes, big and small.
•The Main Menu Gallery now replays key events
•There is a new breakfast event, but it’s a very small window to trigger, thus it’s not essential for gameplay. It has to be after Camille and Mandy move in, but before the election starts.
•The stats button on the phone now tracks a few new stats.
•There is a new button that appears after you unlock the studio, that will take you directly to the studio.
•The events tracker on the phone now moves completed events to the bottom, leaving your next events to complete at the top of the list.

0.07 Public
•2 new mini-games
•53 Animations
•695 New images
•9,742 lines of dialogue
•13 new phone progress events
•New stats that can be found on the phone’s stat’s button
•New travel button to take you directly to the photo studio
•The events tracker on the phone now moves completed events to the bottom, leaving your next events to complete at the top of the list.
•Spelling Grammar checked (Thanks lapdragon!)

Everyday With a Foxgirl Plus: Perfect Edition [Final]