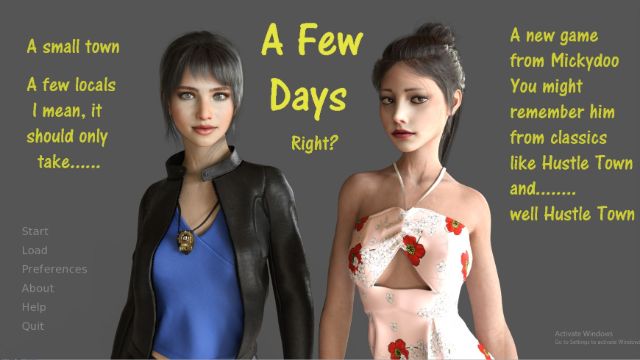 A Few Days APK Android Port – You are a Private Detective, you scored the easiest case in the world. All you have to do is sit in
a sleepy town and wait.
On your first day of what you believe is doing nothing and getting paid for it, you get roped into doing a little bit of private detecting for someone, which should only take a few days. Hence the name of the game.
Once word gets around that there is a Private Detective in town, a few people start showing up with their petty small-town problems, none of them can afford to actually pay what a Private Detective normally charges, but one by one you keep getting sucked into it, realizing slowly that all is not what it seems.​

Episode 11
I dont know how long this ep is, shorter than I think it is, but I have been doing a lot of learning this time round.
I know of an image issue on some of the first day locations, don’t shoot me over, I am unsure why it happens, does not affect the game.
There are 344 images and 24 (yes 24) animations.

Episode 10
Ep 10 aka Holiday special
Its only has 200 images and for the most part linear except towards the end where I do a few things to annoy you.
Its all about Charlie – It involves the story, it involves Charlie and doesn’t involve Christmas or any holidays.
A couple of known things
I personally may have made some typos after it was proof read.
And there is at least one image of his shirt I forgot to fix.

Episode 9
329 images and 14 animations
I have not updated the Gallery (it may even break if you click on it.) The gallery is taking more and more work/time, the more sex scenes, the more coding I have to do as it is not as simple as one would think. I don.t know what to do it about it at the moment.
THERE IS NO ACTION WITH CHARLIE (insert evil laugh) in fact she is not even in it that much. To get another full fledged EP out before Xmas I would really have to put my skates on so it aint going to happen, also over the holidays I sort of like a bit of time off. Soooooo, not a full fledged EP, would like to get something done before Xmas, Charlie???? I got me an idea. P
On the first day you need to go to various places, it does not matter in which order.
Now I have done it in this order –
Always the park first – there are 4 different locations there, they can be done in any order.
Then I have done the other locations in random orders and it seems fine.
NOTE – I have only ever done the park first, in theory it shouldn’t matter.
I would appreciate people going a different route and letting me know if it fucks up.

Episode 8.1
Major bugfix
-If you didn’t see the scene followed by Sue and Charlie telling you about the painting (The first you have heard of it) its back in episode 6
If you play through the game you will get that scene now, if you didn’t get the scene and have finished ep 8, if download this new version, right at the end you will be asked about it and taken there before the game ends.
– Fixed the scene to pick what girl to go to the island with, after returning, finding the camera then telling Casey about it there was nothing can do.

Episode 8
280 images
2 H-scenes with too many animations to remember (9 or something stupid)
Rewrote part of the chapter 7 after some feedback, you can pick which girl to take on the boat, so if you want to skip through the last ep to do so you can.
There is a very important scene at the beginning with the MC, Charlie, and Casey. What they discuss is not something I made up, on the notes screen after that scene there is a link to a youtube video of where I got the idea from.
I was asked to provide more than one H-scene, I have put two in this one, both are in evening and you can say no to them if you want, it won’t affect the game.
Because of the above, there a few locations you go to just to be told “Hey come and fuck one night”
It’s not as long (well not as big anyway) because of a few factors. One being rewriting some of chapter 7, the sex scenes and I am on those stop smoking pills which sometimes space me out (in a good way).
If you don’t get reference of a bloke with a can of paint (you need your sound on) google the opening of Saturday Night Fever.
I think that is all.
I played through the whole game and found an old bug, I don’t know why, so if anyone is playing from the start and it should all go smoothly, if not I fucked it, which is possible.
A few old typo bugs was reported to me in discord which I have fixed.

Episode 7 is done and it’s massive……..
…………for me anyway.
427 images
7 animations
3 different paths
In this episode three different paths emerge, they all revolve around Arthur Knight. They all lead to the same outcome, it itself will differ though, so will parts of the story that lead you there. There will be no differences in the overall story or any of the important bits.
On the credits screen is a link for script files if you want to look at the other paths, read the readme in the folder. If you are just here for the ride you will not miss anything important by not looking, nor will miss any romance, its purely there for anyone who is invested in the storyline and will just wind up using a save or playing it again.

Episode 6
-Hey all, there are a couple of things I am not happy with, nothing major. There is question thing with Lynda where I wanted to add more questions, and a scene with Di I wanted to add some more pics. However the last 10 days I have been sick (its winter here) and am still feeling like shit so I never got around to it.
-There is a scene with Liz which relates the one of three questions you asked Casey a while back, they will branch and fold back on each other.
-I have also re done some Charlie and Malena images.
-315 pics
-2 Sex scenes (one minor and missable)
-6 Animations

Episode 5
Sorry bout the delay but its finally here.
At the start of this EP Elle needs a hand with something, when she asks there is a little cut scene, if you click you will miss it. If you get in front of her and didn’t see it, go back if you want.
A report of a save file not showing up but the auto saves did, and it worked, so I dunno.
335 images
2 click arounds (or fuck arounds) 1 has a little reward.
5 animation’s in the H scene

Episode 4
300 images
4 Animations
Whiteboard law and order style for lolz
I had a bit of trouble with the code for this one, took me three times to get it right, hence the delay.
The whiteboard in the game is only for you to mess about with and add depth, you cannot break anything with, nor is it important.
There is one bit where you may or may not run into someone where the game asks if you have met them. This will only happen if you use the save from the last ep. It was a fuck up by me not putting a variable in.
You also get to ask Casey one of three questions, the next ep is going to go down three different paths that all converge, don’t ask me how yet, I only thought of it when I did the scene. (It’s kinda how I flow.)

v0.3
300 images
3 animations, the last one is a bit dodgy
The last animation is a bit wonky, I mucked it up three times as it is. But its now holiday season and summertime here, my pc is in the lounge cos I am soft and need the aircon, and I have people in my house. It takes me 4 or 5 hours just to make a animation in DAZ much less render it and get it ready for renpy, and that’s if it all goes right the first time. So there is nothing I can do about it.
This one is a bit simpler than the last one, I got more ideas just working out how to implement them.

v0.2
260 images
One H scene with 5 animations
There are two search puzzles, both have a cheat icon, this easy won’t be the norm
There was meant to be one more but it kept breaking
The first EP has been re done to match this (saves should work)
I have added a map with multiple daily locations, does not matter which order you go
Added a task list
Removed the stats and the time, they are irrelevant
Added a gallery
Update the UI a bit
There are case notes at the end to summarise
It’s been tested and broken and fixed 8 times by a group a beta testers
It’s been spell checked
H scenes are my versions of boss fights, save the girl, get the girl

v0.1
There are 193 images and one animation.
There is one sexual event with more or less the town tart.
Known issues
Sues mouth looks funny when she talks
Someone reported cannot find image bar.png but it is there

Stuck here what to do next

To be precise got stuck here

After tapping bot bin and garbage bag there is no other option available even in new update. Same old problem

Escape to the Suburbs v0.03B

When I Saw My Childhood Friend Girl After A Long Separation, I Just Said “Too Hot!” [Completed]