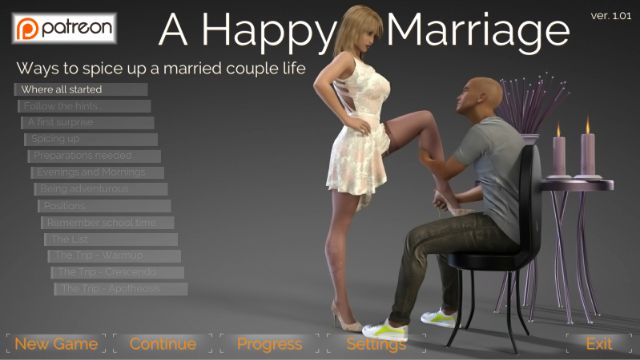 The story of Jenny and Jim married for 5 years but routine has set in the life of the couple. Jenny is sexually and professionally unsatisfied and Jim jerks off to porn whilst fantasizing about his colleague, Claire. Perchance Jenny finds an article in a magazine that acts like a catalyst that gets her back on the fun-loving and adventurous woman she used to be at college. And Jim makes the mistake of leaving his door open during one of his office fapping sessions which eventually leads him to agree to Jenny’s proposal, as indecent as he may think it is. Game on.

v1.12
With this chapter begins the final phase of the game, which includes 6 possible endings, two of which can already be reached in this release.
So a tip to all of you: make sure you have completed all the steps of the previous chapters, then save the game at the beginning of chapter 12 in order to have a restart point to be able to discover all the possible paths towards the different endings: I assure you which are many!
Another important note: as we are near the end, I have disabled the code for the extra content, which is therefore available by default.
Chapter 12 counts 725 new CGs and contains the first two Endings; but be aware that the decisions you’ll make during this chapter will have impact also in the final one.
You can control how you advance towards the different endings from the bars at the top of the interface: then it’s up to you to find out how to advance!

Chapter 11 Part 2
You’ll find 233 new CGs, some of which part of the extra contents

Chapter 11 Part 1
No extra content this time since it will be released with the second and final part of the Chapter.
A total of 406 new CGs is included.
Added three steps in three different storylines to be played.
Added a new feature in the settings screen. You can now enable a simplified handling of the hotspots that will remove them whenever possible; I mean they will remain if they are essential to determine paths in the game .

Chapter 10 Completion
Added 328 new CGs as long as 2 new animations .
Added two steps in two different storylines to be played.
Both added steps have various paths, based on your choices, so you’ll need to play them at least two times to discover all the new contents.
Added a new user setting (you can find it in the settings page) to simplify map cohort composition (the characters dragging). If enabled, simply click on the map destinations (the ones with a yellow mark) and you’ll get all characters positioned automagically! I hope this way it will simpler to follow the storylines.
Changed naming of Chapters Asset files in order to avoid problems from case sensitive contexts.
Chapter 10 Part 1
No extra content this time since it will be released with the second and final part of the Chapter.
A total of 386 new CGs is included.
Added three steps in three different storylines to be played.
Changed the download mechanism; now if you missed any chapter asset file, the game will open for your a webpage containing all the assets at once, so you can download them in a single zip, if you want to.

Chapter 9
Added five steps in different storylines to be played.
A total of 933 new CGs is included, along with 3 animations!
Extra content contains 6 new animations!
Changed and improved code to handle animations playback
Implemented a new function to highlight the characters (shiny effect on character’s icon) involved in the step when hovering the mouse over a location in the map. This way it should be simpler to select the relevant cohort.
Set by default the transition speed to maximum to reduce lags on less powerful PCs.

Chapter 8
No new content for now
Corrected some minor typos in texts
Corrected a bug causing a lock after Jenny’s second photoshoot (thanks to Corleone)
Changed main CDN for Chapters contents
A total of 786 new CGs are included!
Continuation of four storylines, with one step each.
A new storyline is opening.
Extra content is included (you need the extras code).

Chapter 7
Completion
A total of 378 new CGs are included!
Fine tuned a little more the “Chapter Assets” mechanics, so that the game is able to verify the presence of the right assets when you load a saved game.
A new storyline and two more steps; obviously, one of them is the first one in the new storyline.
Extra content is included (…I can only say in the doctor studio…): you’ll need the new extra content key I’m going to publish in the next post.
As usual from the last release, this is an incremental update to simplify and reduce download size. Simply unzip the files into the game folder you already have. If you deleted it, with the download you’ll be able to play all the contents of Chapter 7 (use the in-game download system to take other chapters).
Chapter 7 Part 1
Added ~500 new CGs
Part 1 is including three new steps in three different storylines.
Based on your comments, I changed the way the game is handling the chapter assets; I hope you won’t experience anymore problems for not having the correct files in your installation. The game now looks for them and advise you if you missed something: there’s also a convenient in-game download system you can use to retrieve the assets you miss; it’s up to you. If you don’t feel comfortable letting the game download the assets for you, you can always do it by yourself from the my main Patreon page.
Added a new feature: the “Big Picture”. You can click in the upper left text “Storylines” (in the Map Screen) to access a new “Big Picture” map of the complete story. You’ll find the storylines and steps (each one with it’s current state). A legend will help you understand the meaning of what you’ll find. I hope this tool will help you know better your progresses and if you still have something to discover.
Changed the character’s hints mechanic. Now you’ll see a “pensive” icon over the character in case he/she is involved in an open step. You can click on the character to see what he/she is feeling.

Chapter 5
At this junction you have played and replayed Happy Marriage. You have noted that there are three routes that can be played but all will lead to the same ‘finale’ in Chapters 10, 11 and 12. Chapter 13 being the endings depending on your choices or preferences. In case it was not clear, both Jim and Jenny are in an ‘open’ marriage at the moment so they are both aware that they can indulge in sexual relations with other people without requiring approval or participation from one another. That they choose to do things together or not depends on your gameplay. In this chapter we continue the three routes as our MCs move further towards their own sexual awakening and experimentation. Happy Gaming!
The chapter packs more than 520 new CGs (total CGs: 2200+).

Chapter 4
Added Extra content for Chapter 4.
Correct hotpost position (incorrectly behind the skip button) thanks to [SIZE=4]@[SIZE=4]patrickB[/SIZE][/SIZE]
Corrected a bug on the Extra Content logic for previous chapters thanks to [SIZE=4]@tombed[/SIZE]
After more time than I thought, finally, I’m happy to publish the new chapter in Jenny and Jim story.
You’ll find three different paths and 560+ new CGs (for a total of 1600+).
There’s also a first try with three animations. I hope they work since I’m quite new with the codecs and all that stuff. Please let me know immediately if you encounter any error.