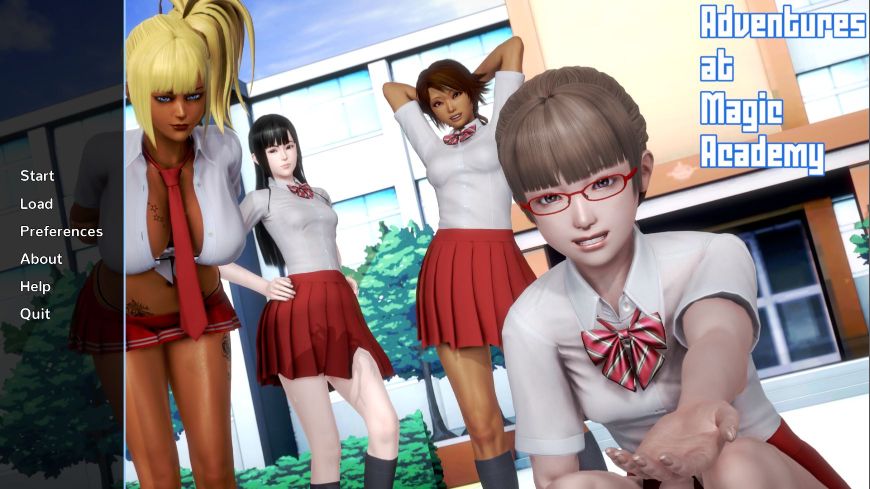 Adventures at Magic Academy is a science fantasy, adult visual novel and dating sim. You take on the role of Yuuto Kazama in a modern world where magic exists. The old ways of casting have mostly been abandoned, mages favouring technology to handle the casting of magic for them. Control Yuuto’s actions as you attend Ravenwood Academy as an undercover agent and attempt to stop terrorist organisations from causing chaos.​

Release 4
‘m using some new lighting in this release. There will be some disparity between new and old renders. I’m slowly converting the old renders to use the better lighting.
2 new locations: Cafe and Convenience Store. Convenience store is unlocked once you meet Asuka’s mom and progress far enough through Ayane’s events. If you’ve played previous releases then you may already meet requirements, in which case you should get an event upon waking up.
Added a skip time button to the map.
Ayane:
1 event added (takes place in your room in the evenings)
Asako:
4 events added
Asuka:
Doggy (repeatable) scene added
Ellie/Yumiko:
1 event added
Fubuki:
1 event added
Hana:
Cowgirl (repeatable) scene added
Minami:
1 event added

Release 5
I’ve introduced a stat decay mechanic. If you haven’t trained a stat in 7 days, it gets reduced by 2. I’ll be adding more content to the various ways of earning stats so it’s not just going to be grinding, but experiencing interactions with various characters. Fubuki for swimming, Mary and Rei for combat, a couple of side characters for strength and stamina etc. Look out for these in future updates.

Lastly, I’m still slowly converting the old images to use the new lighting. Obviously this takes away time from making new content so I’ve focused on new stuff but I’d like a consistent experience for new players.

Secrets Of The Valley Remake v0.4