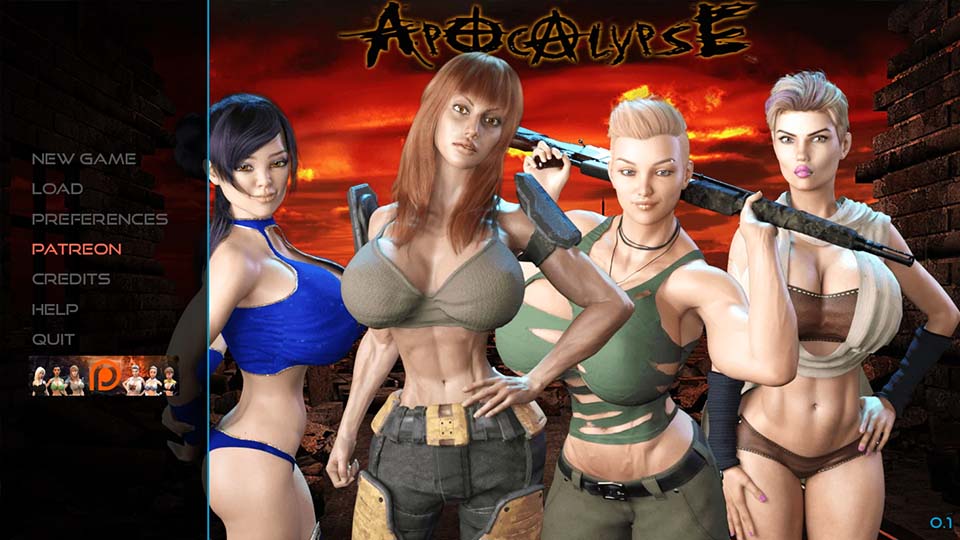 Apocalypse APK Android Port – You play as a young, muscle-bound, horse-hung hero who survived the nuclear apocalypse. After joining the Resistance compound “Eden”, your task is to build a harem, increase your skills, fulfill missions assigned to you and explore the surrounding lands, with the ultimate aim of avenging your family by removing President-for-Life Trumpf from power. The future of humanity is in your coc… err…. hands!​

v0.1:
As you will soon realize, the game is pretty much sandbox. Right now, it is a tech demo, so I’m letting the game play itself for one week, but there isn’t enough material for a full week if you try and repeat scenes with specific characters (I don’t want it to be grindy, so I want something to happen every time you visit a place), so you will hit some parts where it says a scene hasn’t been implemented yet. But mainly all the basics are there (characters, stats, all areas of the compound), so I just have to add more scenes, more dialogues, quests, explored areas to fill up the world. I already have some renders for other areas that I did not include because the scene was too preliminary. I welcome ideas for dialogue/quest options to raise lust points with various girls. So far, it is not possible to have a girl join your harem.

v0.2
This update focuses on expanding the outdoor areas to explore, and not so much on the girls within the compound. The next update will probably focus more on that.
It includes the following:
* 7 new outdoor areas to explore
* outdoors map system implemented – introduced in a new mini-scene during the intro
* mc stats screen implemented
* 1 Lena mission fully implemented that will trigger itself at the beginning of week 3
* weekend evening events implemented (dance night on Friday evening and virtual fights on Saturday evening – head to the bar at those times to trigger these weekly events)
* one harem girl available
* extra school scenes
* one extra science lab scene
* one extra pool girl to meet
* Can now receive messages from Ivanka Trumpf from week 3 and 1 extra Melania Trumpf call (her face and body was re-done also by the way, I mean IN the game…)
* a few more dialogues, but progress is lacking in that department
* new MC bedroom, didn’t like the previous one
* bugfixes (lust-spamming, minor glitches, typos)
New variables defined, so please restart the game, which will now run for a full four weeks.
Beware, the game will end in the destruction of planet Earth by the Glorglans if you don’t quickly get the available harem girl!!! If you find it too hard, open the console during week 2 (shift+o) and type: $ alienfuck = True

v0.3.2
* One new date with Ruby
* One new harem girl (Ruby obviously…)
* Ivanka pics redone
* Player can become a member of the NRANRA
* Player can acquire faction nicknames (Trumpsters and Road Warriors available so far, the Trumpsters nickname can only be acquired during the posing session with Barbara at this stage…)

v0.4
This update focuses on expanding the outside world. Game now “officially” runs until the end of week 8. You can also now FUCK IVANKA (literally)..

GAME MECHANICS HAVE BEEN REVAMPED:
* It now takes THREE training sessions to gain one point in firearms, strength, close combat or mechanics, but they carry on from one week to the next
* Close combat outcome is now determined by a die roll modified by the MC’s close combat ability and various bonuses and is played in rounds
* The outcome from shooting is now determined by a die roll modified by the MC’s firearms ability and various bonuses
* A 6 on a die roll always leads to a hit, while a 1 is a miss no matter what.
* MC can no longer choose the accompanying scout, which is now determined randomly
* Killing 10 camels now also leads to -1 in Club Sierra faction
* C-range hexes can only be explored once all B-range hexes have been explored and week is at least 4 (except Desert Town and the Forward Ops Base, if knowledge of their presence has been acquired)

* 6 new outdoor hexes available, including one multi-areas hex (Forward ops base)
* Stripclub in desert town now open for business!
* Re-ordering of the Supreme White House messages to account for possibly meeting Ivanka at the forward ops base (basically, Ivanka’s messages have been moved forward in time)
* 2 new Supreme White House Messages available (with both Ivanka and Melania together)
* Ivanka walk animation now available in the character interface after she is met
* MC can now choose to go on scouting missions with any harem girl. Some might end up being useful…
* More quests can now be completed (Queen Opala, Hammam)
* New sex scenes with nurse Rachel in the medbay that will trigger randomly
* 4 hardcore school day-dreaming sequences available from week 6 onward
* Firearms training scene completed
* New skill can be improved during class starting from week 6 onward (French)
* Extra hidden stone available for those who choose not to buy Zara
* And the MC can now catch Covid-19 too…

v0.4.1
This update focuses on expanding the outside world. Game now “officially” runs until the end of week 8.

This is a smaller update than the previous one, hence it’s called v0.4.1, but it’s still a decent update I hope you will agree. It includes:
* Amy as a new harem girl (but harem limited to 6 girls max at any one time)
* Bounty Huntress can now be met (random encounter when going out to explore the world)
* New Ivanka scenes (attached to the bounty huntress encounter)
* Dr Evil’s pendulum can now be used on various girls
* Random side-stepping to the gas station when going out on a scouting mission with Penny
* Queen Opala’s close combat scene implemented
* One new hex available
* Suki’s day-dreaming school scene implemented
* Date with Marnie now available
* Zara can now be met at the pool (in order to allow her to re-join the harem)
* Ruby can now also re-join the harem

Bugfixes: pregnancy was going twice as fast as intended in previous version, now it will take 8 weeks. Girls cannot get re-impregnated except for Taylor. period out of range error fixed after doing too many things at Church, other minor bugs fixed.

v0.7.1
OUTDOORS: 2 new areas to explore. One includes an MFF scene.
OUTDOORS: Added 2 stripper scenes with Heather at the stripclub in Desert Town.
COMPOUND: New Close Combat training scenes in the dojo.
COMPOUND: Date with Clara at the Red Canyon implemented.
HAREM: Clara as a new harem girl.
HAREM: Ayla can now be impregnated. Don’t forget about the pdf hints guide (in your game folder) to help you along!

v0.8.1
OUTDOORS: 3 new areas to explore, one including MF sex.
OUTDOORS: One new scene with Krista.
GAMEPLAY: French level now only goes up one point per three French classes attended.
INTERFACE: New character with walk animation (Paulette).
COMPOUND: Private French lessons can now be taken wih Barbara a the bar in the evening.
COMPOUND: Date with Barbara at the Red Canyon implemented.
HAREM: Barbara as a new harem girl.
HAREM: Barbara can now be impregnated

We disable comments to the public due to high volume of traffic and spam comments, Commenting is only available for VIP members.
0 0 votes
Total Game Rating
Subscribe
Please login to comment
4 Comments
Newest
Oldest Most Voted
Inline Feedbacks
View all comments