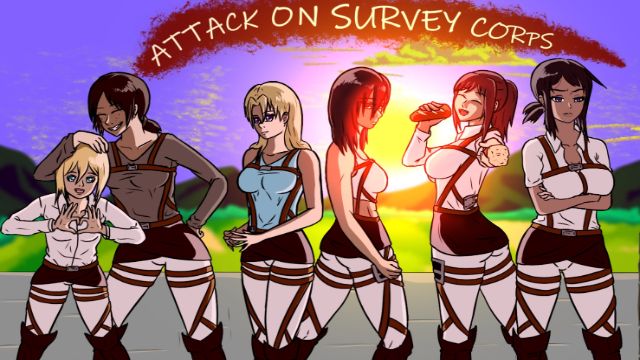 Attack on Survey Corps is a game set in Attack on Titan universe. In the game you’ll meet a lot of familiar (and fuckable) characters, quests, and stories to follow.​

v0.7.2
1. The eatery background’s been redrawn
2. A new story with Mikasa involving training/ combat mini game/ NIGHT SCENE with her
3. The continuation of story with Elsa, a new mini-game with girls. This mini-game will become a proper repeatable thing later on, right now it’s to push the story further.
4. New events with Ymir. To see them, (if you use old saves), go to sleep late at night after you’ve trained with Historia balancing on the ropes.
5. New night scene with Historia (this scene is crucial for Ymir’s branch which will be expanded later on)
6. New main game menu. The girl on the main menu will be changed everytime a new update is out.

Overall, I suggest you start a new game if you want to see all new events (Ymir/Elsa). However, you can just skip this suggestion for it won’t break your game.
Android users, you should have no problem now updating the game, saves should be transfered automatically.

v0.6.2
1. A new night scene with Elsa
2. A new night scene with Sasha
3. New events with Historia (including the H-scene)
4. New events with Sasha (including H-scenes)
5. New event with Ymir
6. New, fully redrawn world map/Female dorms’ hallway redrawn
7. Girls now wearing canonical uniforms. Completely redrawn. Some of the girls active buttons are redrawn (some others are yet to be redrawn)
8. A small introduction of a new character
9. A new location’s been added
10. Some small bugs were fixed and crashes that occured on Android 11 should be fixed now! The game’s also been translated to Russian.
11. Two new avatars have been added to the “Friends of the Project” list!

A few words about saves compatibility. All saves starting from 0.4 should be compatible (though I don’t really recommend using 0.4 saves).

On PC, if you played 0.5, the game will find your saves from 0.5 and you’ll have no trouble continuing from where you left off. If you only have saves from 0.4, first copy paste your saves and then make sure to transfer them to 0.6 saves folder.

v0.5
1. New interactions with Elsa within the new story branch
2. New backgrounds (shady alley, classroom, Hange’s room)
3. Revamped female’s dorms, to be precise, sleeping rooms. (the corridor’s next in the line)
4. Hange’s been added to the game along with someone else.
5. All girls’ sprites have been redrawn.
6. New story event with Mikasa in the steam room.
7. New night interaction with Historia.
8. The first implementation of love system in the game.

v0.4
1. New events with the instructor with two different branches that will keep being further expanded in the next updates
2. New event with Sasha that might become a “repeatable” event later on where you can do more things to her
3. New event with Historia which serves more as an introduction to a new location (next update will have some more interesting event with her)
4. Night sequence with Mikasa
5. The instructor’s hat has been redrawn and there’s an event where you look through her belongings.
6. New code and an option to skip the prologue
7. Lots of other small fixes/edits

v0.3
1. A few new events with Mikasa, the options you pick in this update will matter in the next scenes with Mikasa.
2. A new event with the Instructor which will be continued in the next update
3. A new event with Historia
4. New sprite of Mikasa with a bunch of face emotions
5. Now Sasha’s face emotions work correctly in all dialogues
6. Backgrounds for Sasha’s training sequence
7. Now all girls have sleeping pics. Time to add some night actions in the next updates.

One important note. It’s possible to be on both Sasha/Mikasa’s routes but it’s best you go after Mikasa first ( talk to her on the field before getting into Sasha’s branch, then it’s no problem) and only then you advance Sasha’s branch. We’ve found a workaround for now but in time, we’ll have to rewrite the whole game from the scratch otherwise there’ll be huge troubles in future. All thanks to our first coder.

We’re aware that if you’re supposed to go wake Sasha up and don’t do that and instead go to the field to Mikasa, she won’t be active (but if you do wake Sasha up, Mikasa will be active on the field). Alas, this is the best we could come up right now. In time, this will be fixed. Should you encounter any other bugs, please, let us know.

All this shouldn’t worry you. The next update’s in the works and we’ll probably release it this month. So yeah, it doesn’t mean the next update will be out in half a year. You won’t even notice it when we rewrite the code.