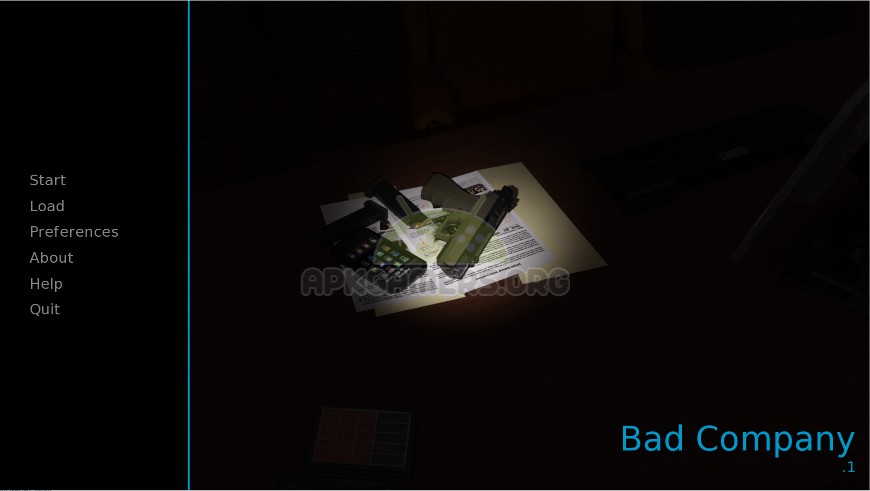 Bad Company is a murder mystery/revenge story with sexual content. I won’t go into too much detail. The reader will be following the story of Marcus (you can change his name.) He is the only heir to one of the largest private military company in the world call The Company. At the age of eight become an orphan when his parent die in an accident. With no living relative it falls on Anthony Smith (his father best friend) to take charge of the young man and his family business. Until he reaches his eighteen-birth day. (Which is the beginning of the story.)

v0.221
This version mostly focus on the story. And fixing languages issue.

v1.0
I added 3 animations in the game just a place holder. (I mess up and cant edit the green scene out) Rachel peeping scene now has a few more render and animation and the choice you make does somewhat affect what happens later and you could get the first bad ending. Only good thing that came out of the mess I was in is that I am now able to pack the android version. I can’t test it tho so let me know if it doesn’t work or something.

v1.3
Ok This is te v1.3un. I have planed add more scene into this version as well as mini bonus and something to entertain you guys but to add all that will take more time.
There a few scene that clip but or floating but it wasn’t too if I go back to fix it mean 2 thing 2hour of rendering for one of them and redo the whole fight scene to fix barely noticeable 2 floating. I will revisit the fighting scene with float character since I am not quit happy with it and to add blood. When time allow.
This unofficial update have 160 Full HD render. 2 sex scene you guys know i ain’t no cock tease. I’ll leave that shit for some other fucking cock teasing dev. 4 years worth of waiting and the bitch still cover up their tits. seriously. 3 fighting scene more of the mystery uncover.
Im only release [un] version for patrons only if you going to put it out on F95 or another page I don’t really but please wait 5 to 10 day before you do.
If anybody need Android please let me know. I have to send it out for some one to make it and he on vacation with his kids. I don’t want to bather him unless one of you guys need it.
FYI I was told old save doesn’t work.
V1.3unA fix crash at near end version

v1.4
This version is a little short because I had to reinstall Daz (mistake with the first installation wrong HD) I ran out of HD space.
Because of the new installation not sure what DAZ people were thinking, but they change the location for a ton of content I had to find and relearn their location again. It gums up the work. I adjusted now. So the next release should be faster and with a lot more content.
I did some house cleaning. When back and fix up some of the coding mistakes, I’m sure I still miss a few. Feel free to point out anything I may have missed.

Also, I really hate to beg guys but at this point, I have no other option. I am operating in the red here, As is I barely got any support. What little I get does not even cover the interest for what I spend on render PC and replacement parts and License for Daz content. I’m in over my head, and if something doesn’t happen soon, I am going to drown.

In hindsight this project is way too big for the first project. I should have started with something smaller.

Plans for the futures

If everything works out and I can make this my full-time job. Once this story complete, I have a spin-off story (based future content for Bad Company) for this VN in the draft. I also have about five drafts for entirely new stories already written out.

v1.5
This version is the end of chapter one. Chapter two is being work on right now. Few character might get a face lift for chapter two. like the main character might get a new skin, and Jen might get new skin as well. Goal for chapter two is to make it a game not just a vn. I am designing a system for it. (No promise)
There two side story that I’ve been working slowly. I probably push those two out while i design a system for chapter two. They are short story feature 1 female character on the first game and 2 character on the second game. again I will give you more detail as they are being available .