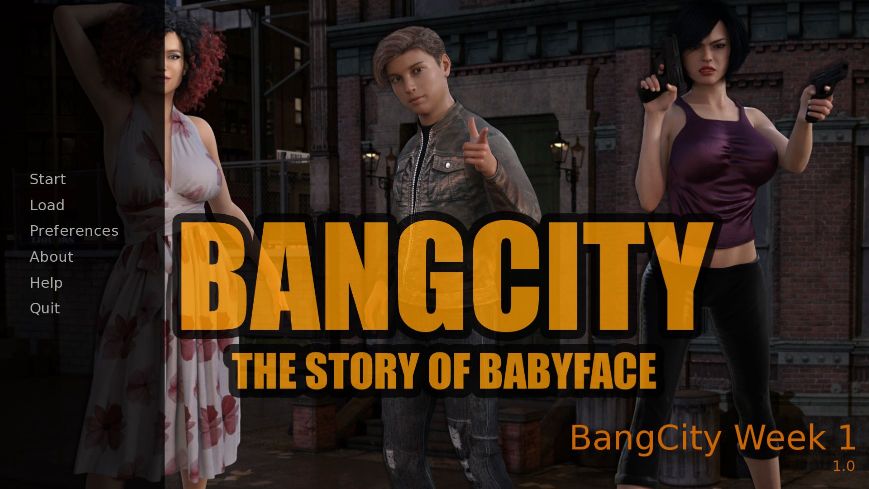 BangCity is a rundown place ruled by gangsters and corrupt politicians! The hero of this game is Babyface! Grown up among criminals he decided to go his own way after the gang was busted. Now he has to build up a new life and starting his revenge against all who did hurt him!

MC has to gain control over the gangster’s wives and needs to get closer to his Landlady, Valerie!​

v0.11c
– About 300+ new pictures.
– Sit on the couch at evening to smoking weed with Valerie with more options
– Another training with the gang ladies
– Sometimes Valerie waits in MC’s bed after work at noon.
– Valerie wants to go to the movies with MC!
– Another scene in chapter 1: MC takes care that the bitches can go shopping without being reported to the police.

v0.05
Week 5
Babyface is still hurt and needs Valeries helping hand while Tiny Charles is still in the gang-hideaway.
At the end of the week, Babyface can make him leaving the house.

There will be more help from Valerie.
More scenes with Valerie in her bedroom, basement, shower and living room.
New plots:
Photo shootings with Valerie.
Search for Tiny Charles in the gang district
New Actor: Emma

Technical changes:
Display of Valerie’s mood and intimacy level (to be improved later)

v0.07
Another week in Babyface’s life:
– Babyface meets someone again and fucks up.
– Valerie decides to tutor Babyface
– Babyface finds out where Charles is hiding.
– Photoshooting with Valerie
Fakeday feature:
Relive a few select moments from the game so far.

v0.09a
– MC starts to eat Valeries pussy
– Sideplot – The photo studio
– Punishment system – Spank the bitches to raise there motivation and income!
– MC is forced to go to the bank and withdraw money if cash is low
– New city map (not perfect but better)

v0.09b
– A new photo shot with Valerie
– More fun in the basement. You can smoke more often now, but Valerie might get angry if you smoke to often.
– More pussy eating
– MC strokes the G-Spot

v0.10a
– Having fun with Diane
– First time sex with Valerie

GUI
The game now offers more options. It now has a stronger free roaming character again, but don’t worry:
exclamation marks show you what to do next to proceed
So you are free to follow side plots or progress in the main story!

I removed some options that seemed pointless to me(for example if Val sleeps with MC while he is injured. I am sure that almost nobody sent Val away.)

Chapter progress
You can only advance to the next chapter if you fulfill all conditions.
But this is not a problem, because the exclamation marks show you what to do next to proceed.

Images
Single images have been added to various parts of the previous content to better visualize the events.
Individual images were re-rendered if the quality of the older images was not good enough.
The images for the scenes at Dwayne’s place were completely reworked. We only see more of his apartment.

Story in the intro:
After MC finds the suitcase with money, he leaves the Gang Hideout and rents a place in the trailer park.
The trailer park rent is now more expensive and MC rents the trailer for half a year.
From there he looks for a job and then also starts looking for Valerie.
Tiny Charles is not looking for a keycard, but for some documents.

Alternative gameplay
The dates with Vivian and Kim now offer the option to fuck with the girls instead of screwing up the dates!
IN a later version you can meet them again and go on a date with them!
Gina can not be send back to the hideout after MC meets her in the alley!

New sideplots:
The Tireshop is now active. Sally is already waiting!
The Influencer is now in town. The plot starts on day 15 or with chapter 5!

Emma is out of the story for now.
She has no important role and I have no plans for her for now.
She started an internship at a development aid organization after her meetings with MC and will probably show up again later.

Savefile
Old savefiles will not work!
There is a savefile to start with in chapter 5. Load it and rename your MC and then meet Diane directly while she is sitting with Valerie in the kitchen.
With this savefile you can also see the sideplots from the beginning!

Info about v011.b
Next I want to work on the scenes in the gang hideout and the gangster story. But also the other content will be developed further.

v0.11c
– About 300+ new pictures.
– Sit on the couch at evening to smoking weed with Valerie with more options
– Another training with the gang ladies
– Sometimes Valerie waits in MC’s bed after work at noon.
– Valerie wants to go to the movies with MC!
– Another scene in chapter 1: MC takes care that the bitches can go shopping without being reported to the police.

Unaware of the World v0.24d Basic

Plans for You [Completed]