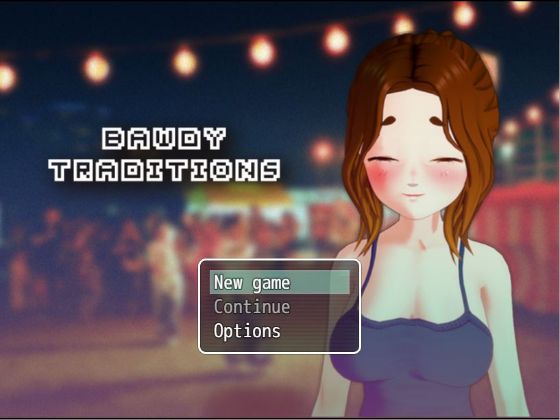 Bawdy Traditions APK Android Port – A married couple travel to a town in the middle of the mountains to make an article about their traditions and festivals but things start to get out of control. The first impressions of the town are very good, but the villagers seem to be a little in need of affection. How will Leyna manage to be the only attractive woman in the area??​

v0.9b
I have to inform you about a couple of very very important things about this version, the first and most important is that unfortunately you have to play from the night festival event (the one where Leyna has to work at the food stall) to avoid bugs that affect this new version, I apologize but it is absolutely necessary.

The other thing is that the last event of this version is still to be finished, you can get to the end of it and it is still an event but in the route of more corruption the final big part is missing (which I will deliver next week)

This version includes:
three new events:
– the duel
– photo session at the festival
– the ritual
– four repeatable mini-events at the festival
– Bug fixes
– b: added invisible text boxes before continuing to the following images so that you can enjoy them without the text being in the way

v0.6.5
-New events “bar job part 1″,”Johan and Alexa?” and “bar job part 2”
-Various bug fixes
Good day guys, here we bring the new version of Bawdy Traditions!
WARNING! you HAVE to redo the scene from the last photo shoot that Johan and leyna do together to avoid bugs in the actual version.

v0.5.2
-New event at the hotsprings.
-New event with the photographer.

v0.5
– New event at the river
Bugs fixed:
– If you don’t do the prison event when you find the prisoner in the woods, the conversation is different, and then the prison event disappears (to make sense).
– If you don’t do the bottle event (where you find the kids at night in town and you have to get the alcohol from the groceries store). when you meet them at night in the bonfire event, you recognise them from the adulthood festivities, but not from before. This event will be available later if you want to do it.
– We deleted the corruption point from 15-16 approx, and we are using decisions instead.
– We detected many people were stuck between the 1st entrance at the festival and Johan’s dream, so we blocked the entrance to force you to talk to the worker again
– Minor bug fixes and typo errors

v0.4.2
One large event at the festival with an animation
Some minor bug fixes

Hotfix:
Police station: you can’t do the event when Leyna is alone
Picking flowers: You can’t enter here before speaking with all the job offers
Alexa festival: you won’t be traped when seeing Alexa in the forest

v0.3
We have improved and expanded the dialogues of the following events:
Bar scene 1
The scene with men by the bar
Bar two: the bet
In general, improve some loose dialogues to make events make more sense.

v0.2.5
– Day and night cycle (you can explore the map at night but there’s no content yet)
– Bugs fixed
– Now you can carry objects in the mini-quest, (i.e the photographer’s package and the tools bag)
– Corruption counter added
– 3 new scenes (photographer part 3, the fitting room and Johan’s dream)
We recommend starting a new game to avoid errors with the changes and bugs that we have fixed.
Choices DO MATTER. You can choose to corrupt Leyna slowly. For example, at the bar (part 2) you can accept the bet or leave. Depending on which, you’ll win 3 or 0 points.