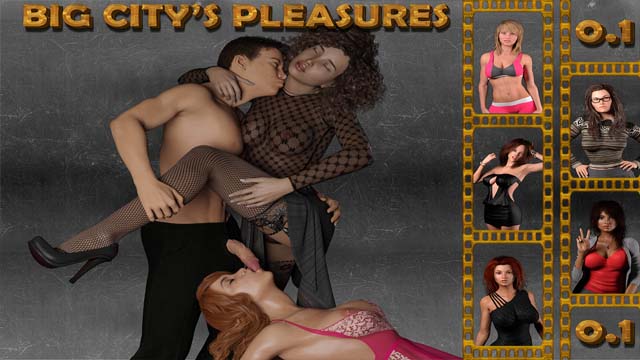 The game is about Tony, a young boy who lives in a village far from the big city and has to move to live in it to study.
Luckily his childhood friend Gina allows he to live in a room at her apartment.
And with this he begins his adventures, meeting again with his friend and other girls from the city.
Soon he will find himself in unusual situations for him that will make discover his sexuality in many ways… but not everything is what it seems in the city, and Tony will be involved in more than a mystery.

Interaction with Gina (asleep) and Jessy:
New scenes for the romantic film (4):

Interaction in the store:

Recommendations
– Activate the audio, the experience will be much better!
– Enjoy each scene slowly and with love 😉

Interaction in the apartment:

And… one last surprise…

Initial notes:
Due to a poll in our patreon, this update has been specially dedicated to Katia. The scenes with her have given us a lot of work because we wanted to build a good story without precipitating events; this has caused a great delay in the publication of this version and, not to delay it any longer, we have been forced to skip the continuation of the scene with Gina, which we regret.That’s something that may surprise you if you start playing from a save file in that scene… it’s a bit abrupt since there’s no continuation. Please keep that save file so you can continue from there as soon as we publish the next version; that version (v0.2.4) will be only and exclusively dedicated to the continuation of the scene with Gina, so it won’t take as long to publish it as this last one.Having said that, we hope that the work done with Katia has been worth the effort and that you enjoy it!

New Scenes:
Interaction of Katia (Queen of this version):
You will be able to make multitude of visits with diverse variations and to evolve a lot in the relation
Interactivity in “action” scenes
Katia will tell you her big secret 😉

Introducing Megan:
You’ll finally meet Megan.
Several scenes with her and an interesting story with a… foreseeable ending 😉

Interaction with Cassie:
Cassie has a surprise for the “town boy”, don’t miss it!

New Scenario:
The Fashion Shop
New Character (a hot one, hehe)
Use it to buy the clothes you need 😉
*Note: At the moment it has adapted to Katia’s missions, but in the future there will be much more variety of clothes to choose from 😉

New replay system:
In the main menu, if you click on “EXTRAS”, you’ll have the possibility of repeating scenes of the game once you have unlocked them (they unlock automatically when you see them).

Known Issues:
One animation with Megan has a different lighting and you can see the change; we will correct it in the next version (minor problem).

v0.2.4
579 high-quality images carefully created with attention to every detail !
32 new animations, some of them with realistic physics simulation technology !
New music and sound effects
Great stories, feelings, and good times for you to have fun >;-)

Initial notes:
This version is especially dedicated to the “continuation of the story with Gina” that was left pending in the previous version; she is the real protagonist and I’ve tried to create a realistic and beautiful story with her and the protagonist (you); I hope you like it and that it evokes in you the same feelings that I had in its creation.

But there is much more than Gina in this version >:-D

Continuation of the story with Gina (Queen of the game!):

Interaction with the shop assistant:

Special Ending:
I prepared something special for the end of this version, I hope you like it 😀

DEV NOTE:
I don’t recommend playing this version yet, it contains some bugs; wait for v0.3.1, it will be released very soon​

New programming: Many changes and improvements have been made to almost the entire game!

I want to take advantage that I’ve commented all these changes to thank the one who has made it possible, 0x52, he is the new programmer who has collaborated a lot in this new version, a real professional who has taken this game to a new level (IMHO),

More content: Many new images and animations… but mainly animations, this is the version in which more animations have been generated by far! But it’s not only the quantity, but also the quality of them; they have been created with much love taking into account every small detail and using the latest technologies, I hope you enjoy them!

I take this opportunity to thank Wanderan, who has been the architect of the script in the scenes with Charlene, creating a wonderful introduction to her world. And he has also helped me a lot with the translations.

Thank you very much Wanderan!

IMPORTANT NOTE:
Due to the many changes in programming, the old save files don’t work, but you will be able to fast forward the scenes you have already seen.

Will there still be an update????

Is the game on this site complete? Or is it abandoned?

I Am My Sister’s Keeper [Completed]