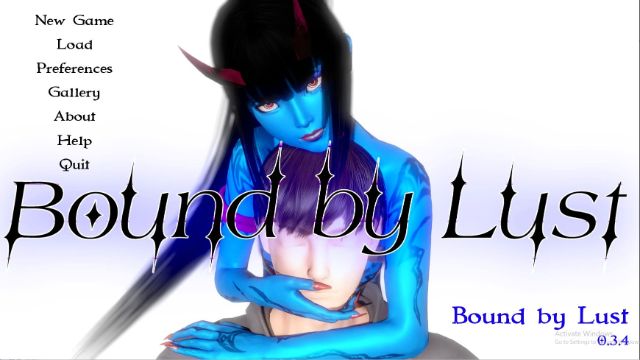 In Bound by Lust you play as a young man ready to begin his life anew in the big city. Increase your stats and build strong relationships.
You’ll meet a lot of different people with interesting “personalities” that will either help you succeed or stop you from achieving your goals.
But be aware that your life might not be so normal after all.​

Special Instructions:
– Unzip and install apk.
– Grant storage permissions on first run!
– On first run you will get a prompt to copy the archive.rpa file to documents/Wills747/bound.by.lust/game folder.
– Copy the rpa file to the directory indicated in game. (game will quit now) Restart the game.
– Keep in mind if your default install location is an actual SD card this may slow the launch.
– Advise keeping gl2 disabled unless you have a PowerVR gpu or experiance video problems.

v0.3.9
-Added Normal path for Nina.
-A new event with Anath can occur in the morning (Requirements : All Heather events and all Natalie events.)
-Fixed typos and added two new pictures in the phone.
-Small bug fixes

v0.3.8.9
A new character and old ones with new events and better animations.

How to unlock the new extra character.

Had a bit of a struggle to release the new version but it’s finally here. I’ve reorganized some stuff in the game so from now I’ll be able to upload small patches with new content monthly
here on patreon. All you need to have is this new version, then when a patch comes out, just copy everything inside the game folder and you’re good to go!

To unlock her event you need to have completed:

Now Natalie has a shower scene too.
New night scenes for Anath and Karen.
Now secret images of MC’s dreams will be recorded by Anath in your gallery (Complete various events to unlock them)

v0.3.6
To unlock Jane’s events, make sure you spend some time in the library to increase intelligence, study from your pc and then take some lessons from Heather if you haven’t already. Then Jane will fall for you, unlocking 4 new events!

And don’t forget to visit the library multiple times because a presence lurks there and to unlock it, remember to complete the second event at the shop.

For Suzie and Dana, you have to finish Dana’s first event and Christine (the P.E. teacher) swimming pool event, then you’ll receive a message from her. From there it’s easy to unlock the rest, just go to class every day in the morning. Also, if you like a certain fetish, you’ll meet a new character during Dana’s event, so don’t miss out!

And for the dommy lovers out there, Ayla has a new event. To unlock it, you just need to complete her first one, and she’ll send you a message once you get back home in the evening. To reach her house, you’ll get a prompt when you leave from the front door of your house during the afternoon/evening.

v0.3.4
More than 90% of my very first release has been remade.
New function to filter content has been added.
New intro scenes and story update.
New scene gallery.
45 new animation and 2400+ renders.

v0.3.2.2
More bug fixes.
Now for future bugs, you just need to download a small patch and not the whole game again.

v0.3.2.1
Many Bug Fixes.
ROCKET TITS FIXED.
Now you can reply to the messages you receive from the girls.
New scene with the scientist, Karoline.
New scene with the art teacher, Vanessa and the student, Kaoru.
New scenes at the coffee shop during the mornings and the evenings.
New Karen bathroom scene in the morning (It’s randomized between Karen, Jane and Natalie so you may have to rollback a couple of time to see it or try and see who’s in the bathroom every morning. )
Remade v0.1, v0.2 and v0.3 scenes:
– The 3 night visit scenes with Karen, Jane and Natalie (They are now also accessible every night).
– The BJ scene with the wife in the intro is now longer with more animations.
– Some clunky animations with Anath.
– Some clunky animations with Jillian(I also added an extra one).

Life of Your Dreams v0.5