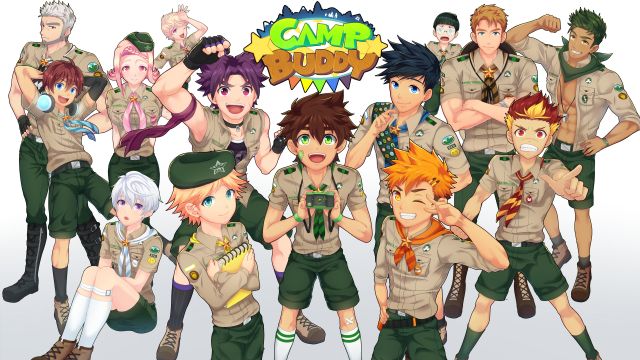 Camp Buddy is a Boys Love / Yaoi Visual Novel that features the adventures of Keitaro Nagame in the summer scout-themed camp called ‘Camp Buddy’. At Camp Buddy, Keitaro along with his childhood friend, meets his fellow campers, each of them having distinct personalities and stories to be told. Keitaro has also yet to discover the dividedness among the campers that threatens the camp to close down. It’s up to Keitaro to unite the campers once again and make Camp Buddy a great place to be for everyone. Help Keitaro with his decisions and create a special bond with your chosen partner. Take the chance and make the greatest memories.
DLC – There are tons of new and exciting features for all of the routes, as well as a new, highly detailed secret romance route for the game’s villain, Taiga!

v2.0
New Features:
Taiga Secret Romance Route has been added to the game.
Taiga’s character design has been updated.
Save Slots has been increased to 96
Added 12 New Animated Scenes in the 4 Main Routes.
Foreplay Minigame on all routes is now animated.
Animated Scene toggle has been added to the Display Settings.
Fundraising Scene Art has been added to all routes
Animated Scenes have been added to the Main Gallery.
Opening Video Player has been added to Secret Gallery
Fanart Gallery has been added to Secret Gallery
Poster Gallery has been added to Secret Gallery
Added new soundtracks to Music Player
Added new costumes & characters to Sprite Gallery
Added new Ending Credits video.
Added Bad Ending Scene Art on all routes.
New Cameo Characters: Yuuto, Haruki, Chiaki, Noah, and Fanart Contest winners have been added.
Updates / Bug Fixes:
All animations have been disabled for Android Version for maximum optimization.
Fixed Keitaro animated scene bug in Yoichi Route
Fixed consistency issues with Taiga’s character design in all Sprites and Scene Arts in the game.
Fixed consistency issues with character’s number patches across all arts in game.
Taiga’s voice actor role has been recast to Ezra Payne
Sprite Voices & Full Voiced Scenes volumes have been normalized
Missing Voice Cues has been fixed.
Various Gallery Scenes that were broken are now unlockable
Implemented additional sound effects for all routes
Fixed various duplicate lines & incorrect text such as typographical and grammatical errors
Updated Chibi heads in Chat Log & Galleries
Cameo character: Knox will now only be exclusive in Camp Buddy v1.0, v1.1 and v1.2. (Creative rights/ownership of the character have been given to his original designer)
General UI improvements
Updated Bad and Worst endings of all routes

v1.1
PERFECT ENDINGS
We have fixed the serious error that crashes the game and disables unlocking the perfect endings of all character routes. We are very sorry for this inconvenience.
To unlock a perfect ending, the player must achieve a very high or perfect score for their pursued character. A completely new scene, in addition to the good ending, will automatically be played as soon as the perfect ending is achieved.

VOICED SCENE AUDIO
The issue that caused the characters to speak at low volumes in voiced scenes has now been fixed.

GALLERY
We have fixed the bug that unintendedly displayed the CG titles in the Gallery. Locked CGs should appear in “???” and should only display the CG title as soon as the player encounters them in their playthrough.

Also, we have fixed the bug that disabled the player from unlocking the 5th Sex CG Scene for Yoichi and Hiro routes.

GAME ICON
We have now updated the game icon to its intended design. (some users might need to rebuild their icon cache if their game icon remains the same)

VISUAL BUGS
The following visual bugs and errors have been fixed:
Animation on Yoichi’s 5th Sex Scene : Keitaro’s duplicated arm has been fixed.
Animation on Hunter’s 1st Sex Scene : Hunter’s overlapped body part has been fixed.
A few of the reported character sprite bugs.
We encourage players who find similar visual bugs (such as misplaced facial expressions, wrong character poses, overlapping sprite positions, etc.) to take a screenshot showing the ‘in-game day’ as well as what ‘character route’ you are on, and send it to our email at: [email protected]

FILE SIZE
We’re glad to announce that we have managed to update all animation files, replacing the file format from ‘.tga’ to ‘.webm’. This conversion has not only allowed us to significantly reduce the file size of the entire game, but it has also allowed the animations to load faster and play smoother!
Along with other conversions, we have managed to compress the game from 11 GB to 3.3 GB!

UPDATE BUTTON
As soon as you update the game with this v1.1 patch, the ‘Update Button’ should now be available in the Main Menu! You can find it in the bottom left corner of your screen.
As there are currently no updates available for the game, please DO NOT CLICK THE UPDATE BUTTON for now, as it could crash your game while searching. We will release detailed instructions when this update tool is ready to be used!
This in-built feature was ‘hidden’ in the v1.0 version to cause less bugs, but we realized we should display this from now on so that future updates don’t need to have the entire game be re-downloaded. Future updates will be implemented through this button!

Plans for You [Completed]