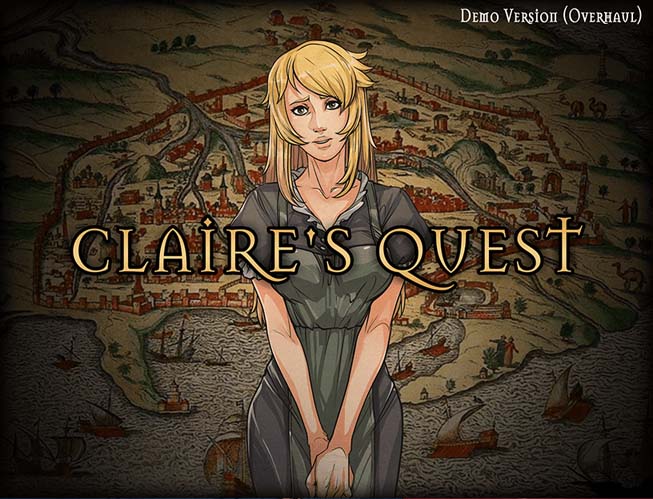 We wanted to toy with a stereotypical fantasy RPG setting – but instead of the player controlling a hero, or an adventurer, or anyone with any kind of outright power to change the world… we instead put the player in the shoes of the titular Claire – a naive, desperate refugee fleeing a terrible war that has taken everything she has ever known from her. Claire is thrust into a world without innocence, where the very worst of humanity and all its societal evils are on full display. She seems doomed to meet with a dark fate – but you can fight to prove otherwise… or, you can force her to succumb to her base desires. In Claire’s Quest, we really wanted to convey to the player that their choices really do matter. Every decision you make will have consequences – and not just small consequences, either. Your every decision could drastically alters the way your adventure plays out. That beggar you helped way back then on a whim… becomes the difference between success or failure, freedom or enslavement, and even life… or death. Every single playthrough could turn out completely differently. So how will Claire fare in this dystopian world she finds herself in?
With your choices, you’ll decide.

• Fixed plugin/Javascript issues with action button (“P”) not working and default to previous action button (“A”) instead. In general, minimap, stealth system, and controls, should all have been properly integrated now.

• Fixed the error with fail conditions activating for “Far From Home” quest in Rivermont even if you completed the quest correctly.

• Fixed consistency issues with meeting Charlotte in Valos from Rivermont instead of Hookton; she should now properly acknowledge that you came from Rivermont together.

v0.23.4
• Progression in Rivermont is now done! You should be able to progress the entire Rivermont storyline and end up in Valos after completion. Took awhile to untangle and find various story clashes (due to characters and stories appearing at the same place from different timelines) but should work now! However if you find any continuity errors do let me know. No penalty is in place for late-rescuing mother (yet) but the rest of the Rivermont section is ready!

• New scene: Marie x Pigboss. This only occurs if you infiltrate Castle Rainier too long (day 3 and onward in Rivermont), which will remove the ability to rescue Marie and leave her at the mercy of the pigboss instead. This scene is also viewable in the Gallery after completing any Prologue section!

• Big overhaul to the stealth system; enemy’s detection AI should now function properly, and they will be able to pick you up correctly if you are in their line of sight as well as their peripheral vision. So no more silly stealthy Claire walking right beside a Swogg who somehow can’t see her.

• Fixed a bug where Stella is not unlocked in the Gallery if you unlock the Prologue section.

• Fixed Camping Kit item not being consumed after use

• Fixed continuity writing with the pigman ending for Rivermont (colour palette swap on the pigmen was not a mistake, just mistaken writing)

v0.23.3
• Added in progression for Rivermont; you can now trigger and complete all the sidequests and main quests up until rescuing your mother and taking her back to Rivermont, for the “Early Rescue” segment. This will eventually be limited to a rescue by Day 2 in Rivermont. However, at the moment the timed day system is not active while we continue testing and development in the area. Note that Rivermont playthroughs still cannot be completed, and also that you need to start a new game to make it work properly so keep a save slot just for repeating Rivermont (alternatively if you just want to see Rivermont scenes use Gallery + Menagerie).

• Added in Route A for Rivermont.

• Added in Stella’s scene, which occurs after the bridge quest is done. Has High Seduction (>3) and low Seduction versions if you choose to take things further.

• The Pigman scene in Rivermont is now unique and different to the one in Fallwater. Both Pigman scenes have two parts; the initial attack part, which is the same, and then the ‘captive’ part, which are different between the two – Added in the unique captive part for Rivermont, which is a new scene!

• Rewrote the ‘old’ Pigman scene for Fallwater and corrected the sequential artwork order.

v0.23.2
• Hotfixed the progression-breaking bug with the Prioress at the very beginning of Rivermont!

• Fixed the pigmen not responding/chasing in the opening stealth intro.

• Added in Castle Rainier! You can now rescue mummy via Route B and see the “Early Rescue” results.

v0.23.1
• We are now the introduction of, and beginning beta-testing for, the Rivermont section of the updated Prologue! This area is still heavily under development, but players can now enter Rivermont (via the opening part of the game; you can skip right to this by starting a new game) and experience the atmosphere as well as take part in several new scenes! Would love to hear feedback on the area and the characters and if we should go darker/tone down a bit! As usual, once we clear each area of bugs we will push forward to the next one in rapid order. The current incarnation of Rivermont cannot be completed and players can simply play around with the opening part of it + experiment with Route B and the Curious Pigman/Washtubbers route to getting into the castle grounds.

• Updated save/load system that now not only shows you playtime + saved location, but also the current attribute distribution of that save (ie. How much Defiance, how much Intrigue, so on so forth).

• The opening section of the game now has an introductory stealth stage! (No gameover, will automatically teleport Claire out even if it fails).

• Fixed the WASD key introduction killing the “It’s Goblins” quest progression by changing the “A” action key to a “P” key.

• Various story angles now edited – Bertrand’s dialogue in Valos changed heavily, and Claire gets a lot more added depth and personality to her past as she moves around in the Prologue area.

• The Pigboss encounter in Fallwater has had its map changed and the encounter changed to a stray Swogg. Fallwater itself has also been changed, with the addition of stealth zones.

• Swoggs added to the game! Scenes available for unlock in Menagerie. They are gameover encounters in one part of Fallwater, as well as the Occupied Rivermont area (exterior/outside).

• Little non-NSFW introduction CG scene with Stella and Claire when she chooses to go into Rivermont. Same CG applied when meeting Bertrand in Valos without going to Rivermont at the beginning.

• The Lecherous Townsperson, the brother of the Lecherous Refugee, added to the game! Along with his ass groping scene in Rivermont.

v0.22.5
• The opening quest of the Showgirls Questline, “The Tenants”, can now be completed after meeting Farrow and Travers.
• “The Good Doctor” minor quest can now be fully completed, along with the option to turn in Genevieve to the Revilliers instead of siding with her. This will additionally lead onto the “The Breeding Game” quest, a placeholder for future content revolving around Genevieve creating more chimeras; this is contingent upon Claire owning the Chemont Breeding Ranch however. Comes with the new Genevieve x Jillian x Chimera scene.
• Added a new scene/quest, the Manticore Tail Experiment, in Aiyana’s Lab as part of the Alchemist Questline.
• Upon popular request, added the WASD movement system which works to move the character alongside arrow keys and mouse clicks.
• Added a Stash system to complement the new weighted inventory system! Stashes can be found at any inn, as well as at any home or building that Claire owns. They have global effect, and allow players to drop off items so they don’t walk around over-encumbered or get forced to throw away items to reduce weight.
• Fixed a bug with the Sisters of Fertility “Harvest Festival” quest, where the quest-starter would remain behind at the Bullpen in Chemont, allowing the event to re-fire pointlessly.
• FINALLY fixed the bug porting Claire into the sea out of the Salty Slattern, FOR GOOD this time, fingers crossed.
• Fixed Jillian and Albe’s sprites remaining in the Valos Garrison building even if you side with Genevieve in “The Good Doctor”.
• Minor typos and text consistency issues fixed, too many minor ones to list individually.

v0.22.4
• The start of the Showgirls Questline can be begun in Valos City Slums by buying it from the Landlord. [COMPLETE/GOLD EDITION ONLY].
• New quest, “The Good Doctor”, can be started by accessing the new building, the Clinic, in Valos Inner City. Comes with the accompanying Claire x Genevieve x Chimera scene. Route to side with the Revilliers not yet included.
• The pregnancy system has been added in, along with the first “basic Valos pregnancy” event. If you turn on pregnancy as an option in menu, this can be triggered from most human encounters where they cum inside of Claire vaginally (1 in 5 chance). Alternatively you can force it to happen just by using the new Status Adder NPC in the Gallery.
• Supply merchant in Rathpike now sells anti-monster gear but at a premium markup compared to mercenary suppliers.
• Fixed the new inventory weight system glitching beyond 5-count.
• Added in the ability to dump non-key items from the inventory, from the menu.
• Fixed the Wayside Inn glitching and not letting you leave after you finish the Harvest Festival as part of the Sisters of Fertility questline.
• During the rainstorm event and all future bad weather events, taking more than 50 steps to find shelter will result in Claire getting the Sick status, which can only be purged via Medicine or by finding a clinic.
• Stopped the ability to “run” from weather events after they have triggered.
• Fixed the bug in the Thieves Questline when returning from the quest ported you into the sea rather than outside the Salty Slattern


We disable comments to the public due to high volume of traffic and spam comments, Commenting is only available for VIP members.
4.6 5 votes
Total Game Rating
Subscribe
Please login to comment
32 Comments
Newest
Oldest Most Voted
Inline Feedbacks
View all comments

I must really say, thank you oh great and mighty admins. This game was something I truly wished to play and I finally found it here. My utmost respect for whomever adds games to this website.

Doesn’t change that it the link still don’t work

Mega link does not work

Everyone have some walkthrough for this game? How i can go inside the club?

Disable ur chrome, and work it. Thanks min