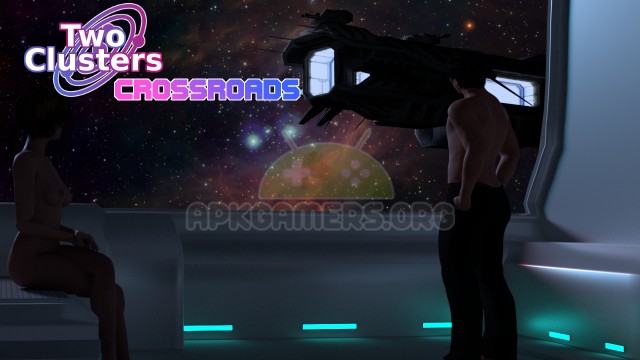 Year is 9614, Jaxx is a member of a pirate gang called “Wounded cats”. His life has been okay. Earning is fair. He has a girlfriend who’s been in a relationship with him for over a decade. There is no pressure to tie the knot. Life is merry and well – until a new female member arrives at Wounded cats’ station amid political instability within Solar system.

She begins to shake his life and Jaxx will have decisions to make. Thus, “crossroads”.​

version 0.2.1
1. Some major bugs fixed and further balancing of opponents.
2. Story progressed far enough for Jaxx to have his first thoughts on his relationship. This adds an event when Jaxx spends his time alone in his room once his relationship with either girl is past 110 points.
3. A new girl, Evie, is finally added. With her in the game, Sonia’s quest can now progress.

version 0.2.2
1. Undocking bug fix when you purchase Robin II
2. Updated space chart for more clarity as well as adding a popup window for a simple instruction (when starting anew).
3. Shooting range bug in early game fixed. (I think.)
4. BJ station cafeteria is finally open.
5. Main story progresses. The first story decision is pretty near.
6. Added larger renders of spaceships with their profile in the gallery room.
7. Walkthrough has been reworked to provide more info on the game’s basic game mechanics.