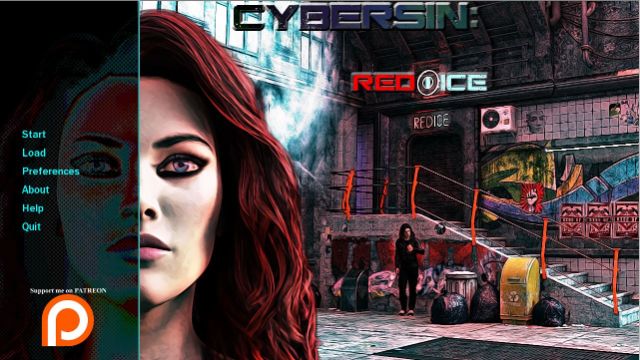 Set in a Dystopian Sci-Fi future, CyberSin : Red Ice follows the story of Elsa Morganth, daughter of the chairman of one of the largest megacorporations in control of the world.
After a mysterious accident, Elsa finds herself indicted for a crime she didn’t commit.
Thrown under the slimy belly of society, with scarce resources, she will have to find a way out of it, while at the same time trying to find the real culprit so as to regain her old life.​

v0.05a
* Bugfixes *
– Countless denoised images (Improved Quality).
– Rework of the Ambrosia aesthetics.
– Added and fixed some variables.
– Fixed some bugs in Tony’s CODEX page.
– Now the “Secluded Alley” near Ambrosia is explorable only after meeting Tony at the clinic.
– Fix on Isaiah’s store, which was giving a bug when purchasing fuel under some conditions.
– Rework of some scenes’ pictures.
– Fixed the code for Isaiah’s first event, more functional and polished.
– The randomized work events have now proper sound effects when earning Credits.
– Patch03 with some variable fixes.
– Removed “Timed Choices” from the game.
– Fixed a bug, invalid syntax, that was present in Izy’s dialog.
– Fixed typos in previous dialogues.
– Dominance points for Izy were added in some of the choices.
– Now choosing to keep the security cameras in the shower (Izy’s dialogue options) will make Red/Elsa interested in Izy (prone to future romance options).
* New Content *
– Added “To-Do List” in the Journal. Every time you feel lost about what to do, you can check it out.
– Added “Street Tony” encounter in the secluded alley near The Ambrosia.
– Street Tony dialogue tree with many different variables.
– A new erotic scene with Street Tony (in case you decide to seduce him for the mask).
– First BAD ENDING that will trigger if you fail to recharge the clinic’s generators with fuel.
– General improvements for the CODEX (you have now a button to hide Characters from the Prologue and Clinic companions, such as Izy and Ice, will also have a Status to show their relationship).
– 4 new CODEX pages (3 New characters and 1 Faction).
– Faith Event – New recruitable companion (if you want to save her). To activate this event you need to reach at least 5 Reputation and reach at least day 16.
– Three new story scenes (all tied to the Faith Event).
– Two new songs in the soundtrack.
– Two new banter events will happen after recruiting Faith.
– Now certain dialogue pink choices will have the sign (*ROMANCE*). Picking these choices will lead you on a path to begin a relationship with a specific character.
– New dialogue options for Ice and Izy.
– New dialogue tree for Faith.
– New option to start a romance with Izy (in his dialogue, with at least 125 points of relationship if you aren’t already interested in him) and Faith (during one of her new events). It’s just the first stages, but more to come in the future.
– Updated CODEX pages with new info that will be unlocked via the new dialogues.
– You can now play until day 23.

v0.04a
*Bugfixes*
– Fixed a bug in the shower scene.
– Fixed Tony’s CODEX
– Fixed gallery scenes that were missing sound effects.
– Added a missing hidden variable to the shower scene.
– Made some adjustments to the story prologue (thanks for the feedback).
– Fixed some typos.
– Ambrosia pass cost changed from 5000 to 2500 credits.
– Fixed a bug that prevented getting the right amount of credits when Izy was selling his “cameras”. If already sold, you will be granted the missing credits (via the patch system – Patch02).
– If you have decided to use Izy cameras for security, they will no longer be available for sale in Isaiah’s store.
– Fixed some mismatched sprites.
– Added more chances to earn Reputation points. If you have already passed those moments, you will gain Reputation automatically (via the patch system – Patch02).
– Fixed a bug in Isaiah’s dialogue that allowed the purchase of various things without having the necessary Credits.
– Fixed a bug during Street Tony’s event in the clinic.
*New Content*
– Added a code that will daily increase the Lust stat unless you ‘released’ it the previous day.
– Added new options, after being requested by many, to just watch or skip the entire Fergus/Investigation side-story.
– Updated security cameras dialog, with one unlockable mini-scene (with conditions).
– Added intros to three new characters, plus one faction, and their CODEX pages.
– Fuel/Generators system. You’ll need to acquire fuel every week to recharge the generators. You can do it every Sunday afternoon at the clinic. The system is still in the works but it will be fully implemented in the next version of the game.
– The continuation of Izy’s side story (if he spies Elsa in the shower, go and confront him in his room.)
– New bed scene where you can increase LUST or release it (faster than the shower scene).
– Dialogue tree with Isaiah
– New scene with Isaiah (convince him to give Elsa a discount…)
– You can now access Isaiah’s merchandise while he visits your clinic every Sunday afternoon (for now limited to Fuel and Security Cameras).
– You can now play until day 16
– Added options if you fail to pay Isaiah the first time you meet with him and even a second time (if you fail to pay him your debt a third time at that point he will leave without selling you anything).
– New dialog with Isaiah – updated CODEX page.
– The internal and external turrets are now available from Isaiah (if you make the purchase you will be able to see them in some of the locations).
– You can now choose whether or not to use your discounts when buying something from Isaiah.
– Reputation increases the Credits that you’re able to earn every time you spend time working in the clinic (for now the two tiers are 0 to 4 and 5 to 9 Reputation).
– You can now complete the quests “Climb the Social Ladder” and “The Price of Fame” with the right amount of Reputation and Security.
– Ambrosia update – Meet Liz. An intimate scene with her, plus a new dialogue tree for Liz and Candice (over 3000 lines of code).
– Two new songs added to the Soundtrack
– Three new scenes in Gallery
– Added more Genre tags (check the updated list)

v0.03a
*Bugfixes*
– Added some alerts of losing Karma which was not displayed correctly.
– Fixed some typos.
– Fixed a text bug in Wilfrid CODEX page.
– Icons of the game finally fixed for both Pc/Linux and Mac versions.
– Fixed a bug in Izy dialog

*New Content*
– Sound effects added throughout the entire game.
– Added a work event with a new character (to activate it work in the afternoon after day 3).

v0.03
*Bugfixes*
– Fixed a bug that allowed the rollback while using Journal or Codex. Removed the dissolve effect on both.

*New Content*
– SUGGESTION – Make a save at the beginning of Chapter I, because more content will be added in the future.
– Added New Logo Animation as Splash Screen.
– Added a “Journal” in the Game UI.
– Added a Day/Afternoon/Night mechanic to the game with Day counter UI access from the STATS button.
– Added new factions in the CODEX.
– Added new characters in the CODEX.
– One new unlockable scene in “Gallery”.
– Shower scene which can increase or decrease LUST.
– New Relationship system, which features 5 stages each for both Friendship and Attraction creating 25 combinations of moods (yeah, that’s very complex).
– New music added in “Soundtrack”.
– Chapter I intro with 3 days of the initial content (which will be expanded in the next versions).
– Added locations: Red Ice Clinic, Street outside the clinic.
– Added “Work System” which will allow earning Credits by working in the clinic, based on the STAT Reputation.
– Added dialog system for Izy and Ice.

*New Content*
– Introduction of a side story with a different POV

v0.02
*Bugfixes*
– Minor fixes of bugs due to double sprites.

v0.01a
*Bugfixes*
– Fixed an issue that caused some players to experience problems with music volume.
– Fixed an issue where Jake was not fired even though the player had decided to do so.
– Fixed some of the variables that were not working properly.
– Fixed some minor bugs with double sprites.
– Fixed the title of the game to “Red Ice” so that it’s not misread.
*New Content*
– Added a ‘Scenes Gallery’ in the Main Menu. You’ll need to unlock the scenes while playing the game.
I’d suggest a clean save because variables were added to the code.
– Implemented a Patch system, so that players will not need to start a new game if something new is added to previous parts of the game/story.
– Added ‘Soundtrack” room in the Main Menu.
– Brief but significant continuation of the main story.