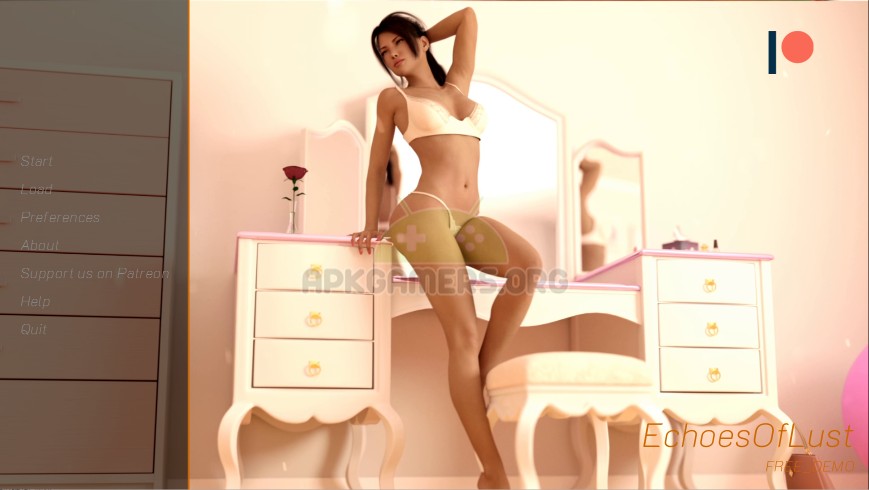 You take control of a guy living with three beautiful women. You live a pretty ordinary life… You go to school, do your chores, study for college, play games, watch TV. And then, the same day starts repeating and repeating, and… repeating. So suddenly your life isn’t so ordinary anymore…​

Episode 5
In Episode 5, we focused on ANIMATIONS. Episode 5 has 23 ANIMATIONS which is by far the most we have ever put in in a single update. Usually the animations that we made had around 30 frames (or one second) now the animations are longer (up to 300 frames) and far more advance!
Updated stories: Elizabeth story (HOT!), Megan story (HOT!), Teacher story(HOT-ish) and 1 new Hidden Event.
300 NEW RENDERS
23 NEW ANIMATIONS

Episode 7
This is the biggest, longest and hottest update we have ever made!
Echoes of Lust Episode 1-7 is now live for all 20$ and above Patrons!
Updated stories: Elizabeth story (HOT!), Sophie story(HOT!)
And 1 new EXTRA LONG Hidden Event (350 renders) including Jessica, Megan, Zoe, Ellie and Elizabeth.

An update to Ellie’s story will be released in a Hotfix on Tuesday due to a bug in rendering. Sorry about that. (Don’t worry, there is still plenty of Ellie in this version)

We disable comments to the public due to high volume of traffic and spam comments, Commenting is only available for VIP members.
4.5 2 votes
Total Game Rating
Subscribe
Please login to comment
5 Comments
Newest
Oldest Most Voted
Inline Feedbacks
View all comments

Hey…why did you remove the codes for bonus content and other stuff ?
When can we get them again ?

The game is kinda like milfy city just not much as good. And the loophole story kinda got annoying near the end but still it’s a good game overall with amazing rendering and animation

Nah actually speaking this game would be trash If not for it’s quality as the story sucks ass. The protagonist is the dumbest creature I’ve ever seen and I like stories that have some progression, consequences and character development even if it’s little but here it’s none.

fix now, please rate the game according to the gameplay

Everyday With a Foxgirl Plus: Perfect Edition [Final]

Not Everyone Lives v2.0