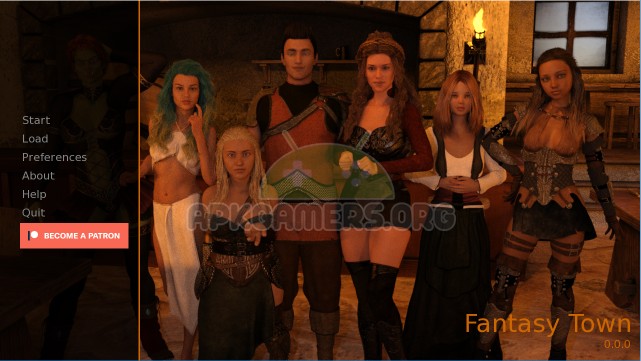 Fantasy Town APK Android Port – The game Fantasy Town is an RPG/visual novel hybrid. You play the protagonist who finds out he has supernatural abilities that get unlocked by having sex with women. He is unclear where these powers will lead him. On this journey, he meets with many interesting and varied characters, elf, orc, dwarf, barbarian, priestess and many surprises. What I am hoping to make this game different is the variety of types of characters. Not having characters with very similar personality and body types.

Rebalancing:
Made things a little less “Random”
Start off with 50sp
created some new “Drops”
changed some probabilities of encounters in forest.
Comfrey leaves now sellable

0.8.0b
Khurza the librarian story line completed.
many bug fixes….

Rebalancing
Made it easier to find books in library

0.19.0
Added Sphinx in Dark Forest encounter and sex scene.
Durila sex scene updated – added a new image and improved dialog.
Improved stats costs – now is more consistent and the costs to improve it exponential grow instead of linear. Increasing them the first time is cheaper but increasing them later gets a lot more expensive. This will will make earlier game easier and end game harder.
Added a “Dark forest” location where the monster are in general much harder. Taking some encounters currently in the forest and moving them here. Will no longer have the “night” difficulty but instead added this to the new Dark Forest. I think this will work better.
Many minor bug fixes and dialog fixes.
Made small updates to past story line for main story arc updates.

v0.21.0b
Major changes:
– Added new minor character Captain Shazari in tavern (new sex scene)
– Fixed spells learned by Lilith – There was a bug where you could only learn “Insight” this should now be fixed and remove the multiple insight spells you had and allow you to learn the other spells.

Illyana relationship levels changed so if you were “Friend” on a previous save it should automatically make it “Acquaintance” now for her.

Teaser scene show up randomly when you talk to character if you are a friend or better to them.

0.29.0b
Shala the succubus sex scene
Fixed up some of her previous dialog

Changes
Added locations to relationship screen
added inventory count to selling items at market.
Made it so you can redo the Succubus prison without the combat 2nd time through.