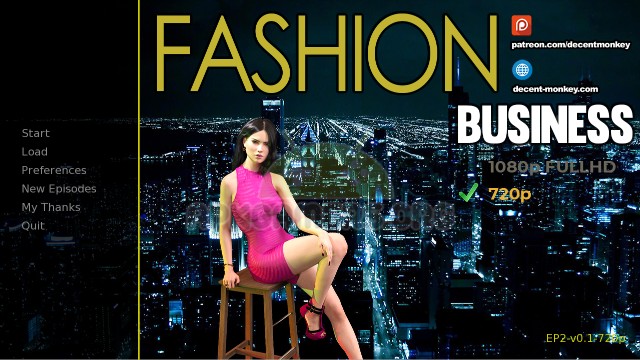 Fashion Business APK Android Port – This Game is about Monica. Monica is a “Rich B*tch”. Monica is the Boss. Most of all Monica adores authority and to control people and she manages with everything not in a sensitive or delicate way. If Monica was your Boss, you would be likely fired. For certain, everybody has ever met their own Monica! Take part in her luxurious life. Monica is sure that her existence is going to be always the same! What do you think? If suddenly you appear as witness of her falling down lower and lower in the social standing?​

Episode 2 – 0.2
This is one of the most significant updates ever. It consists of about 1400 new renders and several animation clips!
The new version contains great progress in several lines of the plot.
Bardie storyline
Bardie wanted to find an approach to Monica to see her panties, and he could succeed, even more than
Betty storyline
Betty, perhaps, will trust Monica more and offer to visit the fitness.
Monica can’t do training yet, but she can watch on girls how they do it.
Several replayable scenes with several variations are awaiting you there.
Besides, you may discover about the weaknesses of strict Betty. But it depends on your choice.
Dick and Victoria storyline
Monica will advance in the relationship with Victoria. They will become ‘friends’
Office storyline
If Monica suddenly needs money, she can continue to earn it from Biff
She understands what these photo shoots can lead to in the end, so is she ready for this?
Falling path
Delivering flyers is not the easiest way to make money. Maybe Monica will find a way easier? But is she ready for this? Perhaps it’s okay to make a small exception, it’s not for long, right?
Also, you can learn some news about the secretary of Monica

Episode 2 – 0.3
Big “office storyline” update. Different outfits. Hot scenes, etc.
The advance of relationships of Betty, Fred, and Monica. Hot scenes too.
New location. The pub “Shiny Hole”. Some story and start working.
Added dancing at the pole in the blind alley.
Ability to buy food at the gas station.
Skipping day until evening by pressing the button on the top of the screen (working only in the street locations)
Change clothing before leaving the house by the map.

Episode 2 – 0.5
This update consists of 1200 new arts and 62 new animation clips and is very hot!
It focused on scenes with Monica and starts just after the last Steve’s visit.
In the update Monica wiill visit Steve’s office, but she needs a proper clothes.
If Monica was kind to people, she can take a discount and get the dress from the clothing store for a low price.
However, she may try to steal it…
After getting the dress Monica will go to Steve…
So, as always, Monica’s faith is in your hands.
Enjoy the game!

Episode 2 – 0.6
This update consists of 1950 new images, 20 animation clips, and about 2000 new dialogues.
As always, I try to achieve the maximum quality of gfx, animations, and plot.

– New actions with Bardie.
– With the help of Bardie Monica will eat in the kitchen
– New falling path event: naked boobs. A lot of variations for different citizens: 27 in total.
– Betty’s visit to Steve’s office during “signing” Steve’s contract by Monica.
– First contract with Jane.
– New work in the office. Monica will become a Boss again.
– Two new hot photoshoots.
– Melanie is back.
– Ability to eat in the Shiny Hole pub.
– Ability to eat in the Restaurant located in the Le Grand hotel.
– Added a scroll bar to the quest log.

Episode 2 v0.8
The release contains more than 1700 new images, 42 new hot animations, and about 2000 new dialogs. I put a lot of effort into creating close-up animations for this update. Now their quality has become even higher, and the animations looking as realistic as possible!

Fixes and improvements:
A bug that caused crashing during the scene with Melanie.
Achievement update bug.
Problems with story quests if you spend the night in the slum apartment.
The problem of breaking quests when the right mouse button is pressed during the dialogue. A lot of mystical bugs are related to this.
The ability to reset Shiny Hole quests after loading v12 (you need to enter the pub)
The ability to send a crash log with one press of a button.
The translation engine was changed. Lower memory consumption. Faster game starting.
Show the game menu by long tap on Android devices.


We disable comments to the public due to high volume of traffic and spam comments, Commenting is only available for VIP members.
1 1 vote
Total Game Rating
Subscribe
Please login to comment
1 Comment
Newest
Oldest Most Voted
Inline Feedbacks
View all comments

Episode 1 ended with Monica being photographed in a wedding dress after meeting Dick. Not sure if they got married or pretended to be married. Episode 2 asks for so many things which never happened in Episode 1. Developer gave 2 different routes of the story, 1 is decent and other is bitch. But expects everyone to play the bitch route. Lost interest in episode 2 because of so many questions and new things that confused me and took way off the actual story.