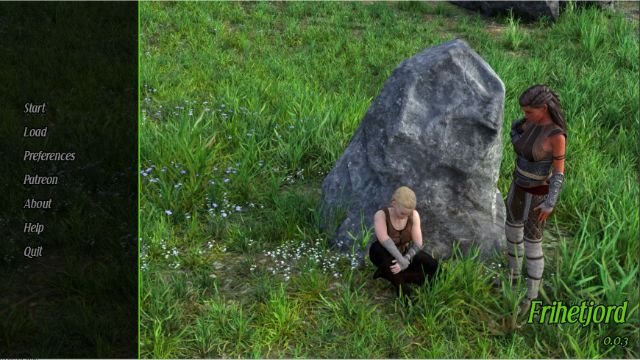 Go through intrigue, battle and sex to build a settlement that has become your new home.​

v0.1.41
Fixed a couple of bugs and added a preview with warning.

v0.1.4
-Added a new character – the girl Eir. Upon completion of her quest, she will become part of the settlement. To open a character, you need to go to the shopping area, the character may not appear the first time. (If you are using old saves, then activate the script in the cheats menu in the main character’s house)
-Added the ability to work in the gloryhole (Opened during the quest Eir)
-Continuation of the quest with tools for Sylfest
-Other minor changes
Sex scenes: gloryhole job scenes

v0.1.2
-Added a small continuation of the main storyline
-Added a story quest Dzhorann
-Added the ability to sell meat to Looha in the tavern
-Added an event with sacred stones in the forest
-Added the ability to buy a more powerful ax from Anek (If you are using the old save, then activate the script in the cheat menu)
-Added the ability to build a hunter’s hut and a well
-Added in advance the ability to improve the quarry (Will be available after improving the lumberjack’s house)
-Slightly changed the system of teaching sex skills. Now, before continuing with your studies, you need to pay a small amount
-Added another tutorial from Annichen
-Amanda’s bandage price halved
-Added information on the number of remaining construction days in the construction acceleration menu
-Other minor changes
Sex scenes:
-Anal sex scene with Annichen
-Dzhorann horsecock sucking scene

v0.1.1
-Added the ability to build a quarry
-Fixed a few minor bugs
-Other minor changes
-Now you can surrender to the savage without a fight or escape from her
-It is now possible to buy skins from Ulrik in Oksa

v0.0.9
-Added continuation of the plot
-Added the ability to sleep in the tavern
-You can now build a lumberjack house
-Added mechanics for level up sex skills
-Sex Scenes: Two oral sex scenes with Margot

v0.0.8
-Added continuation of the plot
-Added some sounds
-Fixed several minor bugs
-Added building mechanics (so far only one house can be built)
-Sex scenes: futa-on-male and male-on-futa scenes (event in the forest)

v0.0.7
-Added a chest to the house
-Added the ability to visit the inn at night
-Added the ability to drink beer in the tavern (while only rewinding time, later maybe will be added random events)
-Added work in the tavern
-Mini-game of chopping wood in the forest redesigned
-Now leveling up increases maximum health by 5
-Fixed several interface display errors
-Added continuation of the plot
Sex Scenes: vaginal sex with Vivi

v0.0.6
-Frame rate is now limited to 60
-Cursor changed
-Added the ability to change the cursor in the settings
-Added a shield to Anek’s shop
-Added shield mechanics: if the main character has a shield, then he receives less damage (values will change during the development process)
-Added barracks to Krushitsa
-Added the ability to push-up and increase experience in the barracks
-Added continuation of the storyline
-Added one new event in the forest
Sex scenes:
-Futa-on-male scene with Inga

v0.0.5
-Added a book with nicknames of patrons from 3$ tiers and higher
-Fixed the name of the game and the house of main character and all the variables associated with it
-Now the minigame of chopping wood responds to clicking, not releasing the mouse button
-Added a healer to Krushitsa
-Added the ability to run away from the wolf by throwing meat

A Kiss For The Petals: The New Generation