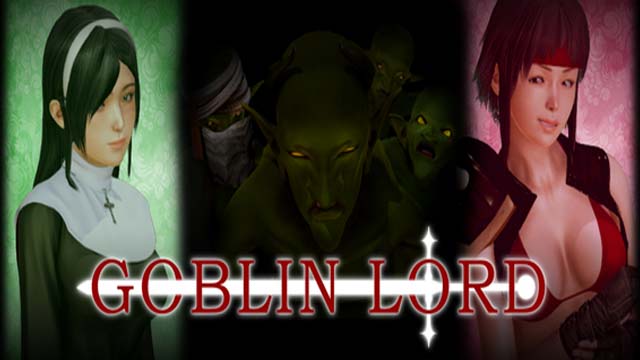 Set in an world of magic and chivalry, it’s a story about you (a goblin) taken from your nest and being used in an experiment by the humans. As fate would have it, you escape. Goblins being spiteful in nature, you plan out your revenge in those who took part in your torture. Using your newfound abilities to rise in power to become a Goblin Lord!
(or if you’re just into girls getting gobble’d, then that’s just fine too!)​

v0.03
> Added day-night cycle
> Added inventory system
> Holy Palace of Malphina added
> Dungeon quarters added
> Story is continued
> H-scenes for Ryuna at the ruined keep is moved after finishing your meeting with Elena
>Added notes and lore at the desk in the dungeon quarters
>Some minor changes in dialogue
>Made the texts a little smaller so dialogue can fit better in the text box

Changelog (ver 0.4.1):
– Fixed the error with the no gold being added to inventory after performing public service of Ryuna. (Thanks to Dakuwa Shizen)
– Added new menu screen
Majority of the time spent in making this update was through the making story. I had to scrap and redo a lot of the dialogue and scenes. To make it easier, I’ll be posting some polls in the future to make sure the stuff/fetishes/lewds you guys want is in the game.

Changelog (ver 0.4.2)
-Fixed a bug where the player will wake up in the dungeon quarters after sleeping in the Ruined Keep.
-Fixed a bug where players can immediately enter Despot before completing the intro to the love seal.
-“Pass the time” option in the Ruined Keep is now only made available AFTER meeting Elena in the Holy Palace for the first time.
-Fixed a bug where players can perform the love seal ceremony at Ryuna’s sex scene in the dungeon even without buying the Love seal tome first
-Fixed missing nametags on certain dialogues

v0.5 Fixed
– Fixed the bug where Naru is in Ruined Keep dungeon even before you fight her.
– Fixed Naru’s breeding den scene
– Fixed Ryuna skipping to birthing scene when she is sent to the breeding den for a second time

v0.6.1
– Added new intro event for Naru when you take her for Public Service
– Added new sprites for Naru for showing her as a love slave
– Added and fixed Sophie’s story (for real this time)
– Fixed trigger for Amy’s event and resized her scenes to correct resolution
– Removed the “Add 200 gold” from the donation menu (no more printing money!)
– Added new dialogue to Sister Kairi where she explains how to trigger Elena’s event
– Made the dialogue box more transparent to see the scenes even better
– Added new lewd sound effects
– And some minor tweaks and fixes here and there

– Fort Silvershield location added (along with appropriate background, dialogues, etc)
– New character added
– Renewed Eri’s sprites
– New 2 side story events for Elena (44 scenes in total)
– New 1 lewd events for Naru with the goblins (7 scenes in total)
– Added 1 new music
– Added 3 more sound effects
– Added objective dialogue makeup to Goblin Shaman
– Made a universal port for android devices
– Minor tweaking to menu screens, scripts, etc.
v0.8
– Dungeons in Fort Silvershield added (with respective characters, dialogues, and background)
– New characters added (Gian, Choncey, and Pit)
– Renewed Elena’s sprites (5 renewed + 5 more added)
– New 1 lewd events for Elena (36 scenes in total)
– New 1 lewd events for Amy (19 scenes in total)
– Added 1 new sound effect
– Fixed some typos
– Minor tweaking to menu screens, scripts, etc.
v0.8.1
– Added a new intro sequence once you start a new game
– Added and tweaked various dialogue in the game to fit the new intro (particularly when talking about the Kingdom of Varentese)
v0.9
– Continuation of donation events for Elena. 1 new lewd event (26 scenes)
– Continuation of lewd event for Amy (16 scenes)
– Progressed the main story. Added various paths and dialogue in the main story in proceeding to the climax of Eri’s story.
– Fixed Kairi going back to her normal dialogue tree when you donate to her when she is angry at you.
– Fixed transaction dialogue with Vigo when buying construction supplies from him.
– Added option to buy 3 of each construction supply into one transaction when trading with Vigo (with discount!)
– Removed the messages in many of Elena’s lewd events where it says it is the end of the event chain.
– Added notifications on the end certain lewd event chains to notify the players if there are no more events.
– Added dialogue for Shaman to tell you how many goblins you have in the ruined keep.
– Added a fastforward option at the impregnation events for both Ryuna and Naru to avoid the looping bug.
– Fixed continuity error at the Adventurer guild when listening in on the adventurers and then suddenly ending up at the general store.
– Time now passes in one of Ryuna’s sex scene with the Goblin Lord in the dungeons.
– Added appropriate names to some places (like the tavern at Despot)
– Added some new entries at the library about the Holy Order.

Fix link pls, both of them are dead