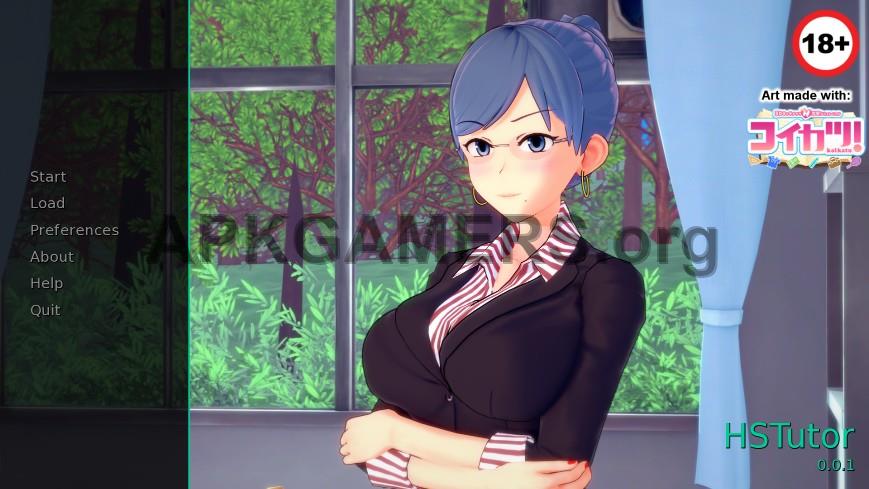 Download HS Tutor APK Android Full Game version 0.10.6 For Free – HS Tutor Android is an Adult Game for Android Download APK For Free. HS Tutor is a VisualNovel Adult Game. Download now in our site with no payment and full free to download, Visit APKGAMERS.org for more Adult Android Games. HS Tutor APK Keep in mind it’s just a prototype. There is no adult content for now (except a nudity scene in the shower and a spicier in bed), just the introduction of the characters and a few things about the mechanics of the game. Note also that the current prototype will be basically the prologue of the full version, so it’s very linear. However, in the full game the player will have complete freedom to do whatever he wants during the morning / afternoon / evening of any day. It will look like Solvalley School in that point, where the player can explore the map freely without having to follow a pre-determined story. The city map only has 4 houses and the school (three of the houses can not be visited at the moment), in the next updates I am adding locations for the player to visit.

v0.4.0
– Three new teachers + their events + their sex scenes
– Zoe and Mila storyline: two new events + new repeatable scenes
– Option to change the name of the protagonist
– Option to name the relationship of the protagonist with Zoe and Mila
– All gameplay mechanics implemented (college exam, study with teachers, train station to see the ending scenes in future versions, etc)

v0.5.5
This update contains only 3 new scenes and is just a preview of the next to come. Update 0.6.0 will be ready in at least 2 weeks and at most 3 weeks!
Note 1: this preview will not have a android version
Note 2: part of the content of this update will be improved in the next version (text of the scene with Zoe + night scene of the kiss with Mila)

New scenes:
1. scene in Claire’s room 1
2. scene in Claire’s room 2
3. scene at school with Claire 1
4. sex at school with Claire
5. sleeping at Claire’s house
– Claire variation
– Helena variation
– repeatable variation (with new animations, text and scenes)
6. Sex in Mila’s Room
7. Sex in Zoe’s Room
– variation of scene from previous version with new texts and animations
8. Blowjob Battle
9. Bath with Zoe and MilaOther modifications:
– improvements to the text of some Claire and Zoe events.
– sex gallery is separated by characters
– possibility to change the protagonist’s name and girls’ roles in replaysNotes:
– I’ll wait a few days before making the Android version, mainly to fix possible bugs that players will encounter.
– the sex gallery is incomplete, but I’ll patch it in the next few days

v0.7.0
Scenes:
– Posing naked for Kelly
– Kelly’s mom in the park (with extended version with sex)
– Sleeping with Megan
– Sex with Megan (repeatable, with new text and positions)
– Strip Poker

Other changes:
– all ~8000 lines of Claire’s script were corrected by a native English speaker

How to beat the strip poker game:
This scene is a bit frustrating in the current version and will be improved in the future. To win more easily, you have two options:
1. Only bet when you have “three of a kind” or better and have patience…
2. Select “fold” on all rounds to lose on purpose. The next day, talk to Megan and try again (you will have the option to win the game automatically).

v0.7.1
Version 0.7.1 of HS Tutor only has a new scene, the celebration of Zoe and Mila if the protagonist is approved in college. This scene got a little bigger than the HS Tutor standard, since it has 155 images and 60 video files, so it would be comparable to about 3 normal scenes. The real reason why the update will only have this scene is because I spent most of the time taking care of the “technical” parts of the game, as I will explain below.

About the scene itself, I honestly don’t know if it got really good. I will probably have to improve it in the future, because I realized that some events are not flowing very well. Perhaps that can be explained by the fact that I wrote a good part of the scene while I was sick, but that doesn’t matter now. I prefer to make the update available now and make improvements in the future (in case anyone thinks it is necessary).

What am I going to do now?

In the coming weeks I will work with the sole intention of adding content to the game. I will make available the version 0.8.0 when I have advanced the story line of Charlotte (blonde girl with big breasts) and Kelly (nerd with glasses) to the point that it is possible to make love with each one of them. This will make all the main girls, with the exception of Amy (the protagonist’s rival), have their sex scenes in version 0.8.0.

About changes in version 0.7.1

Most of the time I worked on this version was to fix some old things and improve some aspects of the game.

I found some old small bugs and also fixed them (for example, a scene in the gym with Claire that could send the player to the park, or the fact that it was possible to pass the college exam infinitely in “casual” mode). Some things I added also generated some bugs that luckily I noticed before making the new build.

The biggest difference that I think players will notice is that Mila and Zoe’s roles now are cited much more in the text. I personally choose “mother” and “sister” when I play the game, and in my opinion this is enough to mitigate Patreon/Paypal/Mastercard censorship a little.

As I said in previous posts, I also applied the correction made by a player in basically all the texts of the game, but removing anything that could mischaracterize my style. I also made a replay gallery with all the sex scenes, added texts in several old scenes of Zoe and Mila so that they recognize the things that happen in the game (for example, Zoe says different things before and after you become her boyfriend), etc.

I know that some people are going to be disappointed because it took me a month to do just one scene (despite being relatively large) and just modify “technical” aspects.

But I was going to have to do that at some point. For comparison, when I worked only at Solvalley I had to take a break of about two months without adding content because I ported the entire game from RPG Maker to Renpy. I was very afraid not to add meaningful content in such a long time, but in the end the version of Renpy got so much better that it was worth it.

Well, as I said before, I’m going to start working on Kelly and Charlotte’s content tomorrow and try to create the scenes as quickly as possible.

Note:
I’m going to make a patch available soon adding some things I didn’t have time to put in this version, including a system of tips for all events and repeatable events with Maddy and Amy.

How to install the patch:
Unzip the patch as you wish and then drag the folder to the location where HS Tutor 0.10.0 is installed. Make sure that the old files have been overwritten by the new ones.

In addition to bugfixes and corrections in the text.

when the New version will came out?