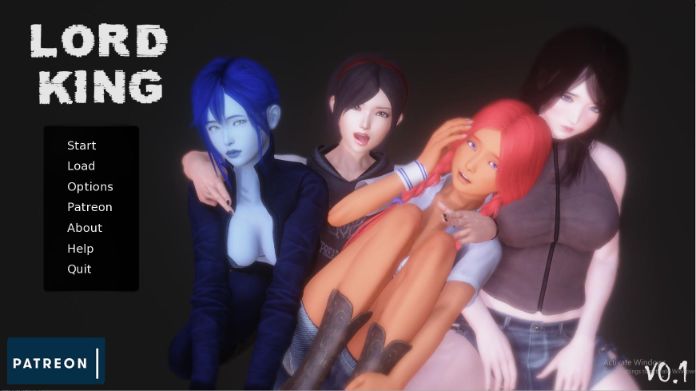 Lord King APK Android Port – this is a visual novel with elements of strategy. You are going to face everything that includes in life of the lord: controlling other people, obedience to the queen, intrigue and honesty, rebellion and wars, betrayal and loyalty… It’s only depends on you what kind of ruler you want to be.

The setting of the game is post apocalypse. Almost whole population wiped out and survivors are afraid of the “taint” – a disease, which kills or turns you into mutant. The main action of the game happens in one of intacted cities, surrounded by radioactive wastelands.

Your hero came here from wastelands to find his tribeswomen, which have been enslaved. As fate would have it, he becomes a head of one of cities districts – they call it lord. Now you have power to control people’s lives and not only use it to save your tribeswomen but also to become the king of this city

v0.12
Stability of the game is improved a lot. Fixed:

v0.34
This is a short update (I had less than 2 weeks to make it – more info, as usual, in the dev notes), included two stories:
– A new scene with Ully’s punishment + a repeatable scene with changed text + 2 animations;
– A scene with Lori. You need to decide, if you want to start a romantic relationship with her, or you want her to stay just a slave.
If you chose the first option, you’ll get a date with her + a repeatable version of this date + Lori’s quests (1 or 2 depends on your choices – they can’t be completed atm) + 5 animations.
If you want her to be just a concubine, you’ll get a new harem scene with her w/o the quests (cuz MC doesn’t give a shit about Lori’s problems in this case) + 3 animations.
Some moments:

v0.4
– Quest with the Queen and Vica;
– Quest with Danka (both ways: when she’s yours and when she’s Pinos);
– Quest with Catherine;
– New scene with Pamela (gentle->blowjob)
– Total: 12 animations, 150+ images.
– Redone Harem, Farm and Mutant Camp (they will be changed by the quests);
– Increased quality of the new images and animations (I mean technical things – I hope you’ll see it xD);
– Fixed and improved quests description for new players (now the game should be much more friendly to them);
– Added 8 music tracks (this is the first music in the game, I’ll keep improving this aspect further);
– Added an option to change the relationship with your people in both ways (talk to Taina).

Small things and bug fixes:
– Megan steals less slaves max: 10->7;
– Less max slaves escapes: 5->4;
– Fixed a bug when Pamela get caught even if you deactivated the law;
– Now the selected tab (Active/Completed) and the selected quest are highlighted in the Questbook.
– Added an icon of the game.

Important things
– A scene with Pamela (was in the teaser update – you need 4 relation points. To get them be gentle with Pamela. Your prevoius choices are counted, so you can get the scene next time when she get caught).
– Continue the story about Lori’s mother.
– A quest with Taina.
– Main event of the update – Megan’s quest. The longest one-shot quest in the game at the moment. Make saves and check all options!
– Added a random animated scene (I’m cruel, I won’t tell you how to get it). I added it to make the game a bit less predictable.
– Remade an old scene with Megan (“Chasing Tsug” quest). Now it’s more pleasable to eyes.Small things and bug fixes
– Added Attack, Skirmish and Defend options to the combat. You can rush, if you have numbers and want to finish the battle faster. Or you can defend, if you’re outnumbered. If you don’t want any risk, just use the Skirmish – it’s a new name of the old Attack option.
– Slaves in the stock: +200;
– Now you can buy 50% of weapon at once;
– Added status report screen to Taina. Now you can get the report anytime;
– Changed the slaves cheat. Now it gives 200 slaves instead of 100 (to avoid starving issues);
– Fixed bug with negative food when starving. Now it can’t go below 0;
– Patched the Mutant Disobedience never complete bug;
– Added a scrollbar to the questbook. We have many completed quests, so we need the scrollbar;
– Minor fixes.

v0.6
In this update, I focused on technical things. First of all, I implemented some features that you have been asking for for a long time. Second, I’ve simplified the raid system a bit to make it easier for you to use it, because it’s an important part of the game. Third, I made the new animations even more complex by switching to new technologies of creating them. So this update will serve as a good base for further development of the game.

Changelog:
– New scene with Danka and Lori. You need to complete her quest and have Lori in your harem.
– Continuation of Ully’s quest.
– Continuation of Catherine’s quest.
– First meeting with a new character – Barbara.
– Improved fighting and raids (Please, folks, use raids to make money, don’t rape the skip time button).
– Increased base coin plunder in the raids: 15->17 coins per enemy.
– Increased amount of capturing slaves in the raids.
– Successful attack and defend give more kills and less casualties and you can’t lose more men, than enemy.
– Decreased the chance of failing to find something interesting in the Wastelands.
– As you asked, I made UI bar with your resources.
– As you asked, I made the Questbook bigger, revamped it (added bg image, a new scroll, made some other changes).
– Added tooltips for all icons.
– Fixed a bug with famine. Also now you’ll see more noticable messages in the weekly report, when your people are dying. Capture more slaves in the raids, or buy them from Cuman to solve the food issue!
– Added 30 and 50 options to “Make slaves into citizens”.
– Added negative limit to the Pamela relatioship points, when you caught her. Now it’s -5.
– Minor fixes and changes.

– 2 extra animations (aka extra angles of an existing animation) – the old code is still working, so if you already entered it, do nothing, you’ll see these angles in the repeatable scene with Ully. Also I improved the way of showing it, it’s more natural now (hard to notice that it is extra)

v0.7
This update is focused on your harem. You meet a bride for the first time (btw, she was made by a patron’s request) and Judy (Lori’s mom).
Changelog:
– New quest with Mia.
– Judy quest progression.
– Now ‘Law of the First Night’ works. You’ll meet a bride.
– A new sex scene with Danka in the harem.
– Pamela quest progression (on the gentle route).
– Now you can replay the sex scenes with Lori from the opposite route. If you chose to treat her well, you’ll see rough sex and vice versa. Just talk to her and select memories. Works only with the scenes you could see.
– Fixed the bug when you can’t get the night scene with Lori.
– Fixed the bug when you can’t see map icons after meeting the queen. (load a save before Dex came to your palace)
– 2 extra angles.
– Added a food icon to the UI, and made its bg larger.
– Added two new bad morning events: a slave or a citizen becomes tainted and moved to the mutant camp.
– Made Russian menus’ text fits the bg window.

Note: Lori’s mom quest says after you completed it: wait for her master to die (do other quests). For now it’s over. The progression of this quest will be in future updates.

v0.8
– Holiday event. To start it you need to get Mia. If you already did it, just wait for the next council. I decided to let you see all the content of this holiday update with all girls, no matter what you chose earlier. Ofc, your choices here will matter only if you get the girl.
– Ambush mini-game. I don’t need to write the rules, because I added hints in the game explaining everything (NB: you can turn on/off them). You just need to survive, using grenades and retreats. Make sure you have enough troops because there will be a lot of enemies! The ambushes work only for human settlements when you attack them! You have a 30% chance of being ambushed.

– You’ll meet a new girl if you win one of the ambushes. Read below how to make it easier.
– This update has a lot of animations (29 files, 3 of them are extra).
– Fixed the bug when you don’t pay coins for Mia.
– Fixed the minor bug with rollback on Sunday morning.
– I changed MC’s skin tone. You asked it, I did it.
– Increased the ambush chance
– Improved the pics in the barrack.

Now about how to get the scene with the new girl. First, make a save before you click “Go on a raid”. Then go there. If you didn’t find a human settlement, load that save and click on the raids again, while you get it. Second, when you find it, make a save again. Click “Attack”, and if you’re not ambushed, reload. Then you just need to win the ambush and you’ll get the scene.

v0.9
– New quests with Taina, Ully, Vica, and Judy.
– Added a Difficulty option to the settings. Also, you can choose it at the begging. The easy level will increase your weekly coins profit x2. If you choose it at the start, it’ll give you as well more of everything. I hope now the game will be more friendly for new players, who don’t like challenges.
– Added a new location (no spoilers, you’ll see it yourself)
– Added 200 slaves to the stock.
– Added an option “1” to make slaves, citizens, and soldiers. (f.e. now you can recruit only 1 soldier) I was asked to add it.
– Added an icon and loading screen to the Android version. (thanks to HiroNakamura for pointing it)
– Now you can ask Honk to tell you about any girl in the harem.
– Added a book in the hall. You can click on it to read. There you can find a link to the game Bonds of Blood of my friend and the translator/proofreader/editor of Lord King – TheDevian.
– Redone factory, hall.

v1.0
The story is gaining momentum. In this update you can add to your harem and take part in dangerous events in the war with the Horde.
– Those girls are involved: Barbara, Catherine, Pamela, Taina, Megan, a new girl (one-night stand).
– 5 new music tracks (thanks to TheDevian)
– Fixed a bug with Vica, when you see the xxx scene of v0.9 with her even if you didn’t choose the love route.
– Fixed a bug in the Russian version of the game when you can’t proceed the last quest of v0.9. Just go to the Queen at day, it works now.
– Minor fixes and changes.
– Version 1.0 does not mean that the game is done.

v1.2
– Progress of the main story (with a new (not exactly new, though, you saw her from behind) girl)
– A scene with Catherine
– A scene with Lori
– Bj scene with Mia in the harem
– Fixed a bug when you talk to Danka
– Fixed minor bugs.

ShotaOne Island! ~This Girl’s Breasts are Mine!~ [Completed]