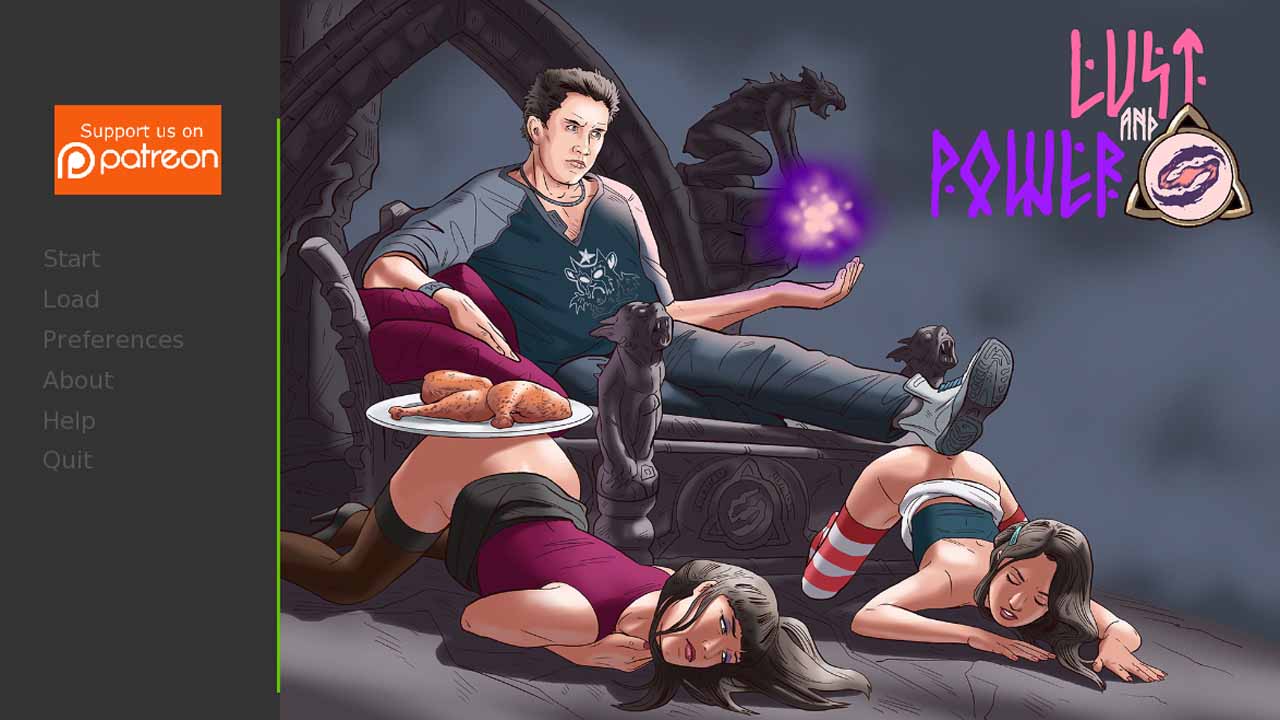 In this game you play as a young man, whose family inherited a mansion from a distant relative. There you are going to reveal some mysteries and to gain some dark powers. You will have to face demon attacks, to meet some strange persons, to protect your family.

All characters depicted are age 21 years or older. The story, all names, characters, and incidents portrayed in this production are fictitious. Any resemblance to actual persons (living or deceased), places, buildings, and products is unintentional and should not be inferred. The contents of this game were created for artistic and entertainment purposes.

Pay attention that you can’t run unlocked scenes successfully anyway if you don’t have enough love points or submission points of this girl.

Livingroom content:
– now Emma and Kelly spend time in the living room watching TV. We restored 3 scenes with them (you join Emma watching TV, you join Kelly watching TV, you join both Emma and Kelly watching TV) and 2 options for each situation (you ask politely the permission to switch the channel, you switch the channel without asking) with extended texts.
– we also restored the option of player visiting empty living room and watching TV alone.
– we added 25 new newscast scenes on Demon TV. They’ll tell you about the events that happen in the area.
– among the newscasts you can also see special interview videotapes with Olyvia that have totally new illustration.
– we restored 3 hot scenes with Samantha on Demon TV

Demonhunters’ content:
– restored a scene where you meet a lonely Demonhunter (or a Demonhunter with carriage) and introduce yourself. Restored all options of exchanging vine or beer for food or demon hearts or information until he tells you about their base location.

Police station content:
– restored a police officer demon type of the enemy – a Biter.
– added 11 new animations for the battle with a Biter demon.
– restored all options of entering the police station (attack the guard or sneak in unseen)
– restored 3 scene of Fiddle giving the player a task and 2 scenes of Fiddle rewarding a player (the 3d task can’t be finished in this version yet.)
– restored the ability of getting special ingredients from the bodies of defeated enemies.

Interface:
– restored the strategy screen where you can see area tasks and plans for defeating Olyvia.

Items:
– a bullet-poof vest. A new equipment for the player that provides better armor and helps to survive in a battle.

Magic spells (visit Lisa in the library and talk about magic spells from time to time to unlock):
– added new spell – Stone Ram. This spell deals damage to the enemy and destroys enemy’s armor. The only possible way to destroy armor in the game.
– added new spell – Stone Wall. Stands between you and the enemy and blocks direct attacks until destroyed.
– restored a spell – Dark Drain. A spell that steals enemy’s energy. A good way to restore your energy and weaken the enemy at the same time.
– restored a spell – Telekinesis. A spell that attracts small distant items to you. For current moment is totally useless in the game, but you can unlock it now for future.

2) Now you can find/make and wear 2 new armor items: Golf Helmet and Home-Made Vest. Each item gives you 1 armor point when equiped. Helps you to ignore damage in battle.

3) The following new art was added:

v0.40 Regular
– now you can use upgrade points in the library to make your spells stronger. You can use upgrade points in various ways: either reduce energy cost of the spell, or reduce cooldown time, or increase the duration of the spell, or increase the effect of the spell. So, for example, you can decide if you want to construct cheap and weak spells or expensive and strong. Be wise, your choice can’t be cancelled.
– now you can use the table in your room to navigate through Patreon rewards. It contains all the links that you need to find rewards on my site or activate them (like cheats or outfit spells).
– added 3 new magic spells.
– added 9 new items that you can find during your raids.
– some food now automatically stored in the fridge.
– fixed the bugs that you reported about
– now having meal in the kitchen restores twice more health and energy
– added 3 scenes of talking to ancestor about some important things in the basement.
– added 3 scenes of ancestor teaching you new magic spells.

So, to sum, we added 7 hot scenes, 17 common scenes, 2 new interfaces, 3 new spells, 9 items and some bug fixing, and it took us a month. So the speed of restoring + extending the content of the game is really close to 1 scene per day which is exactly what I expected it to be. Sorry for being silent for the recent month, sometimes I’m just in the circumstances where I can’t keep you informed, but I always try to see to any opportunity to fix it.

v0.37 Regular
+3 new scenes with Roxie.
(To start her corruption, first get at least 30 points either of her love or her submission, then she’ll ask you to train her and after this her corruption options will become unlocked. )

– we added + 2 animated scenes Lisa’s room. Now the player can touch Lisa’s pussy or watch her playing with her pussy.

– we added the progress bar to the part where the main character is sleeping in his room. It’s a part of the game where the code still needs some optimization, and the game slows down a bit during this part, so this bar will help players to understand that the game didn’t crash but executing the code at the moment (especially helpful on android devices).

– there was a problem with the game showing “the infinite loop” error on slow android devices in that part where the main character is sleeping. As far as I can judge using my own device, this error was successfully fixed in this update.

– game crash if you visit the bathroom while Kelly is there while she’s wearing her red towel. Fixed.

– game crash if you try to use Stun Charm on plant demons in the forest. Fixed.

v0.31c
– Jessica’s sex scene crashed if you run the scene while Jessica wearing dog outfit. Now fixed. Great thanks to Mirok Natsume, Isaac Tebbit and Doom stack77 for reporting this.

– when you ask Lisa to wash you in the bathroom, game crashes. Now fixed. Great thanks to Dubsington and Zaitsu for reporting this.

– when you ask Cherry to take off her dress or play with her tits, game crashed. Now fixed. Great thanks to Dubsington and Zaitsu for reporting this.

– when you ask Jessica to bend her knees while she has her jeans on, game crashes. Now fixed. Great thanks to Jacek Blonski for reporting this.
v0.31b
N/A

v0.3b
– We added + 4 new scenes for Lisa, as was decided by the results of March poll. 3 scenes are in her room in the library, and 1 scene in the bathroom. And yes, Lisa starts visiting the bathroom in the morning again starting from this version.
– We added new quest from Fiddle. It’s a side quest, and it appears after you finish the quest of potion making. You can run it by pressing the button “Recruitment” on the Fiddle menu. After finishing this quest you get several new advantages:
1) Fiddle introduces you to his colleagues in the next office. Starting from this moment you can join to demons during Ann and Susan scenes and not just peek them through the door, but take part in it.
2) You can repeat Ann and Susan hot scenes as many times as you want. You can strip-search them personally. And if you make them strip-dance first and after that make them kiss each other, you can see their kissing scene while they are naked.
3) You can recruit demons in the Fiddle office. Each recruited demon gives you 10% chance that if you meet yellow demon on town streets, he’ll turn out to be one of your recruits and will give you some useful item (wine, batteries or food) instead of attacking you. It makes sense to recruit 10 demons to increase this chance to 100%.
4) You get a special key from the back door of the police station. Starting from this, the option “Sneak in” is replaced with “Use the key” option and you can enter the police station without any risk of being attacked.
Bugs fixed:
– Game crash during Jessica’s handjob scene. Now fixed. Thanks John C. Finley and Martin Libby Sr for report.
– Game crash when you have Jessica give you a blowjob if she is not fully dressed. Now fixed. (in v.0.30.b)
Thanks everyone for your support! Don’t miss the poll, it starts within a day or two.


Check out this cool games