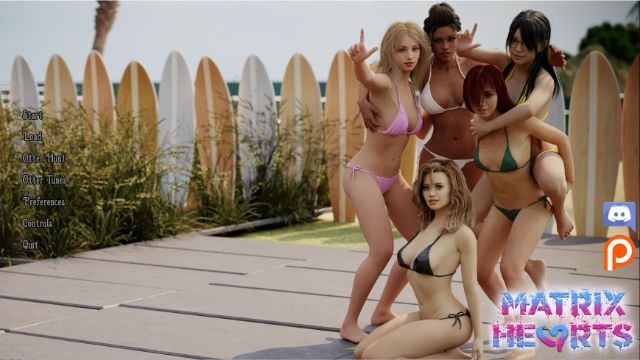 Matrix Hearts Android Port – He was supposed to be somebody. He was going to be a contender! Then he took a rock climbing wall to the knee. A would-be Olympic climber sustains an injury to his leg that keeps him from competing and a shot at the big leagues, with the only possible fix being a prototype technology that is sci-fi at best. Between his new introverted mood, a town of colorful characters, and the fruits of temptation, getting this tech to work may require all he’s got. There’s a big cliff to climb for him to be a champion again!​

Chapter 2 (v0.2.1)
+1000+ new renders
+25 new animations (There’s a few we have to fix the pants on and one where we think one of the frames is off. Fixing in next update)
+20+ new licensed songs
+Replay Feature
+Proper music room with all songs added
+1-3 hours of gameplay depending on read speed, attention to renders, and replays

(Gameplay Changes)
+The Lust counter has been removed because it was causing too many complicated paths, and we didn’t want to close things off offering only Lust encounters
+Matrix Hearts can now only be gained. You are going to have to work at them with the right choices!

v0.1.2 (Chapter 1 in full)
+Updated almost all scenes to higher quality (with exception to a few hair clippings and a scene for better lighting)
+ 3 Point and Click Spheres! These are single renders. No grinding, no clicking to get to new zones, only a single render (or sphere) for added fun. Get your click on and explore side-stories with other characters, gain knowledge about the town, and introduce yourself to Zippyzinc! (Once again, these do not affect main story).
+100 new renders
+ All routes should be fixed now
+Updated UI