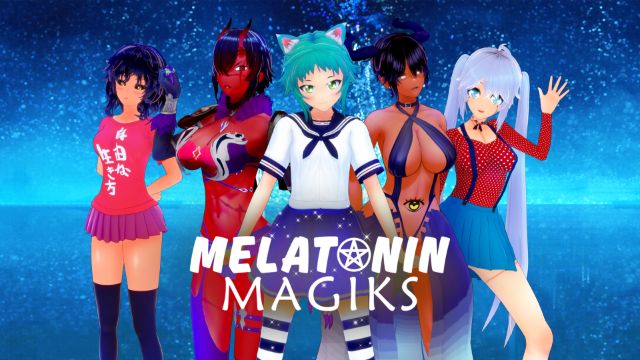 Melatonin Magiks APK Android Port – You were sleeping? Woah! And now your awake? Woah! And there’s a catgirl? Woah! And she has a robot friend? Woah! And you have a childhood friend with short hair, tanlines and brown skin who likes to wrestle? Woah!
PLAY CHAPTER 1 before CHAPTER 2, Separate game builds.

Changelog for Melatonin Magiks Chapter 3 v1.0:
Disclaimer: No anime girls were harmed in the making of this update. Three LI’s have had most of their repeatable content restricted for story purposes. All of this content can still be viewed through the replay gallery.

Changelog for Melatonin Magiks Chapter One v3.0:
Update this month is Chapter One V2.1 —-> Chapter One V3.0
What this update is:
A rerendering of much of the early content of the game. An upgrade from a VHS to a Blue Ray.
A bunch of what I like to deem eye cancer, from when I didn’t know what the fug I was doing, has been bought up to current quality standards.
What is update is not:
A remake, a reboot, a massive retcon, ect.
No content has been removed, content has been added.
Only one scene was half rewritten, one of Ona’s H repeatables. I think I added a single line of dialogue when you first meet Neko.
The game has not been retconned, it is still the same old silly mess that it always was. It just looks a lot better now. That’s it.
By and large it is a shot for shot rerendering. I tried to keep the original vision as intact as possible.

– Added a replay gallery, you can set pet names in settings.
– Fixed the main menu, you can change the backround in settings
– The music room is inclusive of 95% of the in game Music
– Updated Events listed as they are listed in the replay gallery in order:

All in all there’s some pretty sweet H content, so have fun, play safe. Kisses xoxo.

A note on the replay gallery:

Happy this is here, not happy by how much time it took to implement. This is the perfect way to track what content is in game, and view it all from one place, though there are some advantages for some repeatables when replaying them from the normal game channels, namely dialogue. Please help me find bugs, the one I am most concerned about is if events become unlocked before they should become unlocked. Other bug issues would be more obvious, if you find any please message me. The only events not yet implemented in the gallery are the milk shed BSDM scenes. Speaking of dialogue, if you ever wanted to see what Neko would say if she called you ‘Catlord of the 2019 movie Cats featuring Taylor Swift’ during a scene now’s your chance. Overall I’m super glad it’s in game.

One new event with Ayame.

One new event with the cow girls.

One new event with Emi.

One new event with Zimira in the Coffee shop.

One new event with Inux, if you are on her romantic path, you’ll run into it if you’ve completed Ona’s 6th story event when accessing the world map.

One new repeatable event with Alyssa in her room during the morning/afternoon.

A note on MM.Chp1 v2.1:
So this is an updated build for Chapter One. No more lag/crashes. A few updated CG’s. Fixed transitions from the stability patch. Lots of typos and a few bugs.

A note on the newly added Kawaii system:
Yes, that’s what I’m calling it. Because it is. By popular demand Headpats for all the main girls have been implemented in their rooms.
Ona and Neko-Chan have an extra option, you can ask them what they’d like to do and they’ll take you on a mini frame cute activity.
It’s a pretty nice start, all dialogue options change depending on the day to keep things fresh, have fun with it.

No new story event for Ayame in this update, I want to purchase music rights to a song first and I ran out of time. If I can’t get the song I’ll still make something happen, we’ll see.

Nothing new for Zimira this update, all the custom animations in the H scenes I made for the other girls cut into my time. There’s a lot I have planned for her. And other things, I’ll get to it all eventually.

You can now take Lorica to the milk shed, once you’ve completed her story event for this update and also if you’ve already taken Haru and Emi.
Delphina has a new repeatable event in her domain, check it out, I’m rather proud of the animations.

A note on Ona’s second story event:
It is long, it is fun. It’s a climax, of sorts. Be judicious with your clicks when there is no character dialogue.
It is unlocked once you do Ona’s first story event for this update and also Neko’s and Alyssa’s. Enjoy it.

No new story event for Emi in this update, for story purposes. She’s still around in other events. I think she’ll be the next girl to get an arc of sorts.
So don’t despair Emi fans.

You can now take Alyssa to the milk shed, after you’ve taken Nerilla and Vita.
One new punishment option in the milk shed for Nerilla and Vita, unlocked after taking Alyssa.
Lorica now has a repeatable shower event, unlocked after doing her story event for this update.
I reanimated Neko’s “quick fuck” repeatable event in her room, the new animations are really good, try it out.

A note on impregnation and the future of pregnancy:
You can impregnate the cowgirls, Ushio and Eidele. The scenes are fun, however there are no scenes with a belly showing yet. I’m testing my idea of pregnancy out on the pair first, before the other girls. Get this, my brilliant idea. Nine months, and a baby is born. No magic spells, no potions, no insta pregnancy. Just good, old fashioned, story driven pregnancy. Let’s see how it goes.

Major bugfixes: Both Haru’s night time H scene in Emi’s domain and Neko and Ona’s beach H scene repeatables have been fixed and can be played again.

THIS IS A NEW GAME BUILD, DO NOT TRY AND IMPORT SAVES FROM THE FIRST GAME.

A note on the intro: It is long, it is fun. Cliffhanger justified. Be honest on who you have had sex with, If you say you have not had sex with a girl you will just be locking yourself out of content for every girl except for Mimika. Do not click on any render to progress except for when there is character dialogue or you will miss out on frames. Adjust your sound and music volumes to a comfortable level.

A note on Delphina’s 3rd story event. It is the climax event for the update, it is very long. Once you do the story events for each of the other girls other than Neko-Chan it will unlock.

No love for Zimira this update but her last story event has been made repeatable.

What is being done about file size:
All .pngs are now .webps
I figured out how to compress my .webms while retaining 99% quality.
Melatonin Magiks Chapter two is going to be released as a separate game, following the same story, same characters, right where this one leaves off.
The file size will be reset, all the story events from Chapter one will be removed, all repeatable content will carry over.
Stay frosty Lads.


We disable comments to the public due to high volume of traffic and spam comments, Commenting is only available for VIP members.
4 3 votes
Total Game Rating
Subscribe
Please login to comment
4 Comments
Newest
Oldest Most Voted
Inline Feedbacks
View all comments

Where is the android chapter 1 link? only 2 and 3 chapters here.

Please update the latest version of the game

Dancer And A Lustrous Stage [Completed]