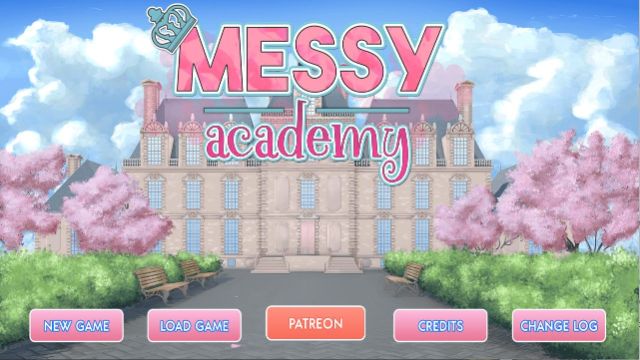 Messy Academy is an 18+ adult/porn visual novel that focuses on diapers! It’s a general school life, slice of life feeling series that not only focuses on the adult related content. But it contains comedy, drama and romance as well! There is excellent world and character building going on in the game.

While on the surface. This might just look like another adult porn fetish style game, which it is… But! It’s much more than that and don’t expect to jump right into having sex in this game, as it leans more on the realistic side without being too realistic either. Not to confuse this game or compare it to other diaper fetish games out there, this game does feature actual sex and acts that most games within that genre don’t touch. That said, the diaper aspects lean mainly on the diaper lover side, with not much, if any focus of the adult baby diaper lover aspect involved.

While we do accept feedback and even suggestions for content, keep in mind many things are on our list to address or fix as it is of course very much still in progress, updating monthly. We do have interest in revisiting older content and fixing things up with pacing issues, awkward dialogue or grammar, etc. We also have had bad luck with CG artist related aspects for our supply vs demand in the past/current. We are carefully planning how to address this issue very soon and hope to have 3-4 new CG art pieces each month as we head into October. Thank you for being so patience and understanding during this time.

Story Summary
You play as Brandon Wilkins, a 20-year-old decently geeky guy who is tired of being a virgin. Unsure yet if he simply wishes to get laid, or find a girlfriend, he begins his search online, and comes across an interesting webpage for one. Kaikaku Academy, an all-girls private college campus.

Briefly fantasizing what it would be like to be the only guy in a school full of women, the reality that they’d never let him through the gates, let alone enroll there, leaves Brandon feeling crestfallen. Before he closes the webpage, he notices it isn’t a well-secured website, and begins digging around. Not only does he uncover a loophole in their security protocols, but also in their enrollment contract. He decides to put down his name, along with those of his two buddies, onto the transfer list. What did he have to lose, after all?

Weeks passed with no word, and he almost forgot about it entirely, when a letter arrived notifying Brandon of his acceptance of transfer into the academy. He quickly confirmed his friends had received their acceptance letters as well, and they shared daydreams of the possibilities awaiting them in an academy filled with girls.

The boys excitedly arrive on their first day of school, their thoughts already filled with chasing after the girls and getting to have the school all to themselves. But their little celebration is short lived after they meet John, one of the teachers at the school, who introduces them to the rules. The main one being that in order to attend Kaikaku Academy, students must wear diapers at all times, and to make matters worse, access to restrooms is forbidden.

After a tough decision, they all agree and accept the academy’s conditions. Being the only boys in an all-girls school is too great a temptation for them to pass up. But will they survive the punishments? Can they figure out how the school keeps this all a secret from the public? Will their goal of getting girlfriends even be possible when they’re all wearing diapers?

Messy Academy contains scenes of sexual content and is intended for adults only. Any art or implying of characters being underage within the game aren’t meant to be done so. While the game is set at an academy, these characters are not underage or minors, nor are they based on anyone in real life. Anything that might suggest these mentioned themes are purely part of fetishes or kinks that might be suggestive, but not intended to play them off as underage characters. There might be routes and choices in the game that lead down some hardcore content, we try our very best to keep a updated list of tags towards the top of this page to warn of this content, in most cases these extreme or hardcore content choices are optional and will give a warning within dialogue or story before hand. We understand that even if our story and character building could be good enough to stand on its own, not everyone will be interested in a game that still has a focus on diapers. That’s your choice, as much as one might choose not to play any game with “insert fetish/kink here”.

The team behind the game takes no responsibility for anyone under the age of 18+ who decides to ignore our warnings and play the game on their own will.
Q: Are updates for the game like patches or is the latest update everything in one?
A: Latest update is everything in one. No need for anything else.

Q: How do I pick up from where I left off in a previous update?
A: Ensure you save close to the end of the update’s recent content/episode that was added. Take that saved data and move it into your next update game folder for it to work. (If you by mistake reach the end of a new update’s content, you can make use of auto saves to quick load a few screens back and save)

[IMPORTANT: Saved data from Version 0.15+ should work across newer versions of the game released to continue from where you left off.]

-Some light wording fixes from episode 3.

-Transferring saved data from Version 0.15+ should work. Reminder that I believe you need to have said saved date close to the end of a episode for it to work correctly.

-Sprite positions have been adjusted.

-Patreon supporters from 2021 and those who supported in Jan/Feb 2022 at least $5+ for one time, will receive a personal direct message from me on Patreon with the download for v0.19.5, same for v0.20 to make up to our supporters during our awkward 2021 development.

-Text box ui visuals are awkward and we’re aware of this. The finalized gui text box will be added with v0.20 release. (Little by little each release will bring new gui assets added.)

-Transferring saved data from Version 0.15+ should work. Reminder that I believe you need to have said saved date close to the end of a episode for it to work correctly. (There might be some weird visuals in the load data screen, because of the 1280×720 aspect, where now the game is in 1920×1080.)

-Previous content from v0.19
-Game has been updated: From 1280×720 to 1920×1080 resolution! [We highly recommend going into config settings after starting a new game, changing it from windowed to fullscreen mode to get the best HD experience with the game. It’ll look best on 1920×1080 monitor’s naturally.]

-Android builds have been known to not run on some mobile devices or other issues with running the game, it crashing, etc. Mobile builds are more seen as a bonus during main development, if they work for you, that’s great. But just be mindful to test the public builds of our game or have a pc/mac as a backup option if you’re thinking of supporting us purely for mobile builds during main development.

We are taking bug/issue reports with mobile though! Please provide us with what model/specs you’re having issues with and as much details as possible regarding what is happening with running the game, etc. (This will help us at the end of development to optimize our mobile finalized build.)

(Below is a rough outline of what we expect, it isn’t to be taken as set in stone until released.)


We disable comments to the public due to high volume of traffic and spam comments, Commenting is only available for VIP members.
1 1 vote
Total Game Rating
Subscribe
Please login to comment
1 Comment
Newest
Oldest Most Voted
Inline Feedbacks
View all comments