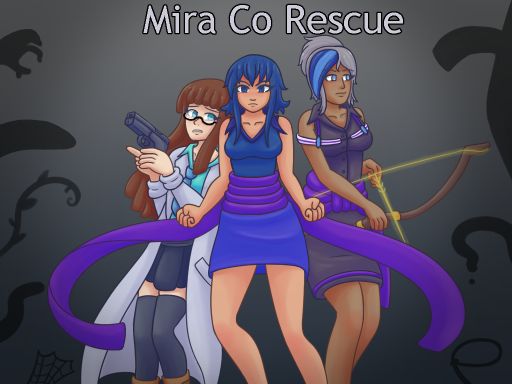 Mira Co Rescue is an RPG Maker MV RPG with a lewd state based combat system. Multiple enemies with different fetishes/perils to inflict on the three party team!
Mira’s tricks have finally landed herself and her friends in a mess of trouble. Now that her maid staff has been captured by the various creatures of the land, Mira, Hemmy, and Selena must travel the world to save them from being an endless supply of Mana. But they must tread carefully themselves as they can just as easily end up needing rescue as well!

-Fixed a bug with the Silk Worm which caused 0HP to not correctly register as ‘Captured KO’ state.
-Added in some of the updated art that didn’t transfer to the new build correctly such as Enemy Sprites.

[Bug Fixes]
-Fixed Skill Update crystals that appear in the Khrono Courtyard and the special area accessed through the Key Item “Ankhrono Replica” to unlock all skills that were added to the game if you are using a different save file.
-Updated Battle Text
-Fixed Sarcophagus Core not being sellable
-Fixed some skills being accessible from normal menus instead of only battles.

New Manor Functionality:  Manor Restoration has been updated to restore some rooms in the Manor to interact with.

Spend 2000G at the store to unlock it. (Required for some City Events)

Battle Room/Gallery:  Accessed through Key Item “Ankhrono Replica” there is a gallery to view all battle sprites/unlocked game overs and a battle room to fight enemies.

We’ve reached another milestone build of 0.4.0!

This build is mostly cleanup of current art assets and adding the missing Game Over sequences for all enemies in the three finished areas.

-Work on completing the remaining work in progress map, the Khrono Tomb to round out the current content that is available.

-Complete Game Over sequences for Holiday Enemies and Khrono Tomb.

-Further Mira’s side job which can eventually lead to game overs.  Introduce Hemmy and Selena’s side jobs.

-Implement more side events at the Khrono Manor that involve saved maids, recovered objects, and visitors  from completed areas.