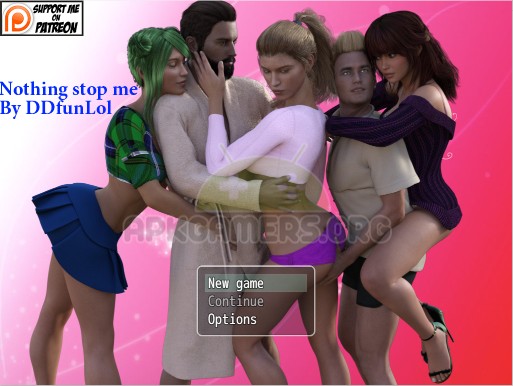 Jeff and his two cousins Megan and Karen live with their aunt and uncle. It’s the beginning of the holidays and his PC is down. It’s shit when you like geek. It takes money to fix it. Money doesn’t come from the sky, you have to get it. Don’t have any remorse, no pity, only the money counts.​

I advise you not to use the help file at the beginning in order to better enjoy the game.
It won’t be a long game, it will allow you to play between two updates.
You will play Jeff, he lives with his two cousins in their aunt and uncle’s house.
The game is not linerary, you are free to go where you like.
Fulfilling goals will make you advanced in the game.
The game is in its infancy, so still limited,read help file.

Some objects are hidden.
Only one playable character.
2 Maps.
More than 400 images in HD.
6 animations.

V2
– Several hundred images added.
– Total, 20 long animations and some small.
– New : Jeff’s best friend, as well as his parents. His house is to the left of Jeff’s house.
– The dialogues were worked in some parts of the game. But there are still corrections to be made with the translations.
– The Quest list is no longer available in the computer.

v2.6
There is only one thing added, the story of Cecile but..
-It’s 18 new animations.
Some have 19 images per seconds for more fluidity.
-Near 250 images in the story.
I do not count but I think there are more than 600 images added.

v2.8
About the game:
This is version 2.8 of NCSM.
Lots of unforeseen events and work in recent weeks.
I couldn’t finish the latest version of “NCSM” in time. V3
So you understand that there will be yet another version
There are many things I didn’t have time to change in this version before making it available.
I wanted to put a replay room, which took me the longest.
Like you, I have to play to do tests, so hundreds of games.
Unfortunately the replay room is not yet available, there are still too many problems to solve!
What’s new in this version.
4 new quests and 1 game!
-Sperm donation.
-The little plague.
-share with your neighbors.
-a good pimp.
-the game: don’t fuck my mom!

v2.9
Rebuild version:
New version of RPG MAKER MV, old version 1.51 – new 1.6.1.
Changes to RPG MARKER plugin scripts for “NCSM.”
Nearly 2000 new script lines in the game to display the images correctly.
The message “Now loading” no longer appears!
Using memory with the old version: 1 to 3G ram.
Using memory with the new version: 100M to 800 ram.
Added two animations for old quests.
Quest :The little plague.
Quest : Cecile’s diary.
– Two complete quests.
Several hundred new images and nearly 15 new animations.
– The replay room.
The replay room is near Jeff’s room, the staircase that goes up to the upper floor.
The list of available replays is in the text/help file of the game.
The way replays play is not definitive and can be changed, your opinion is important.
-Changes made to certain dialogues and translations.
-Changing the size of the text.
-Some animations have been changed, more images for more fluidity.
-Choice of views in the new sex scenes.
Very important! don’t use your old backups “savefiles”, they’re not compatible with rebuilding.
Use the game files.
No need to restart the game to see the scenes, just go to the replay room!
Help and list of repeatable scenes in the help file!
Replays can be added easily with a patch, write to me if you want me to add more!