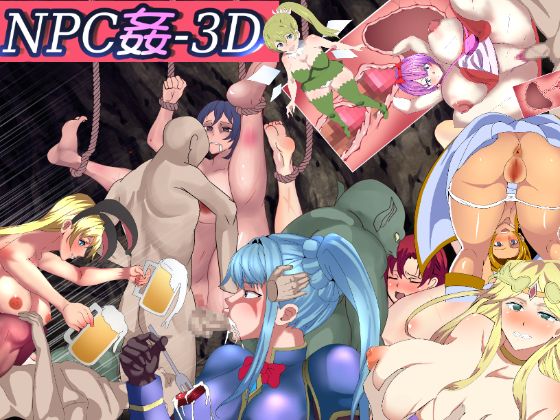 Village of the Beginning (Field: Northwest Village)
A mother comes to wake her son in the morning.
A girl sunbathing in the sun
An adventurer woman who came to visit her brother’s grave.
A woman working as a farmer.
The village chief’s daughter.
A girl in a tool shop.
The nurse in the first aid room
A female soldier who eats delicious looking food

Goblin’s den (Field: Southeast dungeon)
Female heroes who have come to defeat the goblins
The female wizard of the heroic PT.
A swordsman calls out to a dying soldier.
A woman in manacles asking for help.
The innkeeper’s daughter.
Sister of the church
Driard, the spirit of the forest←ver1.02 added

Castle Town (Field: Central Town)
A woman who can tell you the name of the town
A female priestess who preaches the teachings of God in front of the faithful
Guild receptionist
A female martial artist who has just become an adventurer
A training instructor doing squats
A bunny girl in a bar
A girl who uses demons←ver.1.01 added

In the castle (Field: Central Town)
Princess
The prince’s maid of education
A female elven knight bound to a wall.
Slime girl with intelligence
A goblin’s impregnation sack

In the goblin den, there is a description of a woman being raped by goblins.

However, the game consists of a 3D map, so depending on your PC environment, you may experience choppiness or freezing.

4 Due to the specifications of Tucool MV, compatibility with past save data may be lost when upgrading.
If this happens, please start over from the beginning.