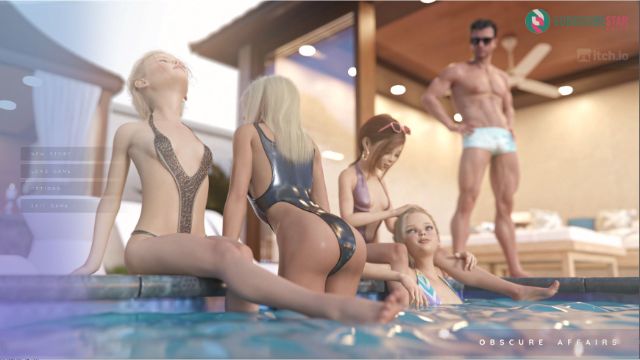 Obscure Affairs is about you, and only you! Going through some rough times, a failed marriage which lasted a few years and ended up in a night, but some time after you managed to get over it and start over, this time from zero, and hope you get back those years of youth which you lost, and somehow you managed to do that, but we’ll see how that goes…

Through the game you’ll meet different characters, some may affect the outcome of the story, some may not…

The Characters
Most of the characters will be fully customizable, like their relationship to you, their name, age, or nicknames depend on the character.
(Below you can find a short description about them, those are canon names, but you can change them in-game if you wish.)

MC – Or the Main Character of Obscure Desires, he went through a lot in the last years, but he finally managed to get that divorce, even though he was left with almost nothing, somehow he managed to find a cheap rent with some students and moved in with them for a while.

LEAH – She’s mostly done with the years of college, goes to the same college as Eliza, they met in the first years and remained best friends all along the years, both of them moved together after a while, as for Leah, she’s a bit different, her two sides show up often and MC may or may not like them…

ELIZA – Quite different from Leah, but even through with these differences they’re still the best friends to have around, ready to help whenever they can, as for her, she’s a mystery, each day with her feels like a new one and at the end of the day you’re thinking you met someone new, that’s just her…

DIANA & ALICE – Both of them are quite inseparable. They moved here from the other side of the country. When they arrived at the train station they bumped into Leah, from there it’s another story. Let’s just say they were housemates after just one week. As for them, they grew up together in the same block and once they were done with school, both of them went to the same college, hoping that, here people wouldn’t laugh at them because of their look and because they are inseparable…
Features / Fetishes
– Enhanced FullHD Visuals
– Customizable Characters
– Different Outcomes for choices and Character Paths
– Animated Scenes in FullHD
– Multiple Choices
– POV Scenes
– Lesbian / BDSM / Feet / Ass / Lickin

v2.50 Ultimate
Hey there,
The latest update 2.50 it’s now available here too, decided to share it faster than before now cause of the whole new year thing, Christmas and so on.
This update only includes the Christmas event and some major fixes for the UE version, which was missing some images, and some script fixes, I really have no idea how I missed that, but anyway, it’s fixed now and fully compatible with your older saves.
Regarding the free version, it’ll stay up to 2.20 for now, no ETA for 2.50 SE when it’s going free, for now.
The major update regarding the plot and some outcomes will be in 2.60 and 2.70.

Intro Finale
There were some fixes done to the scripts, which shouldn’t affect your saved games, UI issues are now fixed till the final version of game UI and some other things.


We disable comments to the public due to high volume of traffic and spam comments, Commenting is only available for VIP members.
4 1 vote
Total Game Rating
Subscribe
Please login to comment
1 Comment
Newest
Oldest Most Voted
Inline Feedbacks
View all comments