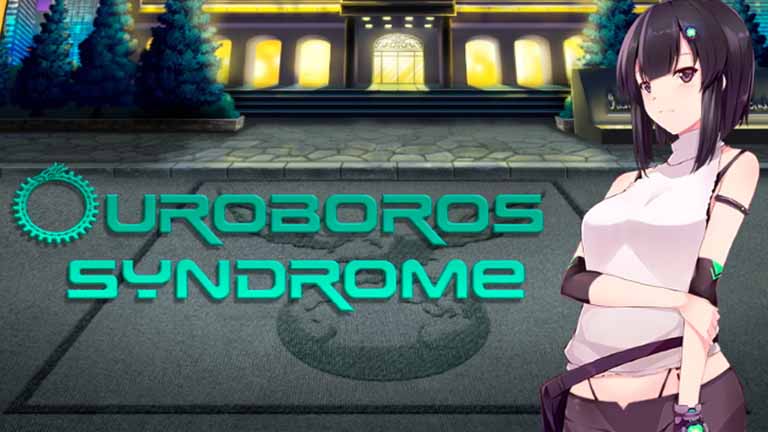 Kira is among the chosen few who enjoy life inside the Core part of the N city. Yet at one fateful day, her whole life turns upside down and she finds herself on the street with an offer from a gang which she can’t refuse. Will she cope with the situation and get her revenge?

Become part of N city’s criminal underground, take part in power struggles and intrigues to become stronger. Gain allies to build a trusted team and overcome all obstacles to get your sweet payback.

Ouro’s story unfolds in a cyberpunk setting inspired by classic stories and newcomers alike. The game features fully animated H scenes along with crafting and gear customizing so you could make a build fitting your playstyle. Will you become a merciless gunslinger or ghost-like hacker? It’s up to you!​

v0.1
Some players expected more direct combat and you will see it v0.1. Kira will get her first ”real” task and unlock the option to take missions from Freak. These will be primary ”battlegrounds” for the start of the game with their own local goals and options to reach them. Which one will you pick? It’s up to you.

Also, Ouro v0.1 will introduce the first classic puzzle. These will be close to Yorna’s, with Kira interacting directly with puzzle pieces to solve it. I believe it interesting to mix classics with hacking to keep the gameplay dynamic puzzle-wise.

H content
As always, the new version brings a fresh H scene to the table. Unlike previous scenes, this one has 4 phases instead of 3. It’s part of Dan’s line and features another filming with him in the club. This time he has a plan to stage a small story episode with endurance training for a screwed-up athlete. Guess what? Kira’s got the main role

The scene is completely optional and won’t count towards the “cleared” counter.

New features
All weapons received new animations for their shooting options. Some animations received timer tuning so players will see the full playthrough but, at the same time, won’t have to wait a lot for the game to display damage results for long bursts.

Kira’s apartment got a new optional upgrade – a sound system available via online shopping. With its help, you can switch background track for your home to suit the mood. Plus, Wrench will add new ones to your collection after you’ll get him old CDs. The first one is available on the secondary mission in Ouro v0.1. I wonder – will you recognize which retro game used it?

The “skill growth” system I talked about in dev’s plans is in the game. From shooting to salvaging useful materials – keep doing it and Kira will get passive perks depending on your activity. But don’t be afraid to check out other weapon or playstyle options.

Ouro received a new pack of weapons and mods for them that will unlock after the first story mission. You’ll find them in the specialized shops in the trade quarter and Wrench’s garage. Also, Wrench has a new option to purchase crafting databases to unlock more options during manufacturing.

New clothes
v0.1 will bring 2 new clothes. Yoga sportswear that players picked during the poll will be available in the armor and clothing shop after you finish the first story mission. Kitsch gear will be awarded as a present during the story along with some visual changes for Kira.

Interface
The feedback poll is over and looks like most players want to have sound support in the ”Animation only” mode from the gallery. Sure thing, I’ll use it as the default option for the new toggle. Ouro won’t forbid you from switching it anytime you want – just use the ”Options” menu.

Fixed a rather strange bug with the Alt button activating ”Auto battle” feature. Some players were surprised the game won or lost battles for them after they Alt+Tab’ed out of Ouro. This will no longer happen from v0.1 onward.

Also, I made a pack of minor improvements to the player’s GUI. There is a pack of small tweaks like showing HP and EN bars in the items menu so you can see Kira’s status before and after using medical supplies or batteries, formatting for the main on-map menu, etc.

Adjusted combat menu for mobile versions so it wouldn’t require you to scroll to see all basic options.

Small changes & fixes
Fixed a pair of problems for Ouro’s mobile version. These issues were tied to logic quirks between Android studio and apk packing scripts and could prevent the animation from playing.

Adjusted Kira’s sprites so she wouldn’t look like an actor from “Mars attacks” during her faded-out dialogue state.

Removed chance rolling for all material nodes in the sewers to provide a reliable “parts” source for crafting. “Freeroam” zones will introduce richer options later in the game.

Fixed typos and NPC/map inconsistencies during the intro section.

Expanded the description window so long vertical characters like y or g could properly fit without clipping.

Fixed rat’s sprite. It no longer has extra pixels during the movement to the right.

Added sound effect to all SecuLink conversations to mark these as external communications and not regular dialogue.

Starting with v0.1, Patrons with Master tier or higher will receive movies with looped animations along with the usual screenshot. Also, I’ll make a poll to discuss it further during the next month.

I used the extra time to make an extended hacking tutorial – some players mentioned they find hacking minigame to be hard. So, I did an in-game guide based on the first hack in Wrench’s garage. You will be able to use it both during story playthrough and after it – just ask Wrench about hacking exercise and he’ll set you up.
Some wanted to see more action with repeatable combat encounters and the new release will give you such an option. After clearing the main story content, Wrench will contact you about a new car in his garage. You can use it to enter a free-roam zone consisting of 3 maps with respawning enemies and resource nodes. Yeah, just like in Yorna.

Hidden caches came back in v0.1.5. These use logic very similar to Yorna’s treasure hunting. Players will be able to find or buy maps with caches marked on them. Get to the correct place, use the ”beeper” (new equivalent of a shovel) and if you did everything correctly – loot the booty. Yarr! You can find pretty much everything in these caches – from money to supplies and upgrades. See Onyx in the “Safehouse” hotel after clearing the new main mission for these.
Also, he will offer Princess a secondary questline, mainly focused on puzzle-solving. Buy the new apartment’s upgrade, beat the puzzle and get a new software package and some cash. Who knows, maybe working with Onyx will turn out to be a real gold mine?
Added lore and setting related information to Freak’s dialogue options. Some players wanted to know more about the N city and their surroundings. The new release gives you such an opportunity – just pick the new dialogue option in Freak’s arsenal and ask away.
Players who tried out weapon modifications mentioned that experimenting with different guns and attachments gets expensive pretty fast. I already thought about it before the v0.1 release, just didn’t have the time to implement a solution. v0.1.5 will bring it in the form of clean-up kits. These will allow you to uninstall all attachments on a weapon and return it to the original state. You can reuse the attachments gained this way. Ask Wrench about these.
Kira’s arsenal will expand with more combat implants and more interesting melee options. Since her energy reserves are more geared towards healing and defense, I want to offer a more aggressive approach with EN-consuming skills. These will use melee attack for damage calculation and reinforce high subtlety builds with pistols and SMGs with more offensive options.

Changed credits gain pop-up logic for Dan’s scenes so it would fire after the player is already on club’s map. This way it won’t fade out too quickly leaving you unsure if you got the reward. This change has no effect on the amount of gained credits.
Also, I added floating icons to dialogue scenes where get items or weapons like Freak’s initial scene, hacking Wrench’s notebook for the first time and so on. This way you can’t miss the new item.
Made some minor improvements to the interface – rearranging some menus and texts in the tablet screen + energy costs. Now, if a skill needs some energy to be used, you will see a blue text like “1 EN”. Yeah, just like with ammo.

I made a big typo and grammar cleanup for all content up to this point and was amazed at the number of dumb errors that got it. Sorry for the possible inconvenience during gameplay.
Both old and new maps received new cyberpunk bits like billboards to set the atmosphere right. I started the process before releasing v0.1 but didn’t have the time to properly finish it.
Also, I changed some geometry and shadows, including zone transfer points in the main blocks. Added new transfer points to old city maps for players who don’t want to use the bus for some reason.
Added a special sound effect for the first time someone talks with Princess over the SecuLink in the conversation to mark the speaker using it and not present in the vicinity.
Fixed Alice’s portraits and sprites to use the same logic as others. Now she has her eyebrows behind her hair, not on it.
Adjusted logic on exit events in the first story mission, sewers section. Now, the exit zone is eligible for auto-pathing and you can trigger it by walking. Previously, you had to click or use the action button on exit squares to leave the severs.
Fixed a rare bug that leads to HP and EN bars disappearing in combat and status menu.
Cleared grey outline on weapon icons. Compression artifacts no longer exist on these.
Fixed an option to sell upgrades for Kira’s apartment while adding a new one to the store. She isn’t moving out anytime soon and should keep the improvements to avoid trouble with their functions down the line.
Added standard autosave trigger to NetDive puzzle to make it equal with other map transitions.
Placed a shimmering orb on Kira’s PC to mark it as an interactive object since some players had problems figuring this out.
Fixed a rather annoying visual bug in the club. NPC characters could disappear or appear after Ouro loaded the zone. The problem was in the priority of the random generator for the visitors. Now they properly generate before the camera fades in.
Adjusted system effects’ sound volume to on the same level across the board and changed confirm and cancel sounds to a more neutral option.
Fixed new clothes from v0.1 – they didn’t have icons in the inventory though this didn’t affect their gameplay functions.