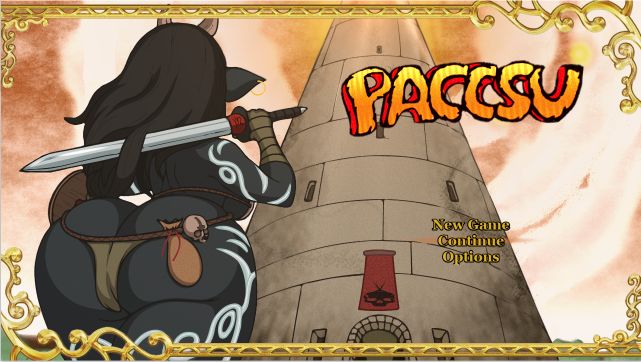 Paccsu APK Android Port is a LEWD RPG game set in a fantasy world called Paccsu. You take control of a Muh’keangirl called Namu, who was taken away from her birth parents at a young age to be a part of a holy ritual in Muh’kea’sdesperate attempt to fight The Undying King, the King of Zombies.

She was taken to the Kingdom of Ruo’ho by a human refugee couple to live by the shadow of the mystical Tukeva Tower, where she would live her life, train and grow strong. 18 years later, Namu is ready for the adventure with the help of her adoptive parents. Namu has no idea what happened in her past or has any memory of it or what kind of power she holds inside her. Soon, Namu finds herself in the middle of a crisis that threatens the whole world.
Namu’s journey begins when she is sent to investigate the mines where dangerous and bootylicious snakes from the Clan Tiss’i have been attacking the innocent human workers. It’s Namu’s job to save the world.”​

All the enemies have new and exciting loot to drop

Misc:
– Made some adjustments to skills/powers/stats
– BewbTek Facility, Imprisoned in Ooze are now part of the main storyline and need to be completed
to continue the story.
– Kiva receives a new power at lvl 23 called Slimopolooza. (All Allies recover 15 Hp and MP, also 15TP)

As Namu is getting ready to battle The Undying King, Purnima is fleeing Mount Tapett’ava with the Voice of Light. Everything seems to go relatively well, but then she runs into trouble.

When you have completed this mission, Purnima will join your party!

Professor Humbledorf has a new task for Namu and her friends. This time Namu needs to head deep inside the mystical Tuho-Tapa Forest and locate the ancient tree called Tree of Tuho-Tapa and drain some sap from it. The forest is filled with mysterious, but dangerous creatures.
Tuho-Tapa Forest is an optional side mission. This mission is available right after you’ve finished Purnima’s Quest, in front of the Mainio Castle.

The Undying King is still the biggest threat to the lives of everybody in the world
of Paccsu, so Jasquel is sending Namu and her friends to Muh’kea to face the King of
Zombies face to face. Namu is sent to the Harbor town of Sata’ma to look for a
captain who will take her to Muh’kea. The captain needs help tho, and Namu needs to
recover his maps and his sword from Tower of Lohik’.

Namu is finally travelling to Muh’kea with her friends and Namu is one step closer to defeating the Undying King once and for all! She still has a long way to go tho…

Namu meets a mystic called Shaaden in Ran’ta. He sends Namu and her friends for their first task to collect the necessary artifacts to get inside the Castle Undying. Namu’s first task is to travel to Temple of Shadows to collect a ring called Ring of Valor. This ring is rewarded to anyone who completes the challenges within the Temple.

The temple is filled with beefier versions of the Undead. They will use their usual lewd attacks on Namu. All of these enemies have new loot!
New Enemies (Temple of Shadows)
Shadow Namu
Shadow Kiva
Shadow Purnima

Misc:
Adjusted the volume of many of the skills
Namu receives a new power called Scorching Blade at lvl 27
Kiva receives a new power called Stimulating Slime at lvl 27 (Party Revive)
Purnima receives two new powers: Viper’s Fangs at lvl 25, Cleavage Sand at lvl 26
Purnima also gets Lightning Reflexes at lvl 28. I forgot to mention this at the last update lol
Slimopolooza now heals 25% instead of 20%. (Kiva)
Kiva has her own unique sprite now!
Some tiny things that I don’t remember right now lmffao

Bug Fixes:
“Scorched” (DoT) actually debuffs target’s fire defense instead of buffing it lmao (-5%)
“Electrify” also debuffs the magic defense of the target instead of buffin it LOL OOPS (-5% all elements, -10% magic defense)
“Disorient” now works too and debuffs target’s physical defense (-10%)
The music button in Namu’s memory room now works correctly and the music continues into the second room too

v0.21
There is a distraught elf girl called Maria Elfenbooben in Ran’ta and she is looking for help. A Thief stole her family heirloom from her home and she needs help retrieving it from the Bandit Hideout.

This sidemission is available after you’ve finished the Temple of Shadows, Maria Elfenbooben is in Town of Ran’ta – South.

v0.20
After Namu and her friends completed the trials in the Temple of Shadows, the hunt for the other key artifacts continue, as Shaaden sents Namu to explore the remains of an old mansion. Only a small cottage remains on top of the remains, but what they find inside is something they never expected. It’s an adventure filled with mystery, tragedy… Human and animal experiments… Human sacrifice… Also puzzles!

This mission continues the story! This mission is available from Shaaden, after you have finished the Temple of Shadows.

There is a very SPECIAL Orb SPECIALIST in here, who can turn your tier 3 Orbs like Lich’s Orb, Inferno Orb, Avalanche Orb etc. into a better version! These Supercharged versions have better stats and more powerful spells. Spells will cost more tho.

New Lewd Scenes:
Kiva’s Creamy Surprise, Animated (Gfycat)
Kiva gets tricked by a guy in Sata’ma, who promises a creamy treat for Kiva.

Location
You can witness the scene in Sata’ma as many times as you want.
Viewing the scene in the gallery will also give you an option to remove Kiva’s clothes!

The newly opened shop in North Ran’ta is selling a mysterious instrument called Flute of the Void. It is said if you play this flute at The Great Chasm, you will wake up The Sleeping One…

Muh’kea Halls is the first part of the final quest of the game!

Magic Shopkeeper in Kaupun’ki will no longer turn invisible after you’ve finished Mainio Excavation Site mission
Mainio Gate Guard will now move if you interract with him the second time (If you haven’t talked to Emperor yet)
(Purnima’s quest) Losing to the Bountyhunter will no longer get you stuck and results in a game over.
Watching Key Keeper “Slasher” scenes in the gallery will no longer remove HUD.
Save Included:

Namu and her friends are finally here – Castle Undying, where the source of all of our problems lies; The Undying King. Namu needs to explore the castle and find her way into the throne room.

A Shark Lady from the underwater city called Kala’hai needs Namu’s help. She needs Namu to retrieve an artifact from an ancient sunken temple called Temple of Vihol, which is guarded by the hostile clan of sharks called the Murderfins. Is it a simple fetch-quest or is there something sinister behind it? Something sure smells…. FISHY…

This mission is available on Ran’ta Notice Board when you’ve received the Tulijoki mission from Shaaden.

Hero Manor is the Emperor’s special gift to Namu and her friends. In Hero Manor you can enable NewGame+! In here you get all the future quests of the game.

In the Hero Manor you can enable New Game+! When you start a new game with this save, you get some new starting gear and bonuses:

How to make NewGame+ Save and starting a new game with it:

Here’s the list of the stuff you’ll (hopefully) find in your New Game+! NOT GONNA TELL WHERE…

I will be focusing on Aida once again, as Paccsu nears its completion. It’s basically 99% done so, GOOD ENOUGH, for now. There’s still stuff to do for sure,  SO:

The link doesn’t work on this