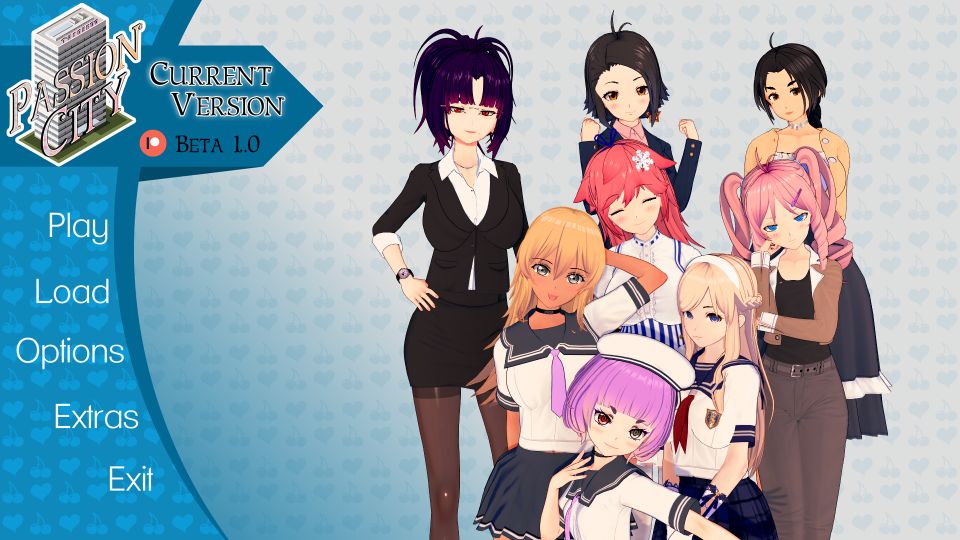 You’re the main character of Passion City. You’ve just graduated from the top of the Hokkaido University and got to start working as an intern in one of the top companies in Japan!
You sign the papers and you’re ready to go!
You’ve been positioned in Jōnetsu, a moderately big city with many places to go and visit. As soon as you arrive you meet the foster family that you’ll be staying with, and later another intern in your company! Start small and grow within the company meeting new people all over the city, build friendships and relationships with many girls in the city.​

Beta 1.1 Bug Fixes:
– You are now only called by your first name if you have two.
– Grammatical issues.
– Added missing BG.
– Fixed store pricing.

Beta 1.3:
New Features:
– Yuka and Hisako can now be asked to flash you.
– You can track items on the top right corner of the screen.
– There’s a Gym in the city where you can now increase your strength.
– Hisako’s plot is now at 50%. (Anna is at 60%)
– The PC at home can now be used! (It allows for the use of cheat codes and to check the progress with all current main girls!)
New Scenes:
77 new Scenes! 27 new H Animations!
Nana: 33 Scenes! 13 of those are H Animations!
Hisako: 44 Scenes! 14 of those are H Animations!

Beta 1.4:
New Features:
-Tutorial has been redone!
-Work Ranks are now explained and shown!
-Side girls are now explained!
-Tutorial is now skipable.
-Work ranks are now accessible on the office!
-Added days of the week to the game and to the UI.
-Nana now has her own music!
-Bathroom has been added (More on 1.5!)
-Day Map has been overhauled!
-Night Map has been overhauled!
-Halloween event can be accessed with hallowevent2019 in terminal as a cheat code!
-Mobile has gotten its UI Fixed!
-Mobile video bug has been fixed! (At least in our tests, hopefully it won’t happen again!)
-Compression!(90%!)

New Content:
-Kozue’s Path has been re-done! (Use cheatcode resetkozue to start her over!)
-Gentleman’s club has been added to the suburbs unlockable after finishing current Azusa’s route.

Beta 1.4.5:
BugFixes:
-Fixed a crash when going to the college.
-Fixed a bug on the beginning of the Azusa’s Scene.

Azusa:
59 New Scenes!
24 of those are H Animations

Kozue:
71 New Scenes!
27 of those are H Animations

Beta 1.5:
– New CG Gallery! (Accessed via PC)
– You can buy a new House when you’re the president of the company! (Visit the Real State Agent in the suburbs!)
– New House Are Fully modelled and Miyo wanders around!
– Miyo is Fully Interactable (Yet Incomplete!!)
– There is now a Casino that you can access to get Miyo, a Slave for your new House! And get in gambling for lootboxes that give you out the CG!
– Fixed the Strip Club not playing the videos.

– Miyo can be asked for sex whenever her affection is above 25% (Her interactions are a bit bare bones but we want to fully expand this in the future! To have a fully fledge tiny slave trainer!)

[Miyo has 37 scenes! 24 are H Animations!]
– She has 45 Sprites in house! (Although she can’t change clothes yet they are ready to be added!)