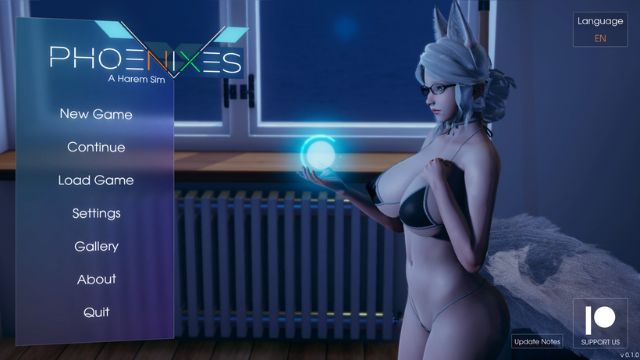 The story of PHOENIXES takes place in a world where both magic and science are well developed, a world where the superhero is really a thing. You, a wanderer in the junction between light and shadow, are now dragged into the cusp of the fight between heroes and villains. The city is falling apart and justice is being corrupted, you will have to take the responsibility and … … … …
Nah, that sounds boring, why don’t you just enjoy an easy life in this urban fantasy world and get all the hot strong beauties in your harem no matter whether they are heroes or villains? That solves the fight too, right?​

Interrogation:
– The interrogation room
In v4, you will be able to unlock the ‘Interrogation room’ upgrade in your club and get yourself a dark little chamber. In the future, this place will become a main ‘battlefield’ for you and the supervillainesses you catch~

Other improvements:
– The club now has a better interface
– Removed girls from your ‘Plans’ who don’t really have a plot yet

– Optimization for the Android version
I think there will be no crashes on old Android devices anymore, but, well, maybe I am wrong, please let me know if you encounter crashes during an animated scene again.

The story:
If I have to sum up the new plots with one word, it will be ‘boobs’. You will get what I mean soon~

Heather, Cassy, Osonia, and Sorring will have new personal plots.

– Heather & Cassy
Your android maid is on duty and she will become your solid ally to help you build your harem from step to step.
And… making Heather your first wife will be her priority~

– Sorring
After that wild night, Sorring and you are both eager to know more about each other… …

– Osonia & Yamir
Yamir’s case has become much more complicated than Osonia expected, and the truth was even weirder than she imagined.

– You can now raise your club level to 3, and a new member will join the club.

I just realized that the girls who have new sexual scenes in this update are actually girls with the hugest tits. Maybe I should start a poll later to see who got the most popular pair of those~

Heather still plays a very important role in the story of v3. As the boss of the Phoenix Project, she is like the center of the people network of the PHOENIXES world. Molly, Cassy, Alnilam… … She is connected with so many unrelated girls. As ‘your’ relationship with her goes deeper, you will have more chances to get closer with all the girls around her too. We want you two’s relationship to have a big improvement with each update… … until all girls that are connected with her are connected with you as well.

Alnilam will come and display her flirtatiousness too~ I’m not really sure if everyone will like her scene in v3 because… … hmmmm… you will find out in the game. Anyway, I just want you to keep in mind that she is a bad woman and she does bad shits. I have no plan to whitewash her at all. The bitchy she acts now, the greater revenge there will be.

Osonia and Sorring, the elf sisters, will have a lot of scenes in this update too. Underneath their glamorous appearance, they are actually in a lot of trouble that you can’t imagine. You have seen how strong and powerful they are in the previous updates, and now you will discover their bitter past, their uneasy present, and their shameful secrets.

The system:
– UI improvements.
Now the bottom right panel has a new look

Now you can see the guidance of how to level up your club too. And all the guidances are now automatically displayed, you don’t need to click on them anymore.

– Optimization for the Android version

We continue to improve the optimization of the Android version in v3. I think now the Android version will run much more stably on low-end CPUs. I’m positive that there will be much fewer crashes and frame-dropping issues. If you still have crashes when loading a save file or an animated scene, please let me know.

We also improved the UI of the Android version, made buttons easier to click, and fixed some resolution problems.

Now animated scenes can be read faster and smoother on the Android version, but I guess it won’t be enough. We will keep optimizing the Android version in the future. The ultimate goal is to make PHOENIXES run without a problem on every Android device that can run renpy games.

– Now your save files will be listed in chronological order

We are still not satisfied with the maps yet, will keep improving them in the future.

Now you can change the wallpaper in your bedroom.
Enter the patron-reward password of your highest tier to unlock exclusive wallpapers.

Story:
– Cassy(Luminary), Heather, and Juliana will have new personal plots.