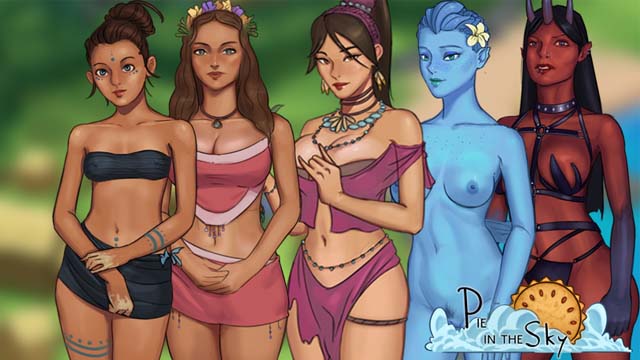 Pie In The Sky is a game about a young man realizing his dream of adventure. As he prepares for the world outside his home island, he meets and develops relationship with a bunch of different characters. He learns new skills that will aid him in his travels, and discover an amazing tropical island.​

Fixes and improvements
– Added remaining night time locations
– Rework of how events work. Now they are dependent on time not on each other
– Better NPC interaction – Random events and dialogues
– Main menu changes
– Music added

v0.4.0
– Introduced lei’s questline.
– Rat attack in the forge.
– Expansion of hera’s questline (multiple scenes)
– Volcano adventure with lei.
– Hera scenes (as a part of questline).
Also, we shipped this build with saves that haven’t been released here (as I’m still fixing up our infrastructure to be a little better than how it started). If you’d like them, please let me know, but honestly our game doesn’t have much grind or downtime at all, so it’s pretty easy to play from the beginning.

v0.5.0
Content:
– Get closer with Tammara!
– Get not as close with Daddy Shark!
– Sleep in a virtual bed!
– Dream about things!
– Kissa now has an outfit for her hideout meeting. You may want to replay that section.
– Added 2 new replays to the gallery.

Fixes
– Cleaned up the Calendar UI.
– Made the cave more visible on the map at night.
– All the shrooms are now clickable to collect instead of just the one.
– Various quest log improvements.
– Fixed a bug causing clickables not to display properly
– Grammatical fixes from previous update
– Fixed a bug causing clickables to not appear correctly at certain parts in the story.
– Fixed a bug causing the boats at the dock to show as their daytime versions after visiting the skullcave.
– Fixed a bug allowing the secret cove to be visited at night.
– Days are no longer 0-indexed.
– Prettied up the day counter, which also no longer uses the outdated time system.
– Character buttons now appear above instead of below the characters.
– Added a safe area around the edge of the screen for whack-a-mole games.
– Added an option to do nothing when using the bed, so players are not forced to skip time once clicking.
– Fixed a bug causing using the canoes in the cove to take you to daddy shark rather than the map.
– Updated a moment with Hera where you take her ladder, it’s now more clear that it’s gone. (It’s still baked into the background, but is now not clickable).

v0.5.0 Ruby Edition
If you’re ruby tier or above, check our last emmerald post for the extra scene code. It’s been opened up to you guys.

Fixes
– Fixed some stage directions not being used correctly in treasure hunt.
– Huge amount of spelling fixes
– Shrooms in the cave now easier to click
– Fixed the web build in so many ways…