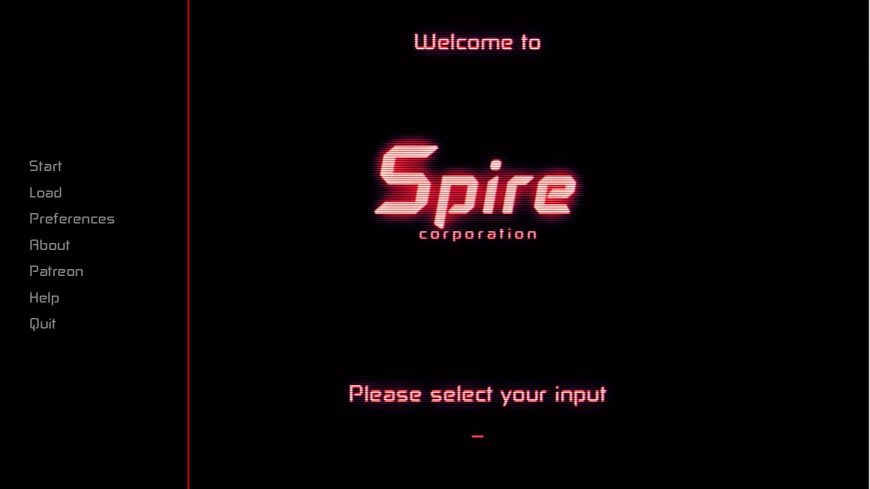 Scarlet Jackson is a young computer analyst that is called one rainy evening to work on a main computer system in one of the oldest and most mysterious companies – Spire Corporation. Although at first Scarlet finds ways to explain occuring events, soon she will uncover that there are many secrets hidden behind glass walls of Spire, and she will be dragged further into strange events and take part in some of the most tense moments of her life.

Scarlet Spire is a science fiction visual novel based on the same-named book, set in a near future. It is first of three books following events of young Scarlet Jackson who takes part in series of events. It also features elements of action, mystery and horror.

Ch. 5
Compressed the renders into WebP near-lossless
Created two versions (lossless and webp) for players to choose
Added alleykat & SS logo movies before the game
Added intro movie at the start of the new game
Added menu click sound
Added proofread English
Cleaned up the code a bit
Added nicer transitions from menus to load, save and quit
Changed few sounds from older chapters
Added Patreon link to main and pause menus
Added Patreon credits and Special Thanks at the end of the chapter

Ch.6
Upped the game’s renders to HDR quality, editing some and rerendering some other renders (global change)
Still having two versions (lossless and webp) for players to choose
Added an icon
Cleaned up the code a bit
New Main Menu shot

Ch.7
Chapter 7 is all about figuring out some very deep secrets, finding out the truth that was lingering unfound through the corridors of the Spire building. It’s about finding more information about the people Scarlet works with, and perhaps solving one of the many puzzles and answering some questions that Scarlet had from before.
What’s new in this chapter?
Well, two things are completely new. We’re doing a new menu system – Scarlet exploring through surveillance, which gives her unprecedented view over the functions of the Spire building, but also a brand new point of view over the things that were, until so far, kept hidden from her eyes.
The other thing this chapter is coming packaged with is the new high-resolution HDR remake.

Ch. 8
This chapter brought animations with it, alongside a slew of new graphical effects and transitions. We also re-balanced the sound volume across the board (specially in first 5 chapters) alongside with tweaking the fading in and fading out of the music so it fits better. To that all, we also added some additional quality of life improvements we do monthly anyway in an never-ending effort to go one mile above and beyond what the game was last month.

Ch. 9
Continues pretty much where Chapter 8 left us with a cliffhanger, and puts us straight into action. It will also clear some things, and answer some questions, and will pave a way for the future Chapters, which are going to have a higher and higher pace to them, the nearer they become to the ending. Chapter 9 is, in some ways, the last Chapter to feature more relaxed atmosphere, before the momentum that was building up throughout several last chapters takes over for the Chapter 10, and onwards.

Ch.10
We’ve seen through Scarlet’s eyes and delved deeper in the last chapter, now we’re bound to see what actually happened to Scarlet after the emergency.
We also get to find out more about some other characters, their pasts and what drives them. And while Scarlet is in the hospital bed in pain – someone else is in even bigger pain in the same time.

Ch.11
Since we’re still working on the continuation, marred with certain issues that slowed down the development considerably, I’ve decided to release Chapter 11 that we released for Patrons two months ago, to the general public, finally. Usually, a previous chapter release for the public would coincide with the date of the current chapter for Patrons, and I have waited for that date – but since two months have passed, have decided to release it for the public anyway. Hope you like it.