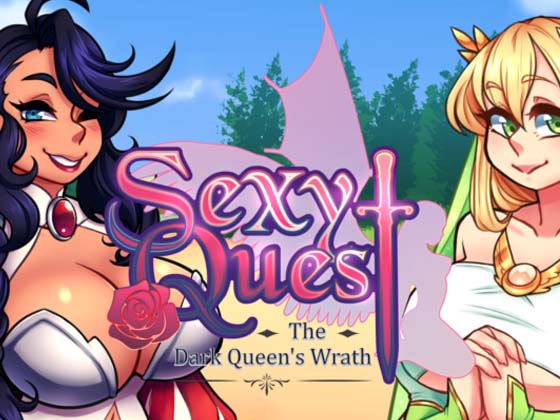 Sexy Quest is a story about a young man training to become a Royal Knight. Things go awry when an evil presence begins her plan to conquer the world at all costs necessary. When an evil power is finally awoken, it’s up to our hero and his team of beautiful women to save the day!

Taking place before the events of Town of Passion, experience a grand adventure with grand cities, vicious monsters, and of course, sexy quests!​

== Beta 0.4.2 Changelog ==
-Fixed issue where Voy Yeur wouldn’t actually take your money
-Added temporary Juliette BJ replay trigger by talking to Valerie after the scene has been viewed once before

Beta 0.4 Contents ==
Welcome to the grand opening of The Woodland Chateau! Just, well, pardon the rennovations..!

A mysterious mansion in Valencia is opening their doors! But first, you’ll need to find the missing chateau members!
Beta 0.4 includes Juniper, the first chateau member that you can rescue. Only if you can solve the mysterious trial ahead!

== Valerie/Act 2 ==
Beta 0.3 was (mostly) a full conclusion of the first act of the game. Act 2 is currently still a WIP but one of the new
party members, Valerie, is briefly included in this update!

Beta 0.5 will focus entirely on furthering Act 2 so stay tuned for more of this new character!

== Pre-Scene Skits ==
Both Dahlia’s Paizuri & Juliette’s BJ scenes have new short skits before they begin. This is a bit of an experiment to see
if this helps add a little more context and flavor before each scene begins without being too dialogue heavy.

I may continue this for some future scenes or quest where appropriate!

== Misc Changes ==
-Small changes to items & icons
-Some shops have been consolidated to help clean up inventory
-This will be a continuous process over future updates!
-Map changes to Clover Highlands & Kingdom Outskirts
-For current & future quests
-Fixed Necromancy not working as intended
-Added silence resistance to Hecate’s Shadow boss

Beta 0.3.1 Changelog ==
-Slight tweak to exp rates & Boss #4’s moveset
-Removed backgrounds in pause menu to avoid visual glitches
-Fixed cutscene switch remaining on after scene 4
-(if your save is affected this should auto correct as soon as you’re in Valencia)
-Skipping bosses on Easy now rewards you in gold to make up for deficit
-Fixed trigger for Dahlia repeat scene

In update Beta 0.3, the party returns to Valencia to finally catch a meeting with the Queen! As per usual, things don’t go
quite according to plan when a new, incredibly powerful threat shows up!

In addition, a few new features/quality of life improvements have been added!

== Sidequests/Quest Journal ==
Two sidequests have been added to the game! Both quests are accessible in Valencia upon arrival. There should be plenty more
sidequests in future updates.

The Quest Journal also has a brief introduction. I do plan to add quest journals to the main storyline as well to help guide
players but for now, it keeps track of the two new sidequests. It comes with a nifty quest tracking feature that may be
useful for certain objectives.

== Fast Travel/Warping ==
As the story continues, you will unlock the ability to warp to previously visited locations! This feature should be useful
as the world begins to open up and more locations can be traversed between.

== Misc Changes ==
-Scene replayability added to the first three NSFW scenes
-A menu option for replaying previous scenes is in the works. I hope to have it ready by the next major update!
-The new scene (#4) will be available for replay after the first new cutscene in Beta 0.4

v0.2.1 beta
-Added some personalized details for characters (more will come soon!)
-This includes type advantages/disadvantages so boss fights may require more strategic consideration of matchups
-Other traits like Affinity are just for lore
-Witch’s Talisman item has been buffed to 50% Dark resistance to compensate for character type changes
-Custom level up quotes!
-Level cap changed from 99 to 50 (pace of the game so far makes this seem more accurate for endgame)
-Fixed bug where Dahlia did not have access to special skills
-Some purple mushrooms now disappear after boss 3 is defeated
IMPORTANT: These changes will be applied to your previous save file as soon as you enter Valencia (prompt will appear)

Beta 0.2 sees the hero’s finally reach the bustling Kingdom of Valencia! As usual, the events of this story don’t go as
smooth as they could when a pesky feline seeks a change of plans.

The Valencia map is a work in progress so it will see additional characters, sidequests, and activities in future updates!

== Advanced Options & Encounter Rate ==
The encounter rate can now be changed in the options menu. You can choose between normal, half, or no random encounters at
all! This should be useful if you feel you are overleveled or just wish to breeze to another area without trouble.

There are other customizable features in the options menu so be sure to play around with the settings to your liking.

== Misc Changes ==
-I added the first of what will be a few different tutorial images. The first one explaining the encounter toggle
-Slight rebalancing/tweaking of classes & skills (this will likely happen in nearly all updates)

Beta 0.1.1
-Added temporary name change NPC on west side of Verdant Planes
-Resetting a character’s movesets also resets their name so this will be a place to manually fix that issue until a
permanent option is added

Beta 0.1 furthers the Sexy Quest storyline and takes our adventurers to a new town! In addition, the Prologue contents
have been tweaked slightly so transferred saves may have some cutscenes popping up in slightly strange times when returning
to Littlewood.

There have been a number of balance changes & tweaks to keep track of but the movesets of the characters has also been
updated. If you have transferred your save, this update will happen automatically as you proceed into the new Beta 0.1 area.

Normal mode is the intended way to play. Bosses will challenge your utilization of the movesets & tools at your disposal.

Easy mode is for those who want a smoother experience with less obstacles. Bosses will be calmer, weaker, and easier to
defeat without much challenge.

For transferred save files, the option to select a difficulty will happen when you proceed into the new Beta 0.1 area.

Thank you so much for playing Sexy Quest!

Please fix ,i keep getting black screen the second time i open the game also i can’t procees to enter the kingdom for some reason