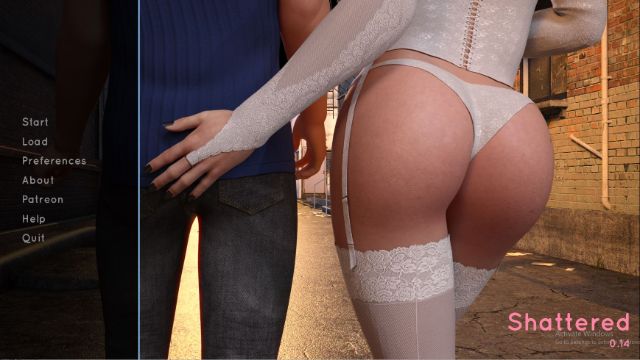 Shattered APK Android Port – You play as Blake Blinn, an unlucky guy who had to grow up in slums, but didn’t really find his way into thug’s life, and due to a series of misfortunes ended up being a maid (yes, a maid) in a rich family’s house. And you decide how he’s gonna deal with this situation.
The game mainly centers around your cruel and sadistic boss (or rather owner) Melinda; her naughty and enthusiastic daughter Rebecca; her business partner Samuel, a dominant and imposing person; and her friendly and lighthearted assistant Liam. And many others! In this house you’ll never be alone. For better or for worse.

v0.18
More than 290000 words, 1038 new renders not counting the backgrounds, 259 new sprites and total nine days for the story. I also recompressed the webp version, which is now significantly bigger, but its image quality is now on par with the png version. I also added music to it, which might cause some save game compatibility issues: report them, please.

v0.17
I no longer make full PNG builds, but you can still install the patch if you were using it before. But from now on I will only make webp versions.
This update is much smaller than usual, but there were reasons for that.
You get 160000 new words in 5 days total, 592 new renders (not counting the backgrounds), partially remade 6th act, 127 new character sprites.
That’s about it.

v0.16
280k words in seven days (in two completely different playthroughs),
1062 new renders (and a bunch of remade ones: v0.5 is remade completely, and v0.6 – partially),
and 170 new sprites.
The full build is now almost 20 Gb, so from now on I will only release patches for it, and even those are pretty big.

v0.14
~250k words
12 scenes (days)
~820 new renders
~370 sprites.
Plus, I remade almost entire v0.4, and — the most important part! — made a new title screen. I’ve heard some people telling me that Blake doesn’t physically change much throughout the game. Yeah, sure. That’ll show them.

v0.12
Eleven new days.
265k words of dialogue.
649 new renders (not counting the backgrounds), and 67 remade ones.
291 new character sprites.
New codex page to keep track of your progression.
And the main point: around halfway through you’ll have to make a choice between two completely separate paths. With some conditions. Don’t miss it.

v0.11
What’s new: 190000 words of dialogues, 436 new renders, 198 new sprites, and thirteen days total for the story, which contain several big, and important scenes.
And on the side note, there’s also a short new scene added to the first act (when Blake is in prison), and you can now avoid Melinda’s route easier (you need to have at least 4 dom points, and either tell her the truth about Blake’s first love or not argue with her about the buttplug in the gym).

v0.10
16 new days.
230000 words of dialogue.
472 new renders, and ~30 remade ones.
New model for Candy (all of her scenes were remade).
270 new renders + 60 character sprites .
You can now get locked on the bimbo route, and get on Suya’s route as well, meet five new characters (one of which will get their own route eventually), and make lots and lots of important decisions. This is by huge margin the biggest update for Shattered so far.

v0.9
Six new days for the story
90000 words of dialogues
170 renders
72 sprites
A lot of very important choices, events and even conflicts.

v0.7
Five new days for the story with some of the major plot points to be determined;
71000 words;
159 renders (100 for sex scenes);
two sex scenes for Melinda and Samuel, one for each of the remaining routes, including secondary.

v0.5
Blake is a redhead now and sports a new haircut which was voted for by my patrons.
Reese’s sprites have been replaced
5 new days of story
50000 words of dialogues
100 new renders and 80 new sprites
Each of the main routes got a new event, as well as most minor ones
Three new types of points that Blake can get: bi, bimbo, and some secret ones that will come to play later.
Music shuffle is back

v0.2
I have to remind you to start a new game, because saves from 0.1 won’t work. I mean, they could, you’ll just get locked out of several routes.
As far as the content goes, we have several new characters, new scenes, new routes, and many, many new outfits for Blake. Which, in my opinion, was the most important thing out of all. Enjoy!

Lana and the Milking Table v0.70