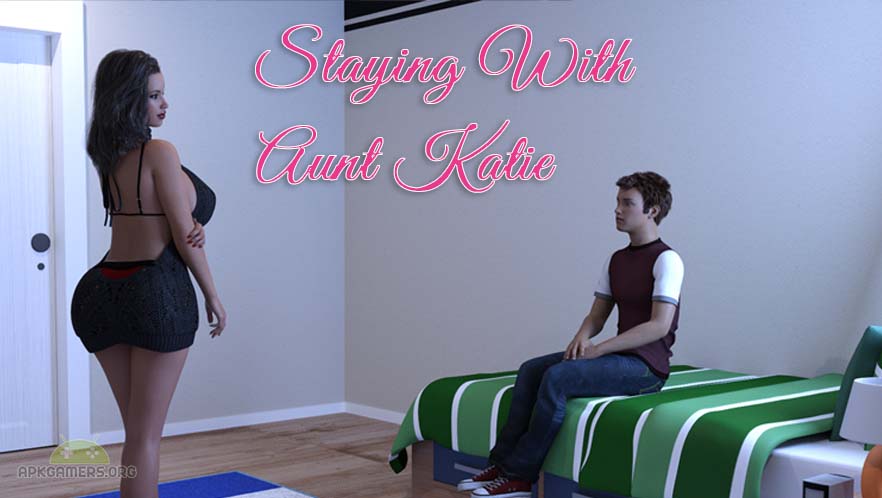 Here’s the intro for Staying with Aunt Katie. I can’t stress enough that this is just the intro — so depending on your reading speed will probably be over in five minutes or so. It stops right before where I plan on putting the tutorial.
A couple of other things about this:

The game uses regular maps for now but I plan on eventually switching over to how Cohabitation is, with an image representing each room and tags to click on. Needing roughly four images for each room (daytime, daytime with Katie in it, nighttime, and nighttime with Katie in it) is time consuming due to having to render them. Hopefully, by the time I upload the first real version of the game, they’ll be done.
In the last image, Katie’s robe has some noticeable clipping issues. I’ll eventually re-do it in hopes of fixing those problems but it isn’t a high priority. In those last two kitchen images you’ll probably notice they’re more grainy than the others. For some reason scenes in the kitchen are extremely heavy renders — the other images took maybe 30 minutes to finish completely at 100% but those two didn’t even get to 50% after an hour of rendering. I’m guessing it’s due to the more complex lighting and shadows but I’m still working on getting better at scene optimizations so I’m not entirely sure.

v0.36
– Added images for when Chris studies. There’s one for daytime and nighttime.
– Chris can now take a shower, which will lower arousal. You can only do this after you’ve seen the first forced HJ scene, since otherwise it’d probably mess up the early game flow.
– On the weekends Chris can swim during the morning and noon periods to reduce arousal. He can also swim during the Afternoon but that will increase arousal. Both the solo and the one with Katie have their own image.
– During the Noon period if Chris joins Katie for a shower he can now ask for a titjob. The only requirement is to have seen the original shower HJ scene.
– During the night Chris can get a handjob from Katie while they’re watching TV together. To see it you’ll need to have watched TV with her at night at least once and have seen the titjob reward scene. This also has a repeatable version.

v0.43
– 69 affection event. After you’ve seen the reward blowjob event and have Katie’s affection at 70 or higher then an event should trigger automatically during the midnight period in Chris’ room.
– Pool event. Once you’ve seen the pool titjob event and have Katie’s affection to at least 50 then a new event should trigger automatically when you go to the pool during the Afternoon period when Katie’s there.
– New cooking event. In the kitchen when Katie’s there during the Evening period, the next time you cook with her you should get a new variation of the event once her affection is over 50 and you’ve helped her cook at least once.
– Repeatable versions of the above.
– Fixed a few issues.

v0.99
– 90 day time limit. I’ve updated the intro to mention it. Also changed the stat menu, so now it reads ‘Total Days: x / 90′.
– Added endings. Once you hit day 90 your ending will then trigger in the Afternoon period. If you didn’t reach the blowjob event you’ll get Ending A. If you reached the blowjob event but not the sex one you’ll get Ending B. If you did reach the sex event you’ll get Ending C.
– Free play mode. After you see your ending you’ll get transported to Chris’ room during the morning period. From there you can endlessly play the game and see events, giving you access to any new events I might add later.
– Ability to replay endings. Once you enter free play mode you can see the endings via clicking on the Menu button when in Chris’ room.
*************
This is technically v1.0 in terms of content but given my track-record with bugs I figured there’d probably be something that doesn’t work right, so I’ll save v1.0 for the inevitable bugfix update. If anything’s broken report it below and I’ll try to fix it as soon as I can. Also, as I talked about in an older post, I’ve been very conservative with my version numbering, basically adding a 0.01 to it for every new scene or feature added, so even if I added every event that I ever had a passing thought about there’s no chance this game was getting to v1.00 that way.
As for the endings themselves, they turned out better than I thought they would. When I sat down to start working on them I only really had vague (and I thought somewhat lackluster) ideas for them but as I began writing them I really got into them and fleshed them out pretty well. They all begin in the same basic way but quickly diverge. Ending A and B turned out to be more ‘bad ending’-ish than I originally envisioned but I like the final result and they make Ending C all the better.
Anyway, I hope you all enjoy the endings and find them a good conclusion to the game. I still have a couple of ideas left for scenes (mostly just regular sex scenes for the living room, pool, and Katie’s bedroom — nothing really major like Cohabitation’s prostitution events) but for now I’ll be moving onto Cursed.
I’ll put up a new post on the 5th talking about what I have planned for June.
v0.55
– New relationship scene during dinner. After you’ve finally had sex with Katie, just choose to help prepare dinner during the evening.
– New relationship scene during breakfast. After you’ve seen the morning kitchen sex scene, just choose to have breakfast with Katie.
– New relationship scene during the night. After you’ve seen the nighttime living room sex scene, just choose to watch TV with Katie.
– New shower sex scene. After you’ve seen the first sex scene with Katie in Chris’ room you can now choose to have sex in the shower during the Noon period.

The Cure for Madness [Chapter 1-5]