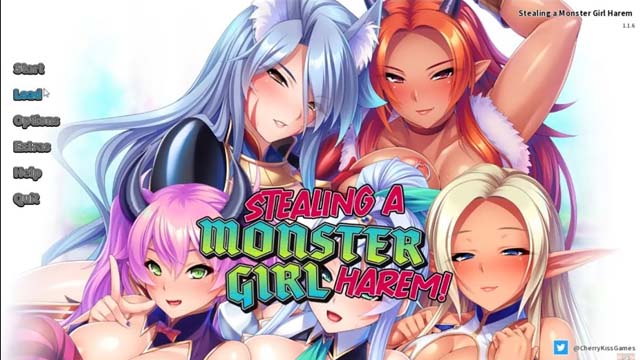 In a boring country town, Kozo’s daily life is changed forever by a terrifying attack,
by a marauding army of Monster Girl warriors. While trying to,
escape the sexy and scary Mea, Kozo avoids Mea’s magical explosions and the cave system collapses,
sending him deep into its uncharted depths.
As luck would have it, this newly revealed area of the cave contains the magical treasure of a legendary thief,
The Silver Rat, through which our hero has bestowed the skills of the Master Thief!
After turning the tables on Mea and successfully seducing her with his own brand of sexy skills,
he sets out on his own quest to steal the loyalty and virginity of the entire Monster Girl army and claim his very own Monster Girl harem!
Dark elves, Onis, Wolf girls, a dragon and more!
With the powers of The Silver Rat on your side, all the sexiest monster girls are yours for the fucking!​

Stealing a Monster Girl Harem Is the English localization of a Visual Novel originally created by prolific Japanese developer Miel. We at Cherry Kiss aim to provide an authentic Japanese Visual Novel experience to gamers outside of Japan.