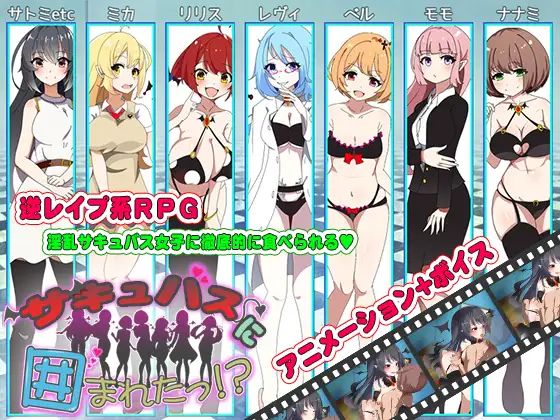 Play as protagonist Tate, and try to escape the succubus manor!
Talk to them once, and it’s instant sex time.
However, you’ll need to acquire some information in order to make your escape…

Will you get lost in the pleasure of sex?
Or will you keep your eyes on the prize, and find clues to aid your escape?

Including some reverse H situations where you go after the succubi too! (Choice-based)

Can Tate escape the succubus manor?

But there is also a device that lets the protagonist turn the tables!

28 scenes in total are included, and they include animations, as well as high-quality
voice acting from doujin industry veterans!

– Tate
A boy who dreamed of being a butler. However, his new workplace is a manor of succubi,
and now he has to escape.

– Satomi
CV: Kanon Yuugiri
The owner of the mansion…or rather, the succubus who brings all the others together.
She looks kind, but who knows if that holds up when it comes to sex…

– Momo
CV: Riia Narimori
An office worker working for the owner’s father’s company.
Not particularly interested in sex, or cum-sucking.
That does make her rather hungry by times though…
It doesn’t show on her face, but she is lively.

– Lillith
CV: Mei Satsuki
Satomi’s servant. Works as the head maid, but isn’t particularly suited to the job.
Not necessarily a full succubus, but is more faithful to the lusty succubus life than some.

– Levi
CV: Pako Shirakawa
An inventor succubus that loves to test out her new creations, including sex drugs…

– Bell
CV: Riia Narimori
An easy-going succubus that earns money through the stock-market.
Loves teasing. If she can do that, and get her meal, she doesn’t care what happens afterward.

– Lala & Lulu
CV: Pako Shirakawa & Mei Satsuki
Twin succubi, and friends of Satomi.
They popped in to the manor after hearing they’d hired a new manservant…

Beatrice in the Crush v1.0