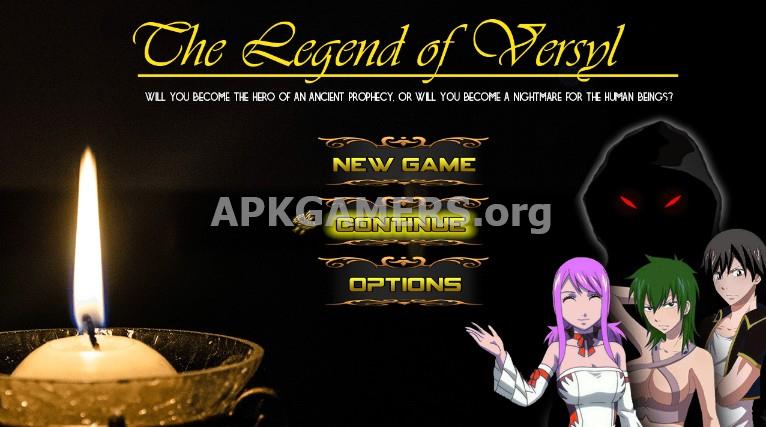 The Legend Of Versyl APK In this story YOU can change the events based on your will. Your character got a Car Crash after losing job and breaking up with his girlfriend and wakes up in a World between the “World of The Livings” and the “World of The Deads”… to survive and come back to the World of the Livings he makes a deal with this Spirit called Versyl, bonding his soul to the Versyl’s spirit.
Now you come back from the dead as immortal human with amazing powers of Mind Control ready to get your Revenge or Save the world from a Dark fate! Choose wisely.​

TLOV 1.2.5 Changelog:
Note: This release was a total upgrade of the game (from core engine files for MacAndroid compatibility, to our sub-engine).
Now you should not experience known bugs and the game should be more fluid and stable.

– Main Plot continues: Vesco, the leader of the Resistance!
– New location added: Bloody Castle’s Entrance
– Now after a battle you will have restored all of your stats
– Now you cannot die (for real) in World of Living (added cutscene)
– Now you cannot die during the first Ratinbode battle (added cutscene)
– New character’s classes stat evolutions
– Master Cheat is now changed.
– Now tapping the dragon in the debug room you will access to other scenes
– Mapped every single npc event in the game with the new interaction system!
– Added possibility to fight in the arena and win prizes!
– Removed the old renting system (a new one Fable-like is coming!)
– Injected Read mind power from the start of the game (experimental)
– Added new Vampire party character: Vesco
– Fixed bug in triggering Amber scenes
– The shop in the World of Gods is finally back!
– Engine Upgrade: Injected in the whole game a new interaction system!
– Fixed bug in triggering yuna dialogue events
– Fixed fertility-items in pregnancy system
– Tweaked the debug menu
– Fixed Collisions homesmiddleworld castle
– Injected new in-battle mechanics
– Injected new time mechanics (special thanks to Vegeta Sama), this have permanently fixed time passing events.
– Skills Tree Fixed (Once you will load the game, it will fix your skills)
– Injected new bug check system: The system will check that all data is correctly loaded when loading a savefile.
– Disabled multilanguage due to developmentdebugging purpose
– Fixed unexpected crash of the game when loading some adult scenes
– Fixed Family Chapel BGM
– Injected achievements items
– Removed Cheat Inserting from Ancient City Temple (You got the debug menu for that)
– Fixed some bugs in the Middleworld’s Castle
– Added new skills for human class
— LV2: GuardDual Attack
— LV3: Double Attack
— LV4: Triple Attack
— LV5: Bodyslam
— LV6: Shout
— LV7: Meditate
— LV8: Quick Move
— LV9: Strong Attack