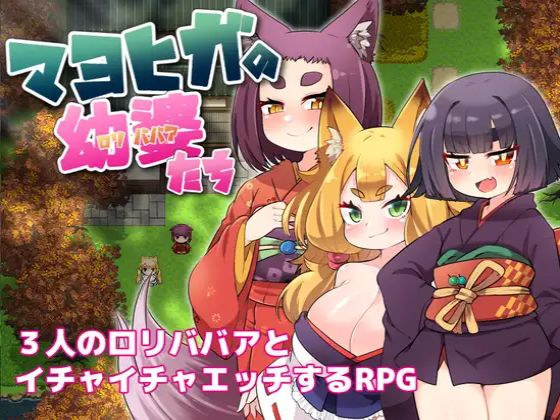 The main character is a boy who comes to visit his grandparents in the countryside every year.
However, the boy does not play with anyone in the village, and instead goes into the forest alone.

Deep in the forest is a place called Mayohiga.
There is a small store, a shrine, and three mysterious girls.
It was customary for the boy to play with the girls there, who spoke and acted in an old-fashioned way.

This year, however, the girls seem to be a little different…?

The protagonist has come to stay with his grandparents in the countryside, as he does every year.
However, he has no one to play with, so he wanders off deep into a forest by himself,
before stumbling upon a place known as Mayohiga.
There, he finds a tiny little shrine, and 3 strange girls who speak rather old dialects.
It’s apparently customary for boys to play with these strange girls, but something seems amiss about them…

A light and simple ero RPG about 3 ancient lolis having frisky fun with a shota.
There is some light exploration, but no battles.
Chat up the lolibabas, and find items that trigger H scenes.
Once you’ve viewed a scene, you can repeat it any time by begging the associated lolibaba.