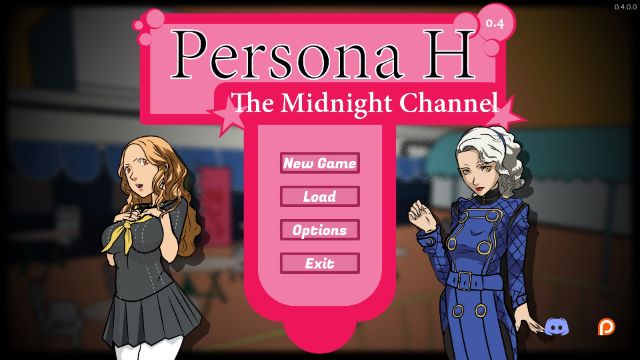 Welcome to The Midnight Channel, a place where your darkest desires can come true.
You were sitting alone in your room when the clock struck midnight. You felt the tv suck you in, and now you are in the Midnight Channel.
Shadows are out of control, they are bored and crave entertainment. With the help from Teddy, you are going to make sure they stay entertained.​

* fixed a bug that crashed the game when talkig to Marie with her Goth outfit.

* fixed bug that caused chie to float in her room.

* Added back in the Sell All button at the Slime Miner.

* Fixed the Rfeine All button not giving correct experience.

* Added in music for Halloween Event

* Designed Character Models for the PArty

* Worked on Ticket System to collect during event

* Fixed bug that occurred when gifting Naoto before talking to her. It was crashing the game, now it has stopped.

* Made it so that Chie only goes to Junes on Wednesdays now.

* Implemented Dojima into code of game

* Designed a Community Unlock photos for 50 Patrons on Patreon

* Added in another adachi scene in Okina city where he mentions something about Shadow Girls!

* Added in a message to play when there is no girl home at the moment, this is to help with confusion when there isn’t a girl around.

* Created a Dojima Vs Adachi scene

v0.7.2
Bugs:
– Fixed a bug where Rise was showing up in Naoto’s dialog
– Fixed a bug where only buying Yu’s black shirt didn’t let you look at the dresser.
– Fixed performance on MAC and Linux builds. Should run better now for both platforms
– Resolved a graphical bug with Browser Edition loading incorrectly at start of game.
– Various small bug fixes or grammar corrections.

Features:
– Added an optimized way to display buttons ingame, makes game run slightly faster.
– Added Slide transition to buttons when talking to girls.
– Added something new with the treamill. Use it to discover this. Keep in mind it is not complete, don’t go crazy
– Changed Password for Super Secret Password

v0.7.1
Bug :
– Fixed a bug only allowing Endurance skill to get to Rank 5. Now it can be maxed out.
– Fixed issue where Back button at Kanji’s store causes error
– Added in the 0.7 to th main menu. Got missed during transition.
– Stopped Ai from being in two places at once!

Features :
– Designed Okina City Downtown
– Designed Chagall Cafe
– Created buttons to navigate to these locations
– Worked on Naoto’s introduction to Detective Agency scene.
– Designed Naoto’s Detective Agency
– Worked on Naoto’s introduction scene for ‘Cases’
– Worked on Secret Door for Daidaras
– Changed design to Save file slots and Sprites shown in slots.
– Changed design to some GUI elements
– Added in Coffe and Espresso as items to buy at Chagall
– Added Undine as a worker at Chagall Coffee
– Designed Naoto’s Hanjob Scene
– Added in Gift funcitonality for Naoto
– Created Naoto’s Talk to Scene
– Created Naoto’s Spend time with scenes
– Worked on Naoto’s casework scenes around Inaba
– Added in Naoto’s tasks for the Task tracker so you can check what to do next.
– Fixed the script a bit for the tracker moments.
– Coded in Naoto Sex Scene
– Added in Naoto’s Request
– Buttoned up sections for Naoto to remain at Rank 3 for now.
– ReDesigned Chie’s Sex Scene
– Implemented new scenes into Chie’s Sex Scene

v0.7.0
Bugs :
– Back button now deletes after selecting Yukiko at the Steamy Bath Room
– Ai is now Ai and not Chie.
– Fixed a bug that causes rise’s story to not show the lines correctly.
– Made “Yu” the default Main Character name. Can be changed to whatever you want, but this was added in for players that don’t care.
– Fixed a bug when attempting secret code on door in Daidara’s
– Fixed a bug where you could open the iTed while having the menu open.

v0.6.6
Bugs :
* Reworked the Max all girls code so that it doesn’t block the palyer from progression.
* Fixed Browser Edition issues. Allowed it to keep up with Regular Updates. This was due to a bug in the Blur effect.
* Fixed the Chie thighjob bug, Old trigger was used and I converted over to a new trigger system for it.

Features :
– Created Rise Demand in her Talk to Rank 8 Scene
– Created Rise return item scene, after finding her lost item somewhere in the game.
– Created Rise Talk to scene for rank 9
– Created Rise talk to scene for rank 10
– Added a iTed color change section to the settings app
– Added an Ignore Mode checkbox to the Settgins app on the iTed
– Ignore mode makes it so that you won’t receive phone calls from girls.
– Allowed Rise to Rank up to max rank of “Obsession”
– Changed look of Rise’s Name card in top left of her room
– Created a “Task Tracker” system to show you what to do next with the girls.
– Added in Chie’s tasks so the Task Tracker can be used on her.
– Created an introduction audio for Main Menu depending on which girl you get.
– Implemented new Lunamistxx voices throughout game
– Reworked sex scenes to incorporate new voices.
– Added in Rise’s new voiced lines into the entire Rise script of the game
– Added in dialog for Aika during the Aika storefront and Sex Scene.
– Added Aika into the Home screen
– Added Task Traker for Saki
– Moved Close button for Gallery photos
– Designed a Marie Selfie
– Implemented Marie selfie into the game.
– Changed look of Exit Screen for Patrons
– Added in the new Rise Anal Scene
– Added in Anal Request for Rise
– Completed Rise’s storyline to get to Max Rank.
– Added Task Tracker for Rise.

* Removed the night restrictions when using the Train station.

* Removed Bug on Shadow Road which can crash game. was creating instances randomly.

* Fixed Achievements bug where achievemenbts would pop for no reason.

* Added in custom portrait for Ping at the Fox Shrine

* Created a “Random Variable” to be used in later updates

( This variable makes sure that every game has a sense of “randomness” applied to it. 1 experience may differ from the other.)

* Created different colors for the bottom right menu button. This tells me which number the game has landed on for that player. Will be used for future functionality

* Added in King Shadow as a dialog character, this way he can show up throughout the game.

* Added in King Shadow as the Movie Theatre’s Clerk.

* Created the Browser Edition for release

* Redid artwork for All of Ai’s love collar sex scenes.

* Added some of the new Yukiko voice acting into the game.

* Integrate Ai’s redone artwork into game’s sex scenes for Ai and her Requests.

* Added in movie genres to the game code

* Added in Move genre favorites to all girls

* Added in dynamic dialog for all movie going experiences and combos

* Added girl affection points when taking her to the movie

* Added a date mechanic that tracks if the player has dated a girl that day.

* Made the movie cost money

* Created achievement for watching a movie

* Added in Rise Talk to scene 4

* Added in Rise Talk to scene 5

* Added in Rise Talk to scene 6

* Added dialog to let player know that this is the content available for Rise right now.

* Added in Naoto dialog explaining she is coming out in 0.8

* Added a core spirit to your player

* Fixed an audio transition issue when music was lower than 50%

* Added a slide effect to all Avatars

A Reflection In Your Eyes [Completed]