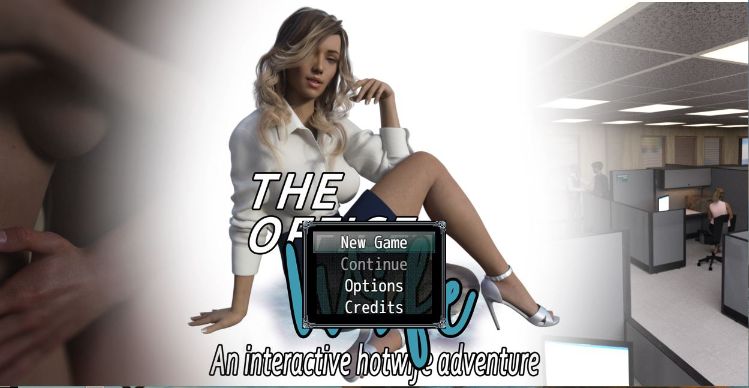 The Office Wife APK Android Game – you play Stacy Jones, recently married and newly employed at a fairly typical office job. When a mysterious amulet lands in your hands, however, your life begins to radically change. Consumed by desires and impulses you’ve never felt before, you’re soon wearing less and less to work and indulging not just your new husband, but just about any man who wishes to partake.​

V.0.83 Public Release
Finally! Here’s V.0.83 Public Release! This one’s been a long time coming and has a ton of new content and changes.
On top of the many scenes (a mostly-complete list can be found in the walkthrough), I made a number of bug fixes, changed the dialogue system, and updated the map for Stacy’s apartment to better reflect the actual layout. Not counting the new character images, there are nearly 500 new renders and 39 new animations. Believe it not, this is only one part of the current story arch. There are many other pieces to put into place that will come in the next release.
There have also been several fixes added since the PRERELEASE last week. These include adding in missing image files, fixing the Simon scene (where it would repeat), fixing a few issues with Stacy’s new apartment (which would cause her to spawn inside unpassable furniture), fixed the solo gym shower scene, added a cumshot scene to the final scene of the release (Doug Dinner), and several other minor changes. It should (knock on wood), be running pretty smoothly.
Save Slot 35 starts where the previous release left off (beware that installing the patch version will overwrite older saves) and the other saves are from various points throughout the game.

v0.80 Public
I have fixed a few bugs and made a few grammar/text changes since the Prerelease, but the content is nonetheless the same.

v0.80 Pre-Prelease
256 new renders and 8 new animations, plus a number of small fixes.

v0.25
Greetings fellow smut enthusiasts. The new update for $5 and up Patrons is linked below.
What’s new in this release? A bunch of stuff. Over 300 new renders, five animations, and more than a dozen new scenes (big and small). Stacy is beginning to accept the changes she is going through, though she is still driven by a desire to discover just what happened to her and where the necklace came from.
New scenes with Jim Slater, Nate, Jason, Marcus, Knockers, Dixon’s, Michael, the Doctor, Zack, and more.
For those who are playing from the beginning or earlier saves, I have fixed two major bugs from the last version. The first was one where Polly would not trigger and the other was one where the Doctor event would turn on, but nothing would happen yet you’d still be prevented from going to work. Both of these should be fixed now (I have played fully through with no problems).
I have also included a slot 21 save that picks up right where the last release left off.
The walkthrough is already posted on my website at www.jsdeacon.com/game
The game is becoming less linear, too, so you shouldn’t have to follow it precisely by the walkthrough. If certain events aren’t triggering, just keep playing. The game will end at the end of the update.
If you find bugs, no matter how small, please pm me on patreon or email me at [email protected].

v0.40
– Almost 200 new renders
– 14 new animations
– Updated all scenes with Stacy’s new outfit
– Added a Hint system (just press “t” to toggle on and off)
– New scenes with Zack, Andy, Jim, Jason, Dixon, Marcus, Michael, and a few new characters
– Three new small easter egg scenes
Walkthrough (key choices, but feel free to explore around town):
Work out with Zack
Talk to Marcus at work in the morning
Have lunch with Andy
Go to Dixon’s after work
Talk to Michael in the morning
Work with Jim Slater
Talk to Jason before lunch
Work out with Zack
The rest should play out automatically – end at Enchantment 33.

v0.51
Gallery – through the bedroom mirror (this is only partially completed)
Audio – new music and sound effects throughout the game
New maps – park, Jessie’s apartment, Jessie’s neighborhood, Night District abandoned subway station
Bug fixes -too many to list – (there was a “null” error popping up in random places – I think this is from a plugin conflict. I’ve made some adjustments and haven’t been able to replicate it. Hopefully, it’s fixed, but if not, please screenshot it and send it to me. I’m very interested in figuring out what’s going on.)
As always, if you find bugs, have comments, feedback, or suggestions, please message me on here. I love hearing from you all.

Episode 2 v0.1
~ 2000-3000 new lines of code
~ 450-500 new renders
Added cheat mod to the game ( please only use it if you’re stuck in btw options or else don’t otherwise the point system becomes useless)
Fixed almost all the bugs found in earlier episodes
(Specially the boutique one too)
Fixed typos found in earlier episodes
Gallery and credit section not updated for this release.

v0.51
Gallery – through the bedroom mirror (this is only partially completed)
Audio – new music and sound effects throughout the game
New maps – park, Jessie’s apartment, Jessie’s neighborhood, Night District abandoned subway station
Bug fixes -too many to list – (there was a “null” error popping up in random places – I think this is from a plugin conflict. I’ve made some adjustments and haven’t been able to replicate it. Hopefully, it’s fixed, but if not, please screenshot it and send it to me. I’m very interested in figuring out what’s going on.)
As always, if you find bugs, have comments, feedback, or suggestions, please message me on here. I love hearing from you all.

v0.66 Public
A couple of notes about his release. It is a bit more linear than some other release simply because it is really the second part of the previous release, concluding Stacy and Jessie’s revenge plot. The two halves were each too big to fit all in one release in any reasonable amount of time. This release has nearly 400 new images and 25 new animation clips.

I have included 10 save files starting at points throughout the game. Save slot 40 starts where the last update left off. You can reach Enchantment 48 and the release has a fixed ending. It is possible to reach the ending without getting all 48 enchantments. If that is the case, you can either replay from save slot 40 or wait for the next release.

v0.67 Public
I was going to wait until the next big release to release some of the bug fixes I’ve made, but the current bugs are cropping up too often, are game-breaking, and create a poor user experience. Thus, I decided to do this interim bug-fix release. There is no new content in this release, so if you have played through the latest release without issue, then it is unnecessary to download this one.

Also, you’ll find some of the early gameplay changes I’ve made for the next release to help reduce some of the tediousness of the early game. This includes long-requested reduced dream sequences and truncated warehouse scenes where it was just a repeating event. That said, while I think I have worked out most of the kinks in the new warehouse sequences, I may still have missed something. If you spot anything weird (like a wrong outfit), let me know! I have also added some additional scenes to the gallery, which is still far from complete.

v0.78 Prerelease
In this release you’ll find nearly 400 new renders, 16 new animations, and some major storyline advancements. It comes with a Walkthrough file and saves. Save slot 39 begins where the last release ended. This release has as hard ending so you’ll know it when you get there. If you miss something, you can go back to an old save and replay it, but you should be able to get the main content before the hard ending.

The link for Android is not working,pls fix it