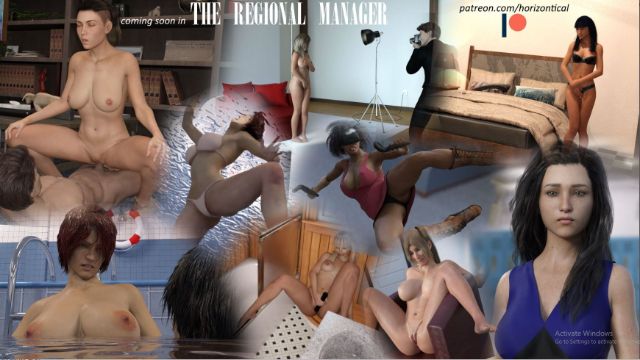 The Regional Manager APK Android Port – You are an ambitious businessman in his mid twenties.
You are temporarily in charge of the regional branch of an important Electronics company.
You have 60 days to make it great again. Be nice or not… it’s up to you.​

V0.0.61
-Added a new Cecilia event at night in the RV with two possible paths
-Added an event with Sharon in the college locker room (Requires Kelly’s event with the Kevins and meeting Dr Zywelter)
-Continued the Brenda / Kelly event.
-Added the doc and his assistant and the lab. No content for his assistant yet.
-Modified dialogues with Meredith regarding the gas leak.
-Tied Meredith speaking at the conference with knowledge about the gas leak.
-Added a mini event with Jessica at the pool.
-Added new swimsuits for Leah at the pool.
-Melissa will now talk to you again after you got all the pics from Joey.
-Updated quest log and game guide.
-Fixed bug that made the game crash with grid overfull error when entering Meredith’s room.

V0.0.53
(Be aware that there is not much nice content for now)
-Continued the storyline of Natasha and Mitchell.
-Added new patron sponsored scene with Audrey.
-Added a way to access Claire’s photoshoot and locker event if you missed it.
-Added more possibilities to convince Joey to give the last batch of Melissa pictures.
-Fixed a continuity bug with Cecilia where she acted like she had sex with MC while she had not.
-Made the sex events with Cecilia and Emma easier to repeat.
-Whitney won’t be working at the city hall if you see her at the hospital.
-Changed Taylor and Whitney schedules: Taylor will work for two weeks + days when you see Whitney at the hospital.
-Changed Max and Jessica Schedule at the pool so that you can see the mayor at 5 and Max at 6PM.
-Fixed a bug that kicked you on the map when closing the comp after checking some cams.
-Fixed a bug that allowed others to pop in the locker Shower while Alexy should be there.
-Fixed the mayor’s loop about ‘introducing MC to Natasha’. Gives you access to police cam events.
-Fixed a bug that made Samuel answer when you knocked on RV and disappear inside.
-Fixed a bunch of hospital bugs.
-Fixed a bug that prevented Android players from getting Natasha in the office
-Fixed a bug that made special items show up when you bought a normal item from the store.
-Fixed a bug that prevented the player from getting affinity while playing Basketball with the captain if fitness above 18. Added a dialogue with the captain to quickly fix the affinity issue.
-Prevented Samuel, Cecilia, and Leah to show up at the pool before they are in town.
-Checking home cams from the laptop will now be synchronized with who is actually in the room.
-Fixed a ton of typos

-Fixed a few bugs on the quest log hints.
-Fixed a bug with the collectibles gallery, the phone contacts, and the spycams screen.

-Fixed quest log entries for Claire’s Dilemma and Kelly’s Ordeal.
-Added existing quests with no quest log entry to the quest log
-Miko can now search the archives for you.
-Fixed a bug that prevented daily quests from resetting if MC slept in his bed.
-Fixed a bug that prevented the nice path for Brenda to show up.
-Added the possibility to hide all completed quests from the quest log.
-Prevented some locations to pass time while leaving.
-Fixed a bug that let Brenda rain even repeat.
-Added lockpicks and basic content in office locker and at Audrey’s home.
-Added some content regarding Kelly and Melissa.
-Improved the way the quests with Stacey stops for now.
-Fixed a bug that made the RV party lasts an additional 24hours.
-Natasha now actually works at the office.
-Added placeholder event for Dr Miraz.

-Completely reworked the way the computer worked at home and in the office, including :
-Complete rework of the spycams.
-Addition of a memory minigame to earn money out of work.
-Complete rework of office work.
-Added a bugfix menu for potential broken quests after updates.
-Changed some work locations so that you could access phone , quests, etc directly from there.

-Changed dialogues if you play basketball with the captain after the conference.
-Added dialogues to the police station people (Megan, Stacey, Gordon, Michael)
-Added a spycam to the police locker room.
-Added a minigame to earn money out of work (access from computer).
-Added a weekly event with Alexy (WIP)
-Initiated buildup to hire Natasha to clean at the office.
-Added chain of events with Bobby and Andrea.
-Completed phone requests for Andrea.
-Reworked Andrea’s scene when you confront her
-Reworked Brenda’s scene when you find her in Audrey’s office
(Both of these can be accessed through the new replay feature of the computer if you have already played them)
-Added a few dialogue options if you go to Audrey’s house at night.
-Added a bunch of new options during Leah’s events
-Added new dialogues to start a new quest chain with Miko + mini events in the archives (WIP)
-Continued Emma/Doug storyline.
-Added the first Claire photoshoot.
-New event with Kelly and the Kevins in college.
-Slightly changed options with Cecilia in RV.

v0.0.31 – December 11th 2020
-Fixed loops in the archive files.
-Reworked Audrey’s whiskey event a bit.
-Removed a bug that let you blackmail Audrey from the start
-Fixed traceback error with conference dialogue with Claire.
-Modified special store and how you unlock items there.
-Gave more use to fitness
-Added a “less extreme” cheating mode.
-Reworked dialogues with Max (lifeguard) that lead to Aisha’s event.
-Fixed a few other androids jpg bugs (some might remain…)

v0.0.3 – December 6th 2020
Gameplay / Features:
-Added or fixed more quests to the quest log. (WIP)
-Added a cheating button on some screens (the binary code on top right corner)
-Change the way the game is archived (for faster bugfix updates)

Bugs/Fixes:
-Fixed the bug that crashed the game while confronting Andrea about sneaking in
-Fixed the bug that left 2 references to Audrey’s photoshoot in the journal
-Fixed the bug that left the last person you talked to appear on the employee screen in your office
-Fixed the bug that prevented the game from knowing Audrey was in her office
-Fixed several loops at the photoshoot with Audrey
-Fixed the loop at the basketball event with Andrea
-Fixed the loop with the RV party
-Added options to replay some events (such as photoshoots, RV party…)
-Various other typos and small bugs
-Android bugs:
-Fixed the bug that made the radar crash the game on android.
-Fixed jpg crash in Brenda’s office intrusion event.
-Fixed jpg crash in Audrey’s whisky bottle event.
-Fixed jpg crashes at home with laptop, punching bag, and tv.
-Fixed jpg crash in the Archives with Miko upskirt event.
-Fixed jpg crash when you went to meet Artemis at delivery time.
-Fixed jpg crash when visiting Audrey at her place
-Fixed jpg crash when visiting Leah’s room at night
NB: PLEASE NOTE THAT THE JOIPLAY EMULATOR WORKS VERY WELL WITH THE GAME ON ANDROID.
v0.0.2
For 0.0.2 I focused mainly on helping the player to know what to do (still a WIP) and on porting the game on android. I still added some content though.
Gameplay / Features:
-The game is now playable on Android with scaled UI.
NB: Some pics might not load correctly, tell me if this happens !
-Reworked the relationship screen and replaced numbers by color-coded hearts.
-Renamed like and dislike as Affinity and Animosity
-Added more quests to the quest log. (WIP)
Content:
-Refined the beginning (Disclaimer & presentation of the game)
-Almost completed the conference quest.
-Additional content for some characters:
-Leah (she can wake up when drunk)
-Meredith (animations while sleeping)
-Melissa (flashing if she likes you)
-Miko (set up date with the Captain)
-Melvin (if present at the conference with his glasses)
Bugs/Fixes:
-Fixed various story bugs
-Fixed a few typos.

v0.0.1b
Here’s a few quick improvements I worked on in the last few days to make the game more enjoyable (or at least I hope so…)
Gameplay / Features:
-You can now name the MC.
-New option early on in the game to avoid some of the grinding, until a I find a better solution
-Streamlined the early content a bit through the quest log (WIP)
-Added a special object to help you know who is where and when
Other than that :
Bugs:
-Corrected all missing images.
-Fixed some issues where conversations were stuck in a loop (eg Bobby in warehouse)
-Fixed various story bugs (all those that were pointed to me plus a few others.)
-Fixed a few typos.
Content:
-Leah’s introduction is a bit different.
-RV party event was changed a bit.
-The path to rent Dom’s photo studio is now much less irritating.
-Fixed several dialogues that were just “not done”, to flesh out the content a bit.
-Removed some of the renders of Brenda and Audrey in the shower (those with droplets)