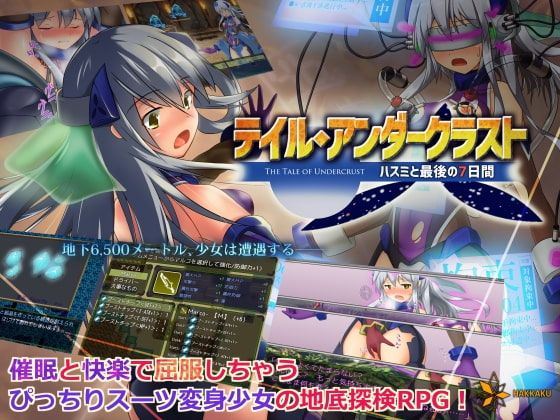 Into the world of 6,500 meter below in which no one has stepped foot yet——

Hasumi meets an android who claims to come from the future
in a smattering of language, making her skeptical.
In order to avoid a meteorite impact that is scheduled to befall
seven days later, the two go deep into a huge crater lies
at the foot of Mount Fuji. Herds of weird creatures live in
the underground world which, perhaps, will have either
a girl vigorously brandishing a sword or……
** Game Overview **

Over 30 species of enemies have their unique H skills that each falls in two categories:
* Entwining on her body, binding and hindering movement…… [Restraint]
* Getting her turned on even during battles…………………………[Hypnosis]

Choose one of two battle styles considering effectiveness against specific enemies.
Keep being careful during battles, or she may get subdued by Restraint x Hypnosis……
Her pose art changes in relation to H parameters during battles!
“This can’t be, I must not be swept away……” See how she is gradually driven into a corner!

There are more than enemies and equipment hidden in the dungeon.
Seek out the secret key item in the very depth of the dungeon!
“Can’t forget the enemy’s attack……” She uses enemies’ items
to suppress her carnal desire. The bliss given to her during battles
makes her lose reason even on bed……! (10+ patterns)

* Seven Dungeons For Seven Days. Explore All Around The Near Future Sci-Fi World!

A wide variety of fields from a shady mine to a vined underground wetland
and enemies await Hasumi’s arrival. Let’s get people’s help to progress the story.
It seems like ones in the cave are not quite related to the base……?
(estimated playtime: 7~10 hours)

* All H Scenes Illustrate Sweet & Pleasing Sexual Torments From The Heroine’s Point Of View!
She will be enraptured syrupy-sultry by non-humans’ caress and hypnosis in most situations.
Over 30 base CGs. About 40% of H scenes take place with hypnosis!
Reminiscence room is available / When you win a battle, corresponding H scene will be unlocked

* Mainly Defeat H, And Some Events In The Base Have Multiple Stages
There are in-battle H, defeat H and corruption by pleasure H at the base!
Will Hasumi be able to withstand the hypnotic attacks constantly given to her!

* “It’s More Than Enough!” A Lot Of Exploration Trivias
You will find tons of stones in every corner of the underground world!
You will have become an expert of stones for sure! Let’s inspect stones
by using chemical, heating with fire magic, dissolving in water,
scrubbing, licking and watching carefully over light!