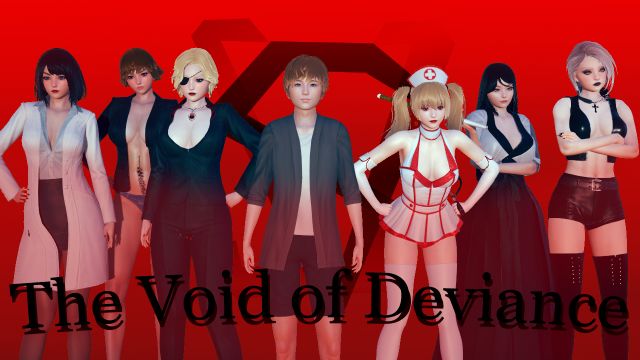 You travel to Sylventhia Island for a job opportunity at BanKval. However, the island will offer, give, and take much more than your prospective career.
Meet and interact with various characters and try to uncover the mysteries of the island and the irregularities happening around BanKval.

The story so far is a prologue before moving into the actual gameplay. The prologue will finish when your one-month internship ends at BanKval. Although this is like an intro to the game, it will also include early endings for those who want to explore a kind of “What if I was rejected from the position at BanKval?” scenario.

The story revolves heavily around the theme of female domination, and the kinks will be accordingly so. The game will often explore the extreme kinks and fetishes of femdom, however, each above-vanilla kink will be skippable. So you do not have to worry about witnessing something you would rather not.
(Keep in mind that there is a points/values system that tracks your choices with the characters, so you might lock content with them if you shy away from their demands. Think of it as an “affinity” of the character towards the protagonist. Therefore make sure to explore each option. Content you chose to omit will not be affected by this. They will still be avoidable. )

v0.1.4 is out!
Main Content:
Astrid’s Bondage Path. The end of her content has a marker at her final Bondage Level 6 Scene where it says that it is the end of her bondage content for now.
Side Content:
Various Work/Task Content, as well as a new location and characters that can be unlocked by triggering a quest on your laptop.

I hope you enjoy the update!

v0.1.3 is out!
IMPORTANT: After you reach the end of prologue (“EMERGE ANEW” Choice) the game will *close*. When you re-open the game, Continue by pressing on *START*. The prologue ends there. You will see that an extra button on the menu as PROLOGUE is added, you can replay the prologue from there. To begin the actual game and continue to the gameplay, Press on START at the main menu. After a short intro and tutorial, you can access your stats, phone and map. After that you can simply continue your progress by SAVE/LOAD. Sorry if it was confusing, I hope you enjoy this little interaction

v0.1.1 is out!
This update continues the sampling route in the prologue, offering sample teasers for more kinks. Currently, every kink I have tagged should be covered.
-There are five choices for erotic scenes with 5+ women, 2 of the choices being sub-divided into 2 different characters.
-If you have blocked content with Isla, for example if you blocked coprophagia, you still will not see it despite it might be indicated in the choice as (Piss/Scat). But if you have blocked both urophagia and coprophagia you will not get a choice for Toilet Play, for example. So keep that in mind.
– I tried a few jabs at animated scenes in this update but improved it on the next update, so please excuse my un-aesthetic handling of some animations.
Thank you  <3

Can you make the void of deviance walkthrough or cheat mod tq.. just ask

Between Salvation and Abyss [Chapter 1-7 Part 1]

Master of the Harem Guild [Completed]