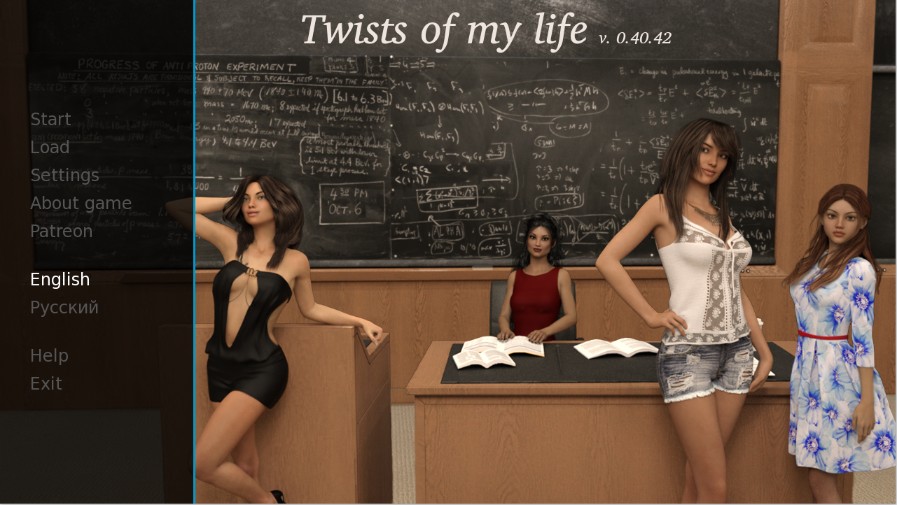 So what is the game about?
You are student of a law school in the city “N”.
You live a normal life, study, meet different people and etc.
In short, you do what most people of your age do.
At a certain moment you get yourself into problems which cause the need to move and so the story begins.
I work hard on personality of characters and emotional part of relationships between people.
Sexual life of main character hasn`t been left behind as well. All the scenes are written in a vivid, vivacious manner and strengthened by a good graphics.
You will meet different characters in the game.
I try to make everyone special with own personality, habits, not just different models of DAZ.

v0.99
– 4 characters (Alanna, Helga Helena and Ann) received a conclusion to their story.
– 10 new endings were added to those that are already in the game (Irene’s endings are yet to be added)
– The update adds 560 new renders, 10 animated scenes and 19800 words.
– The current total amount of words: 137830 words. 3180 renders,
– Endings with three different characters (Alanna, Helga, Helena) each of which has approximately the same amount of content.The Ann’s ending is bigger than the rest of them only because it has two mutually exclusive branches.
1) Helga – 3 endings;
2) Helena – 2 endings;
3) Alanna – 1 ending (bad endings where she dumps MC were implemented earlier in the game);
4) Ann – 4 endings;
Disclaimer. You will not find a walkthrough for the 1.0 update since there’s no need for it. The ending is a result of your previous choices.
The build’s number is 0.99 only for convenience of the developers. Once we’re ready to roll out finished final update, it will be called 1.0
Attention: 1) Do not use saves made during animations, you won’t be able to use them later 2) If you have a working save created earlier in the game, it will be fully compatible. If you see error messages or crashes, use a different save. No need to start a new game.

v0.97.02
What you’ll see in this update:
– Alanna’s branch is nearly finished. It has a number of different possible scenarios in it;
– Chance to meet Irene again with a different ending;
– Some more secondary endings were added.

v0.95.12
– Helena’s branch hot fix (04.12.2018).
– If you follow Helena’s branch, it’s highly recommended to load a save that was made before sex in spa-salon.
– This update continues Helena and Alanna’s branches. Helena’s story is about to be finished while Alanna’s story is 2/3 finished.
– In this update I’ve applied a new method of creating sex scenes. I’ve been receiving messages in discord for a while on how to make these scenes better but so far, I couldn’t do anything due to GPU and time limitations. Now when I have a new GPU and rendering time is way faster, I can do more renders and animations thus I can add more interaction to sex scenes.
– As I’ve already said, the 0.95 update contains 310 new renders, 13 animations and about 9.5k of words.

v0.90.08
This update contains 330 new renders, 10 animations and about 10k of words. There are new events with Helga and Ann. This is the last update before their stories are over. You can also meet one old character who has received some new content.

v0.85.07
Consists of 225 renders, 7 animations and about 10k words.
This update has expanded story of basically all characters. It will end storylines of Irene and Thea. Helena, Helga and Alanna’s stories will be expanded. There are also events with Ann but they use old renders.

v0.81.08
This update will add 195 renders, 5 animations and 8k words. There are 6 new events, two of which are pretty big. You can’t see all new content in one playthrough.

v0.71.13
Bug fixes and small changes
The well-known bug:
You can run into Ann even though, according to the game, she moved out. We’re well aware of that bug and we’re afraid to changet it yet. Once the game is completed we will delete the scene where she decides to leave. That was a bad move which caused us a lot of problems.

v0.71.12
Recommendation for using old saves.
Those who played 0.6.05. version:
You should load a save which was made before the sex with Alanna (we’ve found a bug in a parameter when the MC decided whether to stay or leave)
If you followed another branch (no events with Alanna) then there shouldn’t be any bugs. If you played the 0.6.04 version or lower, use the developer’s saves or saves made in the 0.5 update or previous versions.

Helena and Helga’s branches are expanded. We also added one new hidden event and two events which use old renders. The update consists of 194 renders and 3 animations.

The shower scene wasn’t planned. I did render for the contest’s participant and it turned out to be good so after getting participant’s agreement I added it in the game. That’s why shower scenes look the same.

v0.62.05
General recommendation: Start new game or use developer’s saves.
Saves which are not from this version will not work in 0.7 update.
1) The update is from 60% devoted to Alanna, but there are also events with characters from previous versions.
2) A total of 255 renders were added and 2 animations that consist of 15 frames each and about 10k of words
3) New fetish was added, titjob.
If you see basically no new content during your playthrough, it means that you follow one route that didn’t get a lot of content in this update. Therefore, you can wait for next update or play again with different choices (decisions in the game can strongly affect the main plot)

v0.51.01
1) Use your saves of the 18th day during game in order to avoid any bugs. Do not use saves of the 19th day.
2) The size has been decreased due to change of pics format, from PNG into WEBP
Besides routine sex with Ann were added two new sex scenes. One new event with Helga. The english version of the game contains 52000 words. The 0.5 update added 203 new arts and 3 gifs. Regarding a bug when MC’s looking in the mirror at his bruise and the art is misplaced, we are well aware of that and it will be fixed in the final release.

v. 0.40.42
Use your saves from the 16th day during game in order to avoid any bugs. Do not use saves from the 17th day, the bugs which you ignore will not allow you to play the 0.5 in the future.
Continuation of the main plot. 9000 words.
205 pics (70 of them are sex scenes).
2 animated sex scenes made up of about 20 arts.
Half of the pics from the previous updates were updated to higher quality.