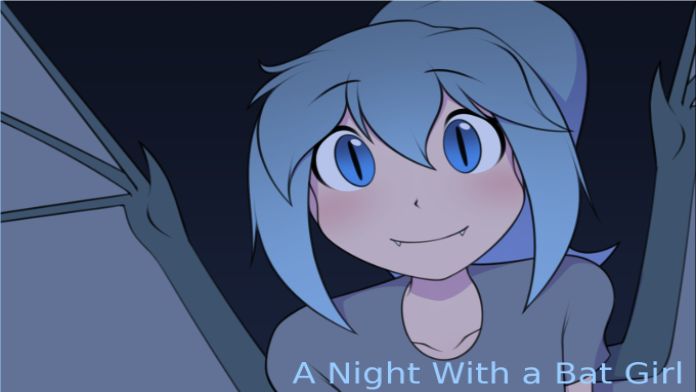 A Night with a Bat Girl v1.0 [Completed]

A Night with a Bat Girl is a short game with a large number of branching paths and endings about a bat girl named Dreamscape who’s looking for somewhere to spend the night when she ends up at your bedroom window.​

v0.2
This is the first explicit update as well, adding in the first adult scenarios.

v0.3
The entire “anything?” sequence has been fully fleshed out, so enjoy! The only thing I need to add there is a new sexytime song.
There are now 21 images, 7 songs, and 6 replayable scenes unlockable in the gallery.

v0.4
The holidays kept me from working on the game for a bit, but an entire new route is now done! That leaves just a couple more routes to finish up.

There are now 29 images, 7 songs, and 10 replayable scenes unlockable in the gallery.

v0.5
Another route done. One more main route to go!

There are now 40 images, 9 songs, and 13 replayable scenes unlockable in the gallery.

v1.0
The final game contains 55 images(with most having multiple variants), 9 songs, and 17 replayable scenes (some of which contain multiple scenes).

This is also the first update with a completion percentage, which should tell you how much you have left to collect in the game in the gallery and at the end of each route. Unfortunately, the completion percentage does not work with old save data, so I recommend deleting your renpy save data in AppData/Roaming/RenPy/ANightWithaBatGirl before starting the game.

If you start the game, you’ll need to clear both the file in appdata and the save folder in the game’s folder.

I also made a version for Android phones.

Download files for A Night with a Bat Girl

File is unavailabe in mega

my mega account is banned, please use mirror link